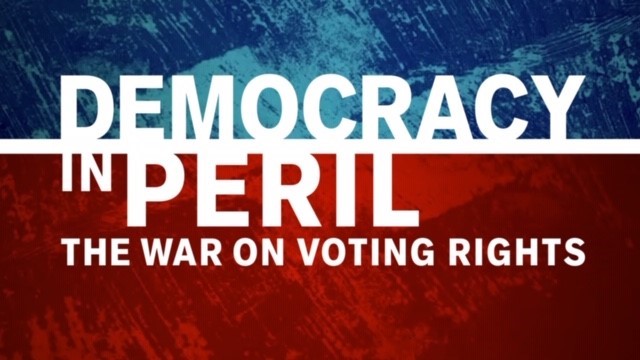 Just days away from midterms, voter-suppression tactics have become a flashpoint in the upcoming November election. Since 2010, twenty-three states have passed new voting restrictions, from limits on same-day registration and early voting, to strict photo-ID requirements.

On Friday, November 2nd, at 11pm ET, CNN will air a special report entitled Democracy in Peril: The War on Voting Rights, which investigates the wave of battles over restrictive voting measures passed in largely Republican-dominated states in the name of voter fraud. CNN’s Kyung Lah speaks with some leading voices fighting for voting rights in America, including former Attorney General Eric Holder, who, together with former President Obama, launched the National Democratic Redistricting Committee, aimed at blocking restrictive voting laws, and helping the party win majorities in state houses and the senate ahead of the 2020 redistricting process. In Las Vegas, Nevada, Lah speaks with former Missouri Secretary of State Jason Kander, who launched “Let America Vote,” a political action committee that fights what it calls Republican voter suppression efforts and in Milwaukee, Wisconsin, Lah embeds with the ACLU’s Molly McGrath, who, together with volunteers, knocks on doors in some of Wisconsin’s poorest neighborhoods, urging residents to register to vote. Voting rights advocates, like “Give us the Ballot” author Ari Berman, tell Kyung Lah, that voter suppression is a Republican strategy aimed at curbing the Democratic vote—specifically minorities, first-time and older voters, and was one of the key factors that threw the traditionally blue state of Wisconsin to Donald Trump in 2016.

Kyung Lah also sat down for a rare and candid interview with Kansas Secretary of State Kris Kobach, who has championed harsh laws on voting around the country and headed up Trump’s short-lived presidential advisory commission on election integrity.

As redistricting looms large in many states, this eye-opening CNN Special Report drills down on gerrymandering, the redrawing of maps to empower a political party. In Madison, Wisconsin, Lah meets with the plaintiffs of the landmark case, who gather to strategize as they await the Supreme Court’s decision.

CNN Special Report: Democracy in Peril: The War on Voting Rights airs Friday, November 2, at 11pm ET. The special will re-air Friday at 3am ET and Saturday at 9pm ET.

Democracy in Peril: The War on Voting Rights will also stream live for subscribers on Friday, November 2, via CNNgo (at CNN.com/go and via CNNgo apps for Apple TV, Roku, Amazon Fire, Chromecast, Samsung Smart TV and Android TV) and on the CNN mobile apps for iOS and Android. The special will also be available the day after the broadcast premiere on demand via cable/satellite systems, CNNgo platforms and CNN mobile apps.