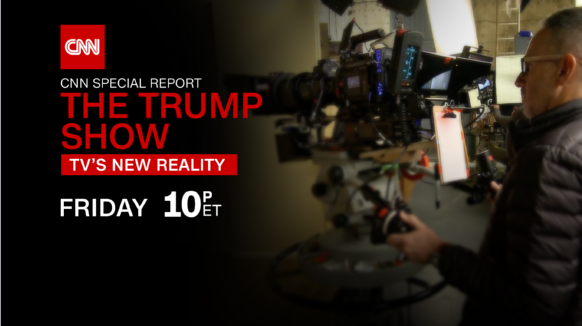 The president is taking over TV. Not just the daily news cycle, but prime time, scripted television. Channel surf and you’ll find the reboot of Norman Lear’s new era sitcom, One Day at a Time, featuring a Cuban-American family battling racism and immigration, Black-ish, the show that tackles the president and hot-button political issues head on, and Will & Grace, a sitcom that was revived because of the election of Donald Trump. Roseanne, the blue-collar, mega-hit sitcom, that featured a Trump supporter, blew up after Roseanne Barr’s racist tweet, but is making a comeback, minus the star, this Fall.

The president dominated scripted dramas too: FX’s American Horror Story, began in the wake of the 2016 election, with Trump as the actual “horror.” On CBS, Madam Secretary grappled with the 25th Amendment, Showtime’s Homeland, centered on an administration based in Washington D.C. dealing with “fake news” and Russian interference, and on Hulu, the eerie The Handmaid’s Tale captured the lightning of the current political environment, with parallels made between real America and the dystopian universe in the series.

Suddenly, TV show runners are ripping up scripts and rethinking premises, because of a president who transformed their scripts into nonfiction. With rare access on studio sets, inside the writer’s rooms of some of TV’s most popular shows, and conversations with America’s top TV-makers, such as the legendary Norman Lear, actor and producer Rob Reiner, Alex Gansa and Howard Gordon, the showrunners of Homeland, Bruce Miller, the creator of The Handmaid’s Tale, Will and Grace co-creator, David Kohan, One Day at a Time co-creators, Mike Royce, and Gloria Calderon Kellett, Ilene Chaiken, the writer and showrunner of Empire, Barbara Hall, the creator of Madam Secretary, and Robert and Michelle King, the creators of The Good Fight, CNN looks at how television has been transformed in the Trump Age. Together with these voices, TV’s funniest and most dramatic clips, and critics, CNN senior media correspondent and host of Reliable Sources Brian Stelter examines the impact of President Trump on TV, and the blurred lines between entertainment and reality.

Tune in on Friday, July 20 at 10pm/2am ET/PT for the one-hour special report where Stelter will explore this cultural phenomenon in the age of Trump.

About CNN Special Reports
CNN Special Reports is the award-winning, in-house documentary unit focusing on in-depth and investigative reporting of major issues and events and the powerful human interest stories that reflect our times.