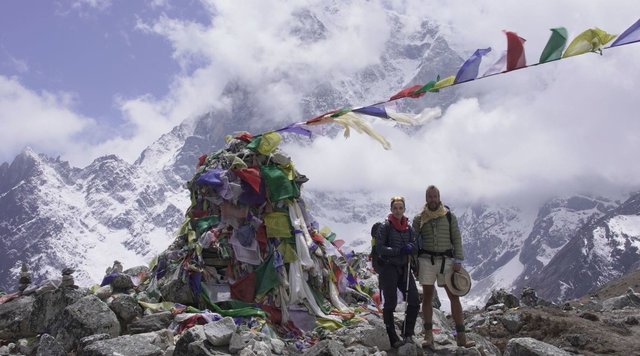 This month’s programming highlights on CNN International, including shows such as The Challenge: Everest, Business Traveller and Living Golf:

In the first part of the ground-breaking documentary, The Challenge: Everest, broadcaster and adventurer Ben Fogle and double Olympic gold medallist Victoria Pendleton CBE face the greatest challenge of their careers as they attempt to summit the world’s highest peak.

CNN International exclusively follows the pair, who are guided by renowned mountaineer Kenton Cool, on the two-month expedition to try and reach the top of Mount Everest.

During the expedition and in Fogle’s capacity as UN Patron of Wilderness, the team looks to highlight the beauty of the pristine Himalayan Mountain region and are ensuring their climb is an ethical climb. In addition, the expedition is backed by the Anything is Possible Foundation and is in support of the British Red Cross.

On this month’s episode of Business Traveller, Richard Quest sits down with Qantas CEO Alan Joyce on board the new Kangaroo Route, the first-ever nonstop passenger service from Australia to London. The programme explores the flight’s aviation milestone, the long-haul sleep science in which passengers are participating and the remarkable $2 billion turnaround by Qantas.

The programme also sees Quest flying on the original Kangaroo Route as it was in 1947, making multiple stops in multiple countries. After spending the night in Cairo at a grand, historic hotel and visiting the great pyramids, Quest meets Egypt’s first female tourism minister to examine the country’s effort to bring back travellers.  Finally, Quest visits the ancient city that was the final stop on the Kangaroo Route, Rome.

This month, The Circuit comes from one of the most prestigious races on the calendar – the Monaco Grand Prix.

Covering the glitz and glamour that makes it so famous, the programme also features an interview with Ferrari driver Sebastian Vettel and honours Maria Teresa de Filippis, the first female Formula 1 driver who made her debut at the Monaco Grand Prix 60 years ago.

On this month’s episode of Living Golf, host Shane O’Donoghue heads to Adare Manor in Ireland to spend some exclusive time with Rory McIlroy ahead of the U.S. Open.

Over the course of three days, Living Golf takes an in-depth look at McIlroy’s career at this seminal point in his life.  On the surface many things seem perfect for the 29-year-old. Recently married, a jet-set lifestyle, millions in the bank. Aside from Tiger Woods, he’s the biggest name in the game. But there’s an intense, burning desire that drives Rory and always leaves him wanting more.

The programme finds out what’s next for McIlroy’s career as the golfer discusses the pressure of not winning a Major for almost four years and his hopes for heading into the second major of the year, the U.S. Open.

This month, Mainsail heads to Italy as the Mediterranean racing season gets underway in Europe. Here the idyllic, rugged, cove lined island of Capri plays host to its namesake, Rolex Capri Sailing Week. Now in its 64th year, the event has become an institution in Italian sailing – this edition sees the introduction of the Regatta dei Tre Golfi, an overnight sprint from mainland Naples to the island.

Host Shirley Robertson heads to the stylish fishing harbour of Marina Grande as it’s overrun by the regatta’s entrants to take a look at some of the world’s sleekest racing machines.

Back on the mainland in the port city of Trieste, there’s further excitement for Italian sailing as one of the country’s most loved sports teams, Luna Rossa, launches ‘TP52’ ahead of their debut at the five stop TP52 Super Series.

The programme goes on board the Luna Rossa, the official Challenger of Record for the 36th America’s Cup, and Robertson meets the newly unveiled challenge team as they get set for the season ahead and has an exclusive interview with Prada CEO and Luna Rossa team owner Patrizio Bertelli.