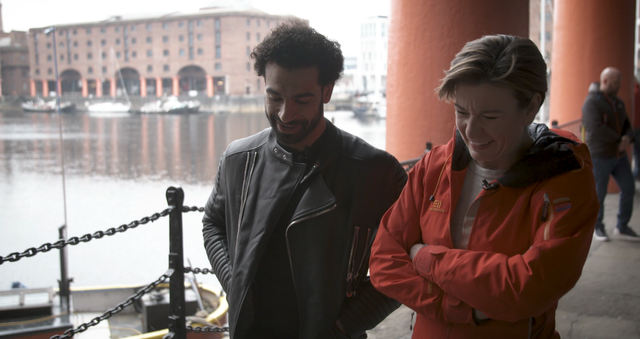 This month’s programming highlights on CNN International, including shows such as Inside the Middle East, Mainsail and Living Golf:

No Arab sportsman has grabbed the headlines quite like Egyptian footballer Mo Salah.  His record-breaking season has catapulted Liverpool FC back to top table of European football and seen Salah compared with greats of the game, Lionel Messi and Cristiano Ronaldo.

In an Inside the Middle East special, titled Mo Salah: Liverpool’s Egyptian King, anchor Becky Anderson travels to Liverpool to meet football’s newest superstar, a man who rose from humble beginnings to conquer Europe and who’ll carry the hope of a nation on his shoulders at this summer’s World Cup.

Art can be found everywhere. From public parks to the most prestigious auction houses, to walls around the world. The demand for art is on the rise, reaching nearly $64 billion in sales in 2017, thanks in part to one of the largest art markets: China.

This brings Talk Asia to Hong Kong, where for the fifth year in a row, Art Basel – one of the largest art fairs in the world – is setting up shop. The programme takes an inside look at the world of art through the eyes of American graffiti artist and sculptor Brian Donnolly (aka KAWS), art collector Patrizia Sandretto and gallery owner David Zwirner.

For years Mexico struggled to attract star golfers to compete in the country. But two years ago, it won the rights to host one of the four World Golf Championships, the game’s biggest series of tournaments after the Major championships. The tournament moved from one of the courses President Trump owns in Florida. This month on Living Golf, presenter Shane O’Donoghue reflects on the WGC-Mexico Championship and meets the man who put the deal together, Telecommunications CEO Benjamin Salinas. The programme finds out what it means to Mexican golf to have such a prestigious tournament played there and how it can help grow the game.

Living Golf also visits one of the world’s most popular golfing destinations, Cancun. With a coastline and climate to match anything the U.S. has to offer, many Americans are spending their dollars on golf trips here. O’Donoghue plays two of the standout courses in Cancun, both designed by the great Jack Nicklaus; and finds out from the 18-time Major champion about the competition between design firms in building in such a prosperous region.

Lastly, O’Donoghue plays a round with Mexico’s greatest ever player, Lorena Ochoa. The programme looks at out how she took on the best players of America’s LPGA tour to win two Majors, 25 other tournaments and become world number one. Now retired from professional golf, Lorena hosts CNN en Español’s golf programme Vive el Golf. The programme features her at work when she interviewed Jordan Spieth recently at the WGC-Mexico Championship before finding out where she thinks the game is heading in her country.

Fifty years ago, nine hopeful pioneers set off from different ports to make a lap of the planet. Only one man completed the gruelling feat, and, in doing so, became the first to sail solo, non-stop around the world. Half a century later, in recognition of that milestone in exploration, a group of hardy adventurers are preparing to take on the same 30,000 mile journey.

MainSail looks back at the stories to come out of that first ever Golden Globe race back in 1968. Host Shirley Robertson meets the 1968 winner Sir Robin Knox Johnston, who explains how he and his boat Suhaili, which at 32 feet was one of the smallest in the race, survived the remarkable voyage.

The race was the precursor to the current Vendee Globe, a 74 day sprint around the planet in cutting edge, high-end monohulls, but this year’s reenactment of the Golden Globe is expected to take four times longer. In homage to the nine original entrants, the participants, including adventurers like firefighter Kevin Farebrother, who has mounted the summit of Everest three times, will depend on traditional skills of seamanship, paper charts, astral navigation, 30-year-old boats and the prospect of nearly a year alone at sea.

Robertson previews the race and catches up with some of those who will set off from Les Sables later this summer, to find out their hopes and fears, but above all, what has inspired them to take on such a gruelling challenge.

In this special half-hour edition of One Square Meter, the programme heads to Greece to explore the impact of foreign capital on the world’s property markets how overseas investment and the desire to attract it is reshaping the cities in which we live.

The Greek economy, after years in depression, is slowly getting back on its feet; helped in part by foreign investment in its housing market.

Leveraging the digital age, e-auctions are the new way houses are bought and sold in the county, enabling foreign investors to snap up a Greek property no matter where they are in the world.

The programme meets the CEO of Piraeus Real Estate, who were the first to launch an e-auction platform in 2017 and one of the many foreign buyers who has purchased a property on the site.

In a half-hour special hosted by Nicki Shields, CNN Equestrian covers all the action from the Longines Global Champions Tour and Global Champions League. From Miami Beach to Shanghai to Hamburg, the best show jumpers in the world will compete for the title Champion of Champions 2018.