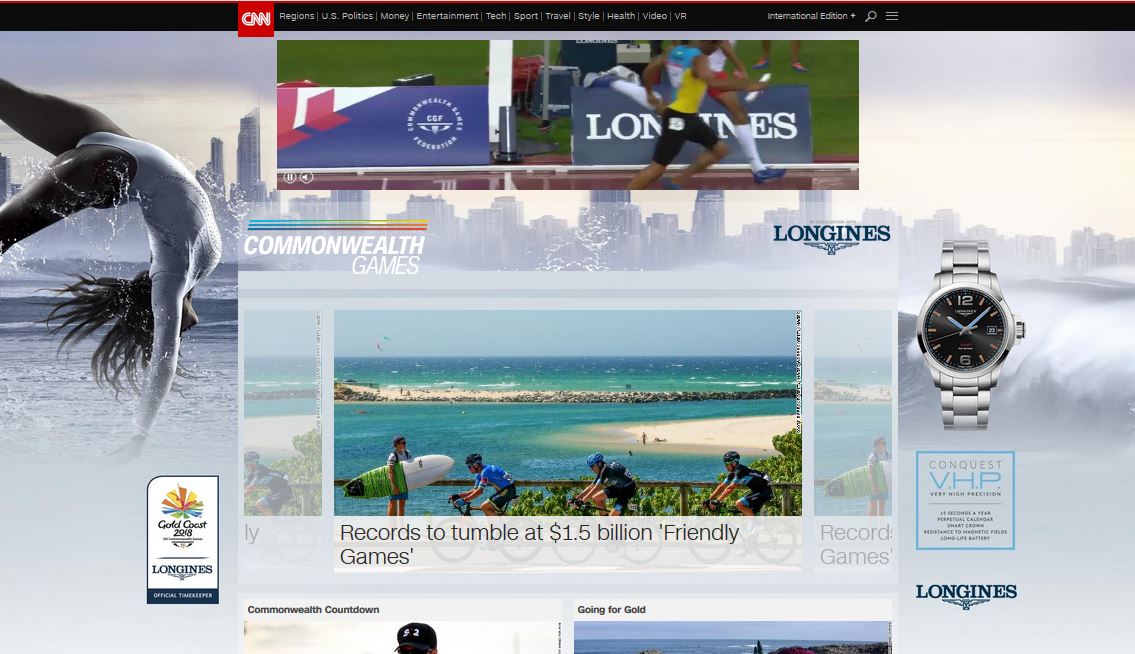 Longines is collaborating with CNN International Commercial (CNNIC) for a multi-platform campaign to raise awareness of the Swiss watch brand being the official timekeeper of the Gold Coast 2018 Commonwealth Games.  This is the latest campaign in a longstanding partnership that raises awareness of Longines amongst CNN’s global audience which includes sports enthusiasts.

In the run up to the event the ‘Longines Commonwealth Countdown’ has been broadcast during CNN World Sport. A series of 60 second interviews, with a product placed Longines timekeeping clock, featured athletes from a range of countries who each represent key disciplines of the Commonwealth Games.

The Commonwealth Games campaign builds on the long relationship between Longines and CNN, including the multi-year sponsorship of leading horse racing show Winning Post and ski show Alpine Edge on CNN International and CNN Digital.

Petra Malenicka, Senior Vice President, Advertising Sales, Western Europe and the Americas, CNN International Commercial said, “We are delighted to extend our long term strategic partnership with Longines to the Commonwealth Games.  The multiplatform campaign delivers an excellent opportunity for Longines to amplify its association with the Commonwealth Games amongst our influential global audience and to convey the Longines brand values through an innovative and impactful campaign.”

Mr Juan-Carlos Capelli, Vice President and Head of International Marketing, said: “As the Official Partner and Timekeeper of the 2018 Commonwealth Games, Longines is proud to join forces with one of the world’s most prestigious broadcasters to promote this important major multi-sports event in the Commonwealths’ nations and territories, and beyond. CNN, as per Longines, attaches great importance to reaching the highest standards in every campaign, and this new collaboration will be the perfect platform to express the brand’s values of tradition, elegance, performance, and of course precision, as timekeeping is at the heart of our communication, through programs such as the “Longines Commonwealth Countdown” or the “Longines Record Breaker” report.”

CNN International Commercial (CNNIC) is the division of Turner International responsible for the business operations of CNN’s properties outside of the United States. All the commercial activities for brands such as CNN International, CNN en Español, CNN Arabic, CNN Style, CNNMoney and Great Big Story are aligned within the division. This encompasses the marketing, advertising sales, sponsorship partnerships, commercial content development, content sales, brand licensing, distribution and out-of-home operations for the world’s leading international news provider. CNNIC is a recognised industry leader in international advertising sales and its use of award-winning commercial content, produced through its Create unit and driven by its advanced data usage and digital capabilities, has resulted in strong and enduring partnerships with many of the world’s most recognised brands. Its Content Sales and Licensing unit has relationships with more than 1000 affiliates ranging from licensing the CNN brand through to content supply contracts as well as offering consultancy services. CNNIC has offices across the world, with key hubs in London, Hong Kong and Miami. For more information visit http://commercial.cnn.com