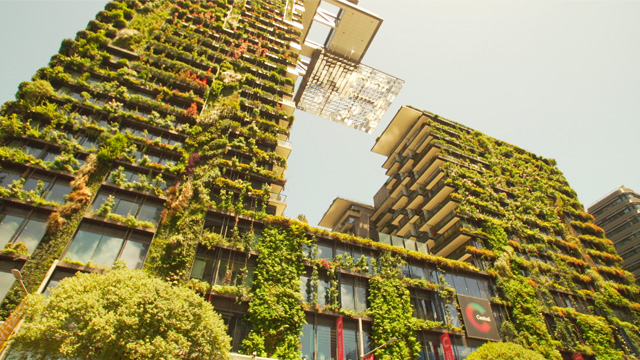 By 2050, the world’s major cities will be crowded by six and a half billion people. Pollution, inequality and changing climates threaten the living standards that cities can offer. Yet people designed these problems and people can design their solutions. Join CNN International Correspondent Matt Rivers as he presents inventions from 5 diverse cities that are embracing sustainable projects which combat the pressures modern cities face. CNN’s ‘Innovative Cities’ meets with innovators in the UK and Ghana that are turning to natural resources, yet surprisingly reducing their carbon footprint. While scientists in the Netherlands and India are finding ways to protect their citizens from the ravages of climate change, whether it’s rising sea levels or extreme temperatures. And in Australia, a new approach to urban planning melds nature with modern cool in the world’s largest vertical garden.

Highlights of the 30-minute special below:

You’ve heard of the Opera House and Harbour Bridge. But Sydney’s newest landmark is a mixed-use sustainable development that’s redefining urban planning. It’s called Central Park – and the last two buildings in this $2 billion complex are nearing completion. The award-winning centrepiece building, One Central Park, sold out almost as soon as it opened and features the world’s largest vertical garden. It was designed by an “all-star” architectural collaboration that included Jean Nouvel.

The cool roofs initiative is a simple solution with the potential to save lives and protect those most vulnerable from the harmful effects of climate change in Ahmedabad, India. It is part of the city’s heat action plan to reduce the number of heat related deaths. Anjali Jaiswal, Senior Attorney and Director of the India Initiative of the NRDC (Natural Resources Defense Council) and Dileep Mavalankar, Director at the Indian Institute of Public Health Gandhinagar elaborate on their plans.

London architects are embracing ’21st Century Timber’ as a low-carbon construction material. With the huge amount of water and energy that’s required to build with cement and steel, some construction sites in the UK are turning to engineered hardwoods, such as cross-laminated timber, to cut down on time and waste. The prefabricated building materials can be fine-tuned to the architect’s specifications and are lighter—weighing a fifth of concrete.

Ghana’s first fecal treatment plant is cleaning up Accra and providing sustainable energy. The country’s first modern treatment plant became operational in 2017 and the resulting biogas that’s captured from the decomposing sewage is being used to power the plant. Further, the residual sludge from the plant is also turned into charcoal and compost. The creators of the charcoal say that the feces-based burning material works better than wood and saves trees from being felled.

With much of their country below sea level, the Dutch have always had to innovate to keep themselves dry. From man-made lakes to parks that double as reservoirs for excess water, part of the solution, it seems, lies in living with the water, rather than resisting it with large, unsightly levees. The first line of defense for the city of Rotterdam is the Maeslantkering, a sea gate that is the size of two Eiffel Towers. Opened in 1997, the gate protects the Rotterdam’s port, with plans to add another two feet to its height underway. But as sea levels rise, the stakes are getting even higher. And for some entrepreneurs in the Netherlands, it spells opportunity. CNN travels to Rotterdam to explore some of these recent innovations, including the Delta Flume, a wave simulator that can help researchers understand what it takes to withstand storm surges and tides, and the Sand Motor, an experiment in coastal management.