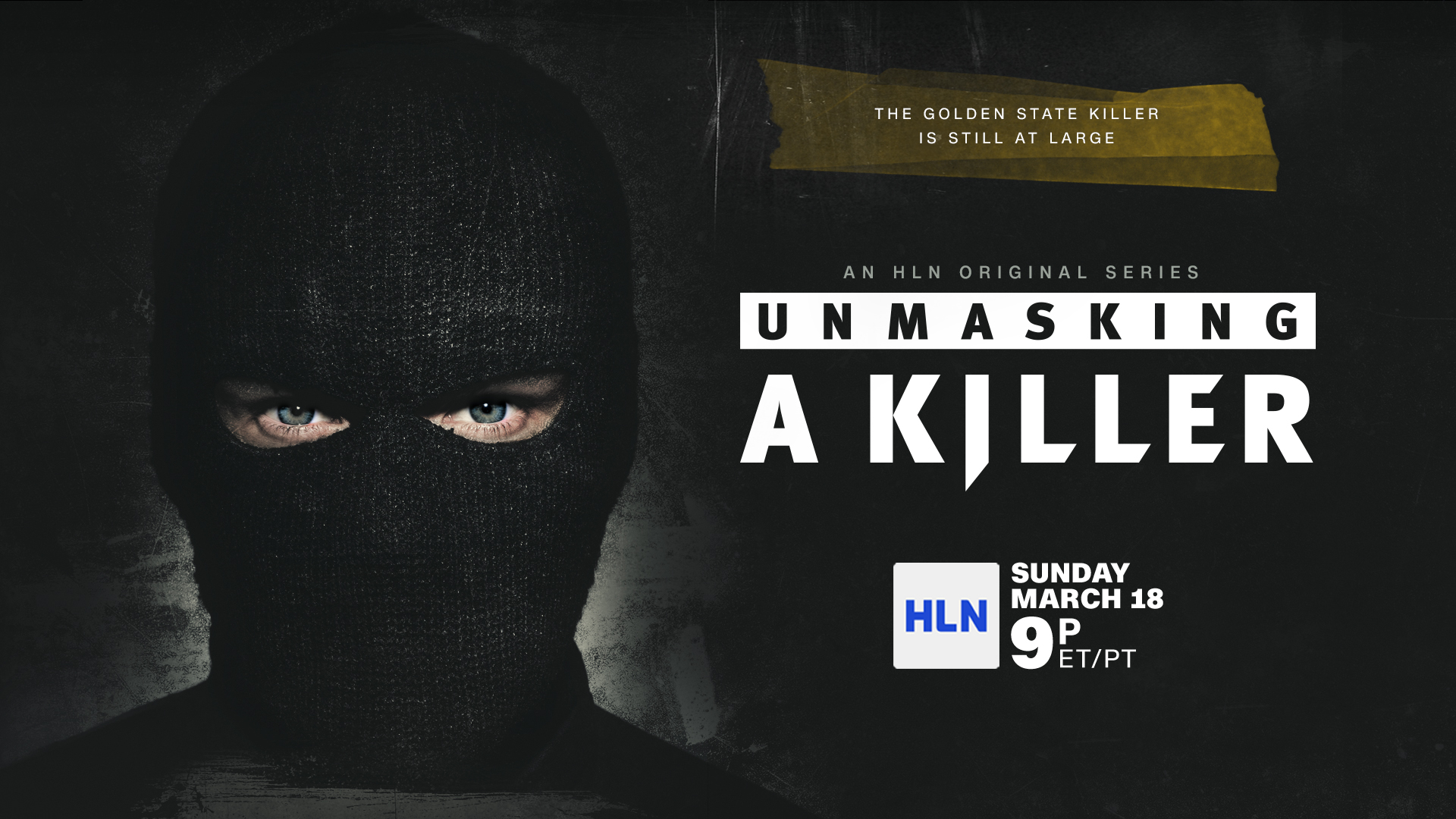 NEW YORK (February 13, 2018) – HLN intensifies the manhunt for one of the nation’s most prolific uncaught serial killers with a new true crime original series, Unmasking A Killer premiering Sunday, March 18 at 9pm ET/PT, only on HLN. The five-part docuseries profiles the terrifying real-life story of the Golden State Killer – a man responsible for a staggering 51 attacks and 12 murders in California. Investigators have searched for the sadistic criminal for forty years and with recent evidence suggesting he may still be alive, in 2016 the FBI Sacramento announced a national campaign and $50,000 reward to identify the perpetrator – making the investigation hotter than ever.

Through five one-hour episodes, Unmasking A Killer takes an in-depth look at the manhunt, patterns, escape methods and mind games of the Golden State Killer, raising a key to catching the criminal – potentially linking him to another series of unsolved crimes. Interviews with investigators, law enforcement and victims, who have never spoken out publicly, offer information to help solve the mystery of a man who has managed to fly successfully under the radar for decades.

HLN’s 2018 original series slate – dedicated to all things true crime – kicks off Sunday, March 18 with the 8pm ET/PT debut of Death Row Stories (season three) and 9pm ET/PT premiere of Unmasking A Killer. Both documentary series airing March 18 are commissioned productions and lead up to the premieres of the network’s internally developed fare under the direction of CNN Original Series. Returning for another season is the successful Inside with Chris Cuomo (season two; airdate: Sunday, June 17), Something’s Killing Me with BD Wong (season two; airdate: Sunday, July 22) and How It Really Happened with Hill Harper (season three; airdate: Sunday, October 7.)

From executive producers Joke Fincioen and Biagio Messina of Joke Productions, Unmasking A Killer is their first HLN production. “This series is unique in that it presents a call to action. The goal has always been for this series to shake loose new tips that will bring the Golden State Killer to justice. HLN offers us the best platform to do so,” said Joke Fincioen.

In addition to the linear premieres on HLN, the series will be available the day after each episode airs on HLN On Demand.

Following are descriptions of all five episodes of Unmasking A Killer:

Launching the Manhunt for The Golden State Killer (airdate: March 18)

This is the terrifying true story of one of the nation’s most prolific uncaught serial killers. Known first as the East Area Rapist, then the Original Night Stalker, and now the Golden State Killer, he’s responsible for a staggering 51 attacks and 12 murders … that we know of. For forty years investigators have been on the manhunt for this sadistic criminal and recent evidence suggests he may still be alive. With the FBI offering a $50,000 reward, the investigation is hotter than ever.

The Pattern of a Killer (airdate: March 25)

How does one get away with 51 attacks and 12 murders while assaulting inside people’s very own homes? Delve into the creepy, sadistic methods of one of the worst serial killers of all time – the Golden State Killer. Find out his signature calling card and discover how law enforcement was able to link his crimes long before DNA. Don’t be afraid to be terrified.

How the Killer Got Away (airdate: April 1)

The true story of how one serial killer wreaked havoc in California and changed our nation’s laws as we know them. Everything from rape crisis centers, to 911 emergency services and DNA collection laws were influenced by this one criminal – the Golden State Killer. Yet, for forty years this perverse predator has evaded capture … but perhaps not for long.  In 2016 law enforcement and the FBI launched a massive nationwide manhunt and are hot on the trail.

Inside the Killer’s Mind (airdate: April 8)

When dealing with a serial rapist and killer (51 attacks and 12 murders), it’s not only the crime scenes that are revealing, it’s also the serial behaviors that offer clues of the offender’s identity. Criminal psychologists show us the hidden meaning behind the Golden State Killer’s crimes and reveal what this tells us about him. Delve into the mind of a psychopathic killer as we analyze his motives, his personality, his upbringing, and most importantly, what he might be doing today. Could you know the Golden State Killer?

Is the Killer Still Out There? (airdate: April 15)

With 51 attacks and 12 murders, the Golden State Killer is one of the most prolific uncaught serial killers in U.S. History … but who is he? Join us as investigators analyze the evidence and explore the various theories as to who this ruthless barbarian could be. What job could have afforded him the time for these heinous crimes?  Where could he have lived?  And how, for forty years, has he managed to fly so successfully under the radar?  Now investigators believe the key to catching the Golden State Killer may lie in another series of unsolved crimes…