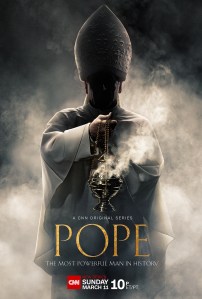 NEW YORK – Feb. 8, 2018 – The new CNN Original Series, American Dynasties: The Kennedys, will debut on Sunday, March 11, at 9 p.m. ET/PT, followed by the premiere of Pope: The Most Powerful Man in History at 10 p.m. ET/PT on CNN. Golden Globe and Emmy Award-winning actor Martin Sheen and international actor Liam Neeson serve as narrator on The Kennedys and Pope respectively.

“I was honored to be involved in such a definitive portrait of the Kennedy family through the ages,” said Sheen. “Having known many of them first-hand and been present at many of the events featured within the series, it was a joy to work with such great storytellers in bringing such eloquent and well-presented history to our audience.”

“Ever since a man, claiming to be the Son of God, was nailed to a wooden cross over 2000 years ago, the Catholic religion has had a huge and profound influence and impact on our society,” said Neeson. “As an amateur scholar myself, I was delighted to learn more about this by narrating a series that sheds a detailed light on how the Popes, past and present, and the Catholic Church came to be a prevailing force through fair means and foul, and along the way inspired some of the world’s greatest works of art.”

American Dynasties: The Kennedys, from Raw, is a six-part CNN Original Series that takes viewers behind the public image of America’s ‘First Family,’ revealing how personal relationships within the Kennedy dynasty helped shape national and global events from the Cuban Missile Crisis to the struggle for civil rights legislation. The docuseries spans the lives of Joseph and Rose Kennedy and their children, uncovering how and why this one family so significantly impacted 20th century America. The premiere episode, “The Power of Wealth,” explores patriarch Joseph “Joe” Kennedy’s desire to become President, and how his political ambition passes first to his son Joe Jr. and then to reluctant second son, John F. Kennedy. Martin Sheen, Louise Norman, Amy Entelis and Lizzie Fox serve as executive producers.

Pope: The Most Powerful Man in History, from Glass Entertainment Group and Rearrange TV, is a six-part CNN Original Series that goes inside the Vatican to reveal the true power held by popes throughout the ages. The docuseries explores how 12 apostles became 1.2 billion Catholics today, linking recent news events surrounding the Vatican with their unexpected origins. The premiere episode, “The Rise of the Pope,” examines the origins of the papacy and how Catholicism, against all odds, spread throughout Europe. Jon Hirsch, Nancy Glass, Randy Counsman, Amy Entelis and Lizzie Fox serve as executive producers.

The Kennedys and Pope will also stream live for subscribers on March 11 via CNNgo (at CNN.com/go and via CNNgo apps for Apple TV, Roku, Amazon Fire, Samsung Smart TV and Android TV) and on the CNN mobile apps for iOS and Android. Both series will also be available the day after the broadcast premiere on demand via cable/satellite systems, CNNgo platform and CNN mobile apps.

American Dynasties: The Kennedys and Pope: The Most Powerful Man in History will regularly air Sunday nights at 9 and 10 p.m. ET/PT respectively.