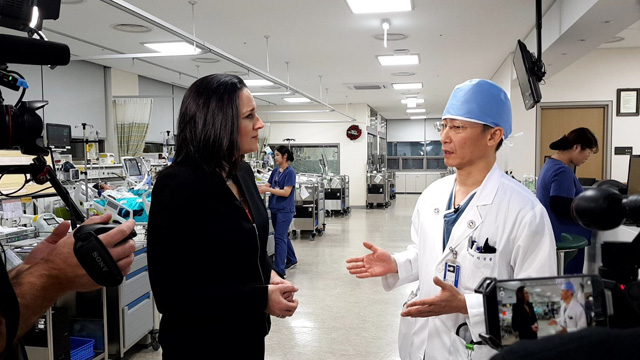 It was a desperate flight to freedom that almost cost him his life. A North Korean soldier escaped in the most dangerous and dramatic way possible, through the most heavily fortified border on earth, the DMZ, and the world was witness.

Shot five times by former comrades, one of whom crossed briefly into South Korea in his desperation to stop him, Oh Chong Song lay critically injured, life ebbing away, until South Korean soldiers risked their own lives to pull him to safety.

The U.S. medic who treated Oh onboard the Blackhawk racing to hospital said a prayer when he first saw him, assuming he’d be dead within 15 minutes. The South Korean doctor who operated on him for hours found parasites in his body, describing him as a broken jar as they struggled to replace the blood he was continuously losing.

But he has survived against all the odds, recovering slowly in hospital, protected by the doctor who saved his life.

In this special documentary, CNN International Correspondent Paula Hancocks takes viewers through the incredible chain of events that led to the most dramatic defection ever caught on camera, a miraculous and unlikely recovery thanks to South Korean and American co-operation, and a damning insight into the state of North Korea’s military.