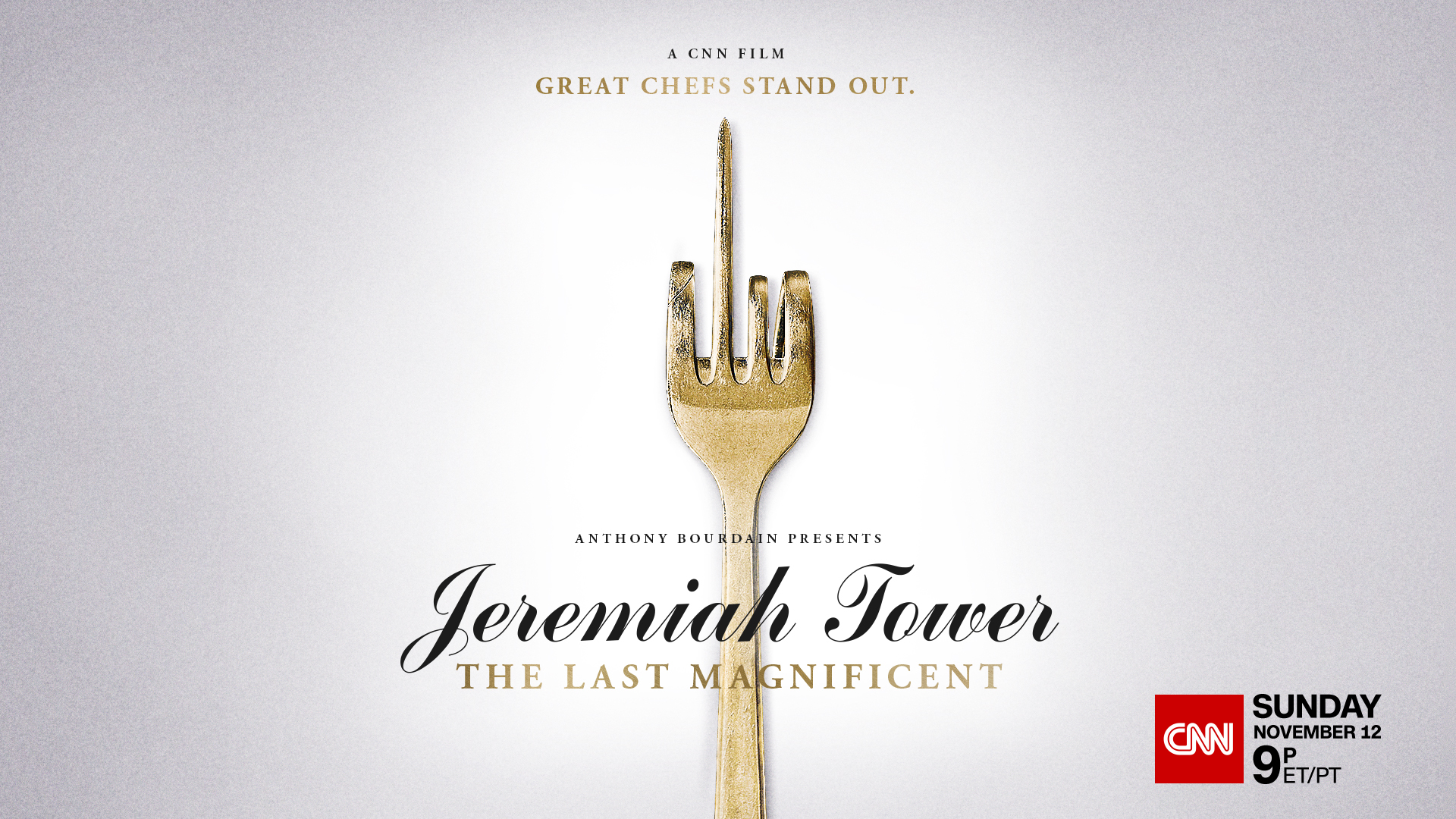 By the time he launched his own legendary restaurant, Stars, celebrated chef Jeremiah Tower had already created his revolutionary “Northern California Regional Menu” in October 1976 at Chez Panisse.  The menu’s distinctly New American style forever changed the American palate and influenced generations of chefs and restaurants that still follow in his footsteps.

CNN/U.S. is set to premiere the story of Tower’s remarkable life and legacy as a CNN Film on Sunday, Nov. 12 at 9:00pm Eastern & Pacific, with limited commercial interruption.  (The premiere will pre-empt Anthony Bourdain: Parts Unknown and This is Life with Lisa Ling.)  Jeremiah Tower: The Last Magnificent, directed by Lydia Tenaglia of ZPZ Production, Inc. (Anthony Bourdain: Parts Unknown), is set to encore Saturday, Nov. 18 at 9:00pm Eastern and 11:30pm Pacific on CNN/U.S..

“Jeremiah Tower is indeed one of the most provocative and essential contributors to the history of American gastronomy.  Almost overnight this Harvard-educated, global wandering, mercurial artist transformed American food, American restaurants, and American palates.  It was an honor to finally develop his life into a story for posterity,” said Tenaglia.

“When Tony and Lydia joined CNN five years and 10 seasons ago, they brought with them their idea to finally tell the missing history of Jeremiah Tower’s singular contributions to American cuisine,” said Amy Entelis, executive vice president for talent and content development for CNN Worldwide.  “Lydia’s exquisite film is the fruition of a passion project for every one of us who has become part of the team that produces Anthony Bourdain: Parts Unknown,” said Entelis.

Tenaglia crafts a multidimensional portrait through sumptuous reenactments of scenes from Tower’s peripatetic childhood, capturing the luxuries of living on cruise ships, extended visits to opulent resorts, and a casual flirtation with the hippie lifestyle in early adulthood.  Tenaglia’s deft direction weaves a complex, sensitive understanding of Tower through a seamless blend of media formats.  Tower family home movies and still photographs bring the chef’s diarized memories to life.

Archival footage and press accounts add to the illustrations of Tower’s tenures at Chez Panisse and Stars.  Contemporary interviews with Tower, his relatives and Harvard College classmates, as well as Mario Batali, Wolfgang Puck, Martha Stewart, Mark Franz, and Ruth Reichl slowly reveal the chef’s life, rise, ever-present discipline, and an inner drive for excellence that does not fully mask a discernible loneliness.

Then, suddenly, both the story and the narrative of the film change.  Tower’s empire was sold by him and then soon shuttered by the new owners.  Tower disappeared from the scene for nearly two decades, only to resurface in the most unlikely of places: as head chef for New York City’s fabled, but troubled Tavern on the Green restaurant.

Tower’s surprise landing at Tavern came during post-production of the film.  Tenaglia pieces together these sections of the film as a solution to a mystery.  The events that follow quicken the pace of Tenaglia’s subtle, perceptive storytelling, continuing Tower’s tale of self-discovery that will feel familiar to anyone who has ever imagined themselves to be an artist or a dreamer.

During the Nov. 12 premiere, JEREMIAH TOWER: The Last Magnificent will stream live for subscribers via CNNgo (at www.CNN.com/go and via CNNgo apps for AppleTV, Roku, Amazon Fire, Samsung Smart TV, and Android TV) and on the CNN mobile apps for iOS and Android.  The film will be available beginning Monday, Nov. 13, on demand via cable/satellite systems, CNNgo platforms, and CNN mobile apps.