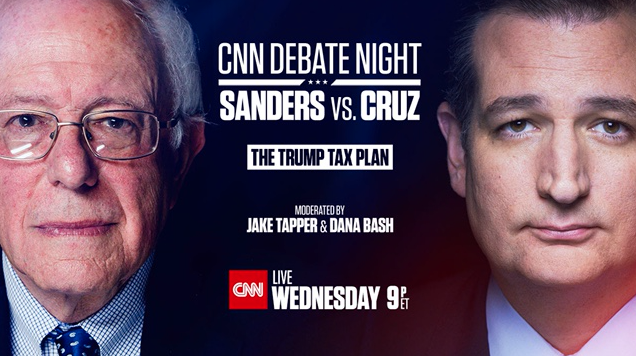 With attempts to repeal and replace Obamacare stalled, Republicans in Congress are now squarely focused on passing President Trump’s tax reform plan, and Sen. Cruz and Sen. Sanders will debate the best path forward on this critical issue.

Sanders and Cruz, runners-up for their respective presidential party nominations in 2016, will also field questions from voters around the country at the Town Hall Debate.

The Town Hall Debate will air on CNN, CNN en Español, CNN International, and will be carried by CNN’s SiriusXM Channel 116 and the Westwood One Radio Network.

In addition to the TV airings, the Town Hall Debate will also stream live for subscribers on Oct. 18 via CNNgo (at CNN.com/go and via CNNgo apps for Apple TV, Roku, Amazon Fire, Samsung Smart TV and Android TV) and on the CNN mobile apps for iOS and Android.  The Town Hall Debate will also be available on October 19 through on demand via cable/satellite systems, CNNgo platforms and CNN mobile apps.