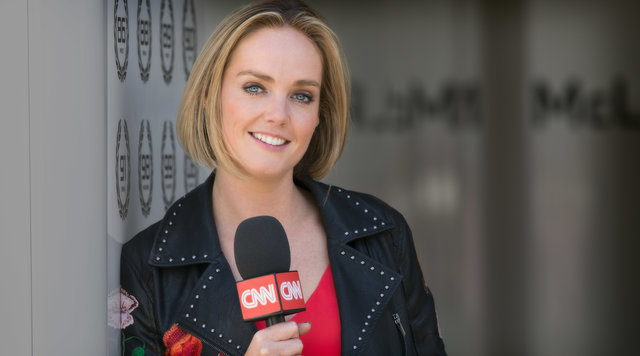 This month’s programming highlights on CNN International, including shows such as The Circuit, Living Golf and Inside the Middle East:

In October’s edition of ‘The Circuit’, the programme returns to Austin for the US Grand Prix.

In October’s episode of ‘Living Golf’, host Shane O’Donoghue heads to the Evian Championships in France to profile the women’s game.

At the only golf major held in Continental Europe, the programme meets one of the biggest stars on the LPGA Tour, Lexi Thompson. ‘Living Golf’ discovers how the American looks to improve against the tough competition and observes Thompson and her team as they maximize the global earning potential of one of the most marketable players in the game.

Finally, ‘Living Golf’ explores some of the issues facing the women’s game today. From initiatives in place to highlight the tour, to the recent controversial clothing rule that limits what players can and cannot wear, the programme studies where women’s golf is heading in 2018.

For many tourists, Morocco is best known for its historic cities, rugged landscape and sumptuous cuisine. But for surfers, it’s fast becoming known for its crashing waves and point breaks.

This month’s ‘Inside the Middle East’ discovers Morocco’s unexpected surf scene.  The programme heads to The World Surf League Qualifying Series in Casablanca to follow the young Moroccans making waves on the international surfing circuit. ‘Inside the Middle East’ also accompanies professional surfer Ramzi Boukhiam to Taghazout to explore where his love for surfing began and to discover the locals who are capitalising on increased tourism in the area.

The Volvo Ocean Race is regarded by many as the ultimate challenge in world team sailing and now the rules have changed, allowing crews to be made up of both men and women. This year, there will be more female sailors across the water than ever before in the competition’s 43-year history.

In this month’s episode of ‘MainSail’, double Olympic gold medallist Shirley Robertson meets some of the teams preparing for the race and discovers what the recent rule change will mean for women participating in sport in the future.

It has been said that the Prix de L’Arc de Triomphe is the only horse race that can truly lay claim to the much sought-after title – “The Best in The World”. It’s certainly Europe’s richest, yielding a prize fund of five million Euros, and this year there are two nations in particular, France and Japan, who have their sights set firmly on the crown.

Once again, this iconic event is being held in Chantilly, which proves the perfect temporary home with the Longchamps Racecourse currently undergoing a two-year and 130 billion Euro restructure.

On this month’s edition of ‘Winning Post’, host Aly Vance joins French racing expert Claude Charlet in Paris to see how these developments are progressing and to unravel nearly a century’s worth of history that surrounds the race affectionately known as “The Arc”.

Of the ninety-five winners since its inaugural outing in 1920, 66 of these have been French trained horses, but last year Ireland’s Aidan O’Brien dominated proceedings bringing home not only the win, but second and third places as well. The host nation desperately wants the trophy back on home soil and Vance catches up with renowned French trainer Alain De Royer-Dupre to find out how he plans to make this happen while simultaneously competing with the Japanese as they look for their, so far, elusive race victory.