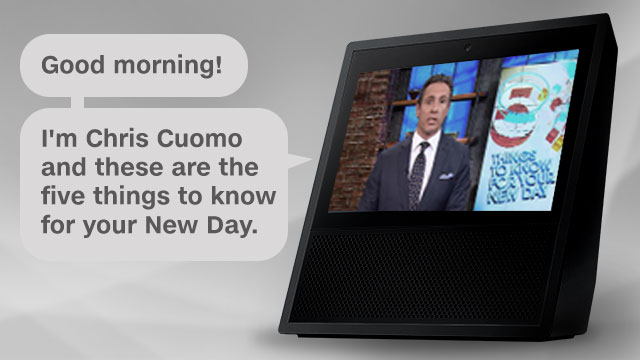 Building on the CNN Skill made available to Amazon Echo, Amazon Tap and Echo Dot owners in 2016, CNN has expanded its offerings on Amazon platforms to include daily ‘Flash Briefings’ and programming for the new Amazon Echo Show product.

On Amazon’s Echo Show, users can dive straight to the topic they want to hear, and now, watch with the “CNN skill.” With the product’s new video offerings, the skill features video clips from CNN television minutes after air. After enabling the CNN skill, Amazon Alexa users can find the top stories and breaking news topics covered on CNN in near real time. The news is curated throughout the day by CNN’s editorial staff who tracks developments in the top stories, updating Alexa and offering audiences the ability to watch back segments on the news that matters the most to them. To discover CNN on the platform, just say, “Alexa, Open CNN.”

CNN is also adding a new voice to audio news with CNN Politics Reporter and Editor-at-Large, Chris Cillizza. Cillizza will anchor a new audio politics briefing, delivered in five minutes or less, every weekday starting at 7pm ET. “The Point with Chris Cillizza” will be available everywhere you listen to podcasts and through Amazon Echo Flash Briefings and Google Home news briefings.