CNN #5 IN ALL OF CABLE IN NOVEMBER

Among ALL cable networks, CNN was the fifth most-watched network for the month of November among total viewers in Total Day and prime time.  CNN ranked a strong #2 in cable news in all dayparts among adults 25-54.

November was CNN’s highest rated month in Total Day among adults 25-54 in eight years (since November 2008) and second highest in total viewers since October 2008.

Among cable news networks, CNN once again thoroughly dominated MSNBC for the 29th straight month in Total Day and prime time demos. This is the longest winning streak over MSNBC in more than eight years. CNN also beat MSNBC in total viewers in Total Day, prime time and dayside. For the month, CNN beat MSNBC every hour of the day and in prime at 7, 8, 9 and 10 pm among adults 25-54.

And CNN’s morning program, New Day with Chris Cuomo and Alisyn Camerota, had its best month ever in both demos and viewers, and easily topped MSNBC’s Morning Joe among adults 25-54 (with its biggest advantage since June 2015). New Day posted CNN’s best numbers among total viewers in more than 11 years (since September 2005) and among demos in eight years (since November 2008).  For the month, New Day had CNN’s biggest share of the cable news morning audience among adults 25-54 in nearly eight years (including ties; since January 2009). 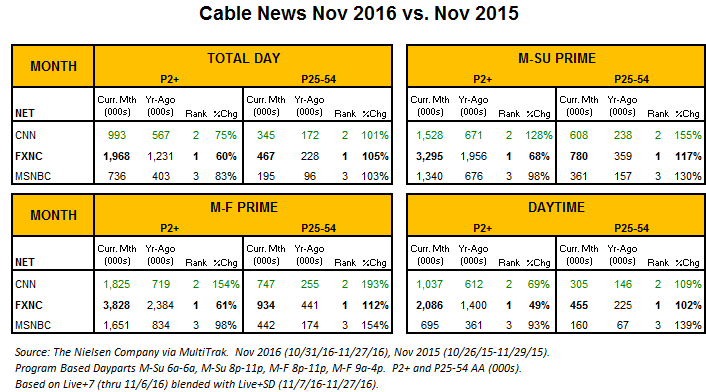