Of note, Erin Burnett Outfront was #1 last night, topping Fox News On the Record with Brit Hume for eight straight days.  This is the first time ever that Burnett has won eight straight days and the longest winning streak for CNN during the 7pm hour in more than 16 years. 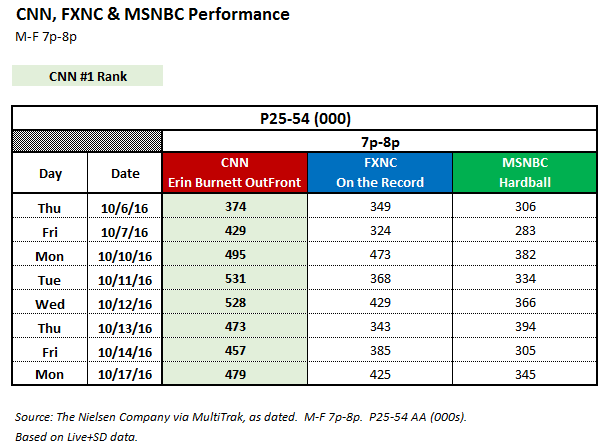 On Sunday (October 16), Reliable Sources with Brian Stelter was #1 among adults 25-54 for the third straight week (423k vs. 291k).  In addition, Reliable tied with Fox News Media Buzz for #1 for the first time ever in total viewers (1.356m vs. 1.356m).  Both represent the CNN program’s highest delivery ever.  MSNBC trailed in both total viewers and adults 25-54 on Sunday.

(Data based on Live+SD)