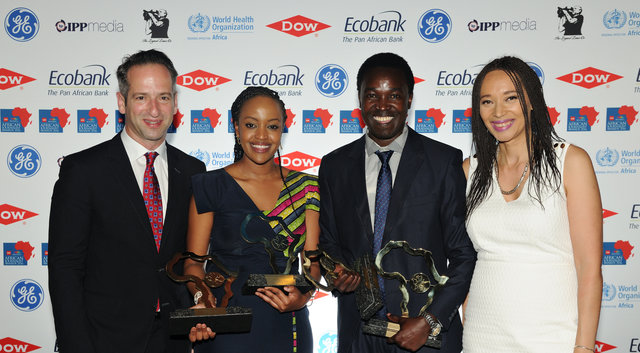 The pair shared the overall ‘CNN MultiChoice African Journalist of the Year’ Award for their combined work ‘Terror Crossing’ which was chosen from record number of 1,637 entries spanning 38 countries across the African continent.

Mwilu and Idi’s ‘Terror Crossing’ is an in-depth investigative documentary about security at the Kenya-Somali border in Mandera county. The story was aired by Kenya Television Network in its investigative programme “The Lead”.

Mwilu and Idi said: “We are overwhelmed by this accolade. It is a dream come true to win the CNN MultiChoice African Journalist Award for a story that we believe passionately in and one that we felt was important to tell.”

Mwilu and Idi, winners in the News Impact Award, were among 38 finalists from 15 countries who attended the Awards ceremony as the culmination of an all-expense paid four-day programme of workshops, media forums and networking in Johannesburg, South Africa.

Greg Beitchman, VP, Content Sales and Partnerships, CNN International, said: “Quality journalism has shone through once again at this year’s CNN MultiChoice African Journalist Awards. Congratulations to all of tonight’s finalists and winners, especially to overall winners Asha Ahmed Mwilu and Rashid Idi for their powerful reporting. We look forward to welcoming them at the CNN Journalism Fellowship in Atlanta.”

Yolisa Phahle, CEO of M-Net, congratulated the winners of this year’s awards: “Thank you to each of you for telling the stories of Africa and its people to the world. We’re proud to play a role in amplifying your voices and the voices of other journalists across the African continent.”

The competition is once again supported by a range of prestigious sponsors:  Dow, Ecobank, GE, IPP Media and the World Health Organisation.

All finalists receive both a cash prize and tablet, with the overall winner receiving a further cash prize and the opportunity to participate in the CNN Journalism Fellowship at CNN Headquarters in Atlanta.

The African Journalist Awards will be made available to broadcasters across Africa.

Viewers across the continent and across the world will be able to watch the Awards in the coming weeks and months.

Winners in the individual competition categories are:

Title: ‘Caught in the crossfire: how cattle and Chinese mining interests are killing off Namibia’s black rhinos’

Judges Citation: “A swashbuckling tale with a noble intention: to track and understand why the black rhino faces extinction… The team toiled for months and made significant breakthroughs to understand the plight of the beautiful animals. This transnational investigation found a Chinese connection and a close competition between the rhinos and roaming cattle.”

Judges Citation: “A story of hope. It brings to light the enduring spirit of a band whose members are visually impaired but vocally endowed. With their music, the orchestra members perform in ways that lighten humanity’s soul in the face of despair.”

Judges Citation: “The use of innovative, multimedia storytelling for a tale that is moving and inspiring is a winning combination. Journalists who tackle digital storytelling often dazzle with the technology and the story comes second – but in this case the story was powerful and enriching. This piece could easily be presented as best practice in ground breaking innovative storytelling.”

Judges Citation: “This story had depth and showed a full understanding of all the issues involved. It speaks to Africa on so many levels and thus the issues raised so well here resonate across the continent. It also shows how journalists have come of age in reporting complicated economic and financial issues.

Title: ‘Diepsloot: Where men think it’s their right to rape’

Judges Citation: “A comprehensive story, told in a very clear language. The level of bestiality of the predators is vividly, grimly captured and the agony of the victims even more so. It also shows how poverty dehumanises, robs people of their voices even in the face of assault and makes them live in an endless cycle of victimhood.”

“Mia Malan’s story is sad to read through, bringing out the worst of us human beings wondering how we can allow crime to happen to the most fragile in society as we look to the other side… The narrative should have an impact in not only law enforcement but local leadership of any area across the continent to look around them for crimes that go unreported…”

Judges Citation: “Faten Hayed has gathered outstanding testimonies of the mechanics of indoctrination in jail. ‘Algeria, my land of Jihad’ is an exceptional tale of the political spiral and the hellish human cycle that turns European citizens into jihad soldiers… It is a good piece to read, agreeable and with deep understanding of the new face of terror affecting the North of Africa and the world in the last years.”

Title: ‘40 Years of Mozambique – The Dead Port that Rose Again’

Judges Citation: “This is a beautifully written story about the main port in Mozambique that had all but died – being brought back to life 40 years later. The writer weaves into the story the lines and events that took place in Mozambique over that period to bring us to where we are today, a vibrant port. It is indeed a great story straight out of Africa.”

Title: ‘The Killing of Emmanuel Sithole’

Judges Citation: “The three harrowing pictures of Mr Sithole show how the situation quickly escalated to a murder are not only visually moving, but impacted what was to come next in South Africa. The photographer captured vital moments in this tragic situation… stories of xenophobia in South Africa were in the most part downplayed without material action in affected areas – until these pictures were published.”

Judges Citation: “Veronica Narkwor Kwabla is that journalist an editor wants to work with. She noticed something. Although Accra, Ghana was at the centre of the treatment of the Ebola outbreak, most stories were originating in Western capitals. So, she grabbed a crew and got herself to both Sierra Leone and Liberia to see whether we were indeed at the end of the Ebola outbreak. A fascinating story inside the treatment centres, survivor stories and insight into heroism. It’s told in a four-part series which left me feeling hopeful and energised, not hopeless and despairing.”

Judges Citation: “This well executed piece deserved to win because, in it, we see a combination of impartiality, determination, and it not only brings issues to the surface, the report gives suggestions of ways to tackle this issue… One of the elements that made the piece a winner, is also the team work that went into this great television piece.”

Judges Citation: “This story takes us on a journey into the intricate business in which superstitious beliefs pose a serious threat to people with Albinism in the Nampula province of northern Mozambique. Apart from people with Albinism being hunted down for their body parts which are believed to be magical, they also suffer discrimination at various levels of society, including in education… In a three-part series, the report covers all facets of the problem, including the need for effective public policies for the protection of people with Albinism.

Judges Citation: “This story shows originality. Media in Africa do not often address the situation of older people abandoned by their family members. It is a balanced, comprehensive and resourcefulness story in the context of Mozambique post-war society. The journalist communicated this story in a way that made the topic accessible and relevant to his audience. ‘Forgotten libraries’ highlights challenges to the future of humanity in Africa.”

Judges Citation: “One of the best long stories out of our continent has been sustained democratic practice – regular elections, healthy civil society and the growing strength of institutions. Sometimes leaders want to stay longer than democracy would give them.  That is what happened in Burundi and independent journalists have been caught in the crossfire.  Leading among them is Bob Rugurika, the much loved radio man who has sadly been forced into exile. The independent judges panel of the CNN MultiChoice African Journalist Awards seeks to shine a spotlight on Burundi this year where brave journalists stand at the forefront to protect the hard won gains of democracy in this central African nation.  The award goes to Bob Rugurika for his brave work.”

Title: ‘Follow the Money: Who extracts the value of Nigerian footballers?’

Judges Citation: “This is a very powerful and compelling story about the plight of aspiring footballers in Nigeria, who become victims of unscrupulous agents who exploit them with the promises of brilliant future careers in Europe, but then abandon them, left to fend for themselves in foreign lands. It is a story written in a very clear format, also demonstrating the reporter’s effort to cover all facets of the issue, including contacting the federations of the countries where the young footballers were supposed to be taken to. The illustrations are equally good and complement the written story in a very significant way.”

Title: ‘Prophets of profit in the business of belief’

Judges Citation: “As a new category that seeks to bring out the best of young upcoming writers, the Maggie Eales Young Journalist Award entries attracted young energetic writers, determined to display their best to the continent… The writer uses photos to tell a compelling story of many caught up in the ‘business of religion’, eager to live better lives as promised by the various ‘prophets’. It’s a captivating story, told in a way that is easy to follow and you want to read the story from beginning to end… Maggie championed young journalists and she would have been very proud of this crop of entries.”

The work of 15 other journalists was also recognised by the judges, with each receiving a commendation:

The CNN MultiChoice African Journalist 2016 competition is open to African professional journalists, whether directly employed or freelancers, working in the continent of Africa who have produced a story which has been made available as a printed publication or broadcast through an electronic medium (television; radio or digital platform) whose primary audience are based in Africa.

Entries were published or broadcast in 2015 for the following awards:

At MultiChoice South Africa Corporate Social Investment is not about simply giving money to worthwhile causes – it is about making a real and lasting difference in the lives of the people we touch. We are committed to contribute to the growth and development of South Africa.

These programmes leverage the resources of the Group and help us to play a role in South Africa for which we are uniquely positioned as a broadcaster. In addition, create a talent pipeline for scarce and critical skills so we can make a real difference to South Africa’s unemployment.

The African School Building programme is the company’s flagship corporate responsibility project which has seen staff raise several hundred thousand dollars and give their time to build schools and facilities in Mali, Rwanda, Malawi, Ethiopia, Tanzania, Mozambique and Zambia.  The project has won major awards and was featured on CNN’s ‘BackStory’ programme and another group of volunteers will be fundraising and building with ActionAid in 2017. The company has donated funds and millions of dollars’ worth of airtime to its charity partners, as well as funding the trips and giving the time for the volunteers who help build the schools. In recent years the company and its staff have also partnered with Plan International to build schools, Habitat for Humanity to provide houses in South Africa and with UNICEF to provide schooling, food, drugs and transport for children orphaned by HIV/AIDS in Kenya. Using their paid volunteer time, staff have created advertisements for other African charities including the ‘Mozzy’ campaign for Malaria No More which generated 19.5 million impressions from CNN.com alone.

CNN Multichoice Journalist of the Year Awards on Facebook

PHOTOS FOR ALL WINNERS AVAILABLE ON REQUEST