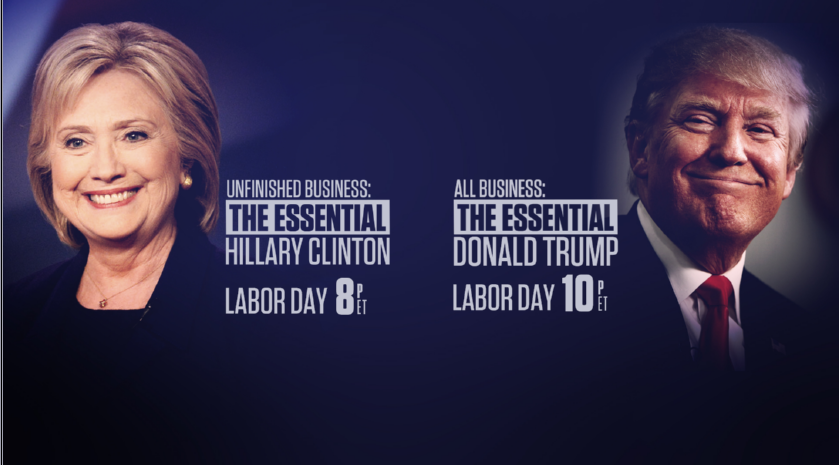 The two-hour documentaries, Unfinished Business: The Essential Hillary Clinton, hosted by CNN Justice Correspondent Pamela Brown, and All Business: The Essential Donald Trump, hosted by CNN Chief Political Analyst Gloria Borger, go beyond the campaign trail and political rhetoric to get to the heart and soul of the two people vying for the presidency of the United States.

The CNN Special Reports take viewers deep into the inner circles, decisions, controversies and milestones of two of the most famous and controversial candidates in modern political history.

CNN’s Brown and Borger sat down with more than 60 family members, childhood and lifelong friends, former colleagues, and analysts to weave together their years before rising to international notoriety with their many decades in the public spotlight.

From student superstar, to controversial first lady, to historic candidate for president, Hillary Clinton has become the most written about woman in American politics. Unfinished Business: The Essential Hillary Clinton takes a look at the highs, the lows, and the inside stories behind the moments that have defined the democratic presidential nominee. CNN’s Brown sits down with both Hillary Clinton and daughter Chelsea Clinton, to look at how she became a political force in her own right — as Senator, and later, Secretary of State.

In All Business: The Essential Donald Trump, CNN reveals the moments that made the man – the challenges he’s overcome, the critics he’s silenced, the controversy that follows wherever he goes, and the confidence engendered in his every word. The documentary, featuring interviews with Donald Trump, Jr., Ivanka Trump, and Eric Trump, follows his journey from his childhood in Queens, to his early years in Manhattan and Atlantic City, to primetime fame and now the Republican nominee for president.

The Special Reports will also be available On Demand the day after the linear premiere on cable VOD and on CNNgo via iPad, Roku, AppleTV and desktop at www.cnn.com/go

CNN Special Reports (CSR) investigate, explore and illuminate the most pressing issues and events of our day, producing some of the most compelling and informative television. Specials include “Targeting Terror,” created in the wake of the Paris attacks; “Downward Spiral,” an investigation into murder allegations against NFL player Aaron Hernandez; “The People’s Pope,” which tracks the evolution of Jorge Bergoglio from the slums of Argentina to the Vatican; and the “Weed” series, three ground-breaking documentaries exploring the use and benefits of medical marijuana. CSR also provides articles, galleries and clips to CNN.com, generating millions of views. For updates, follow @CNNSpecReport on Twitter.