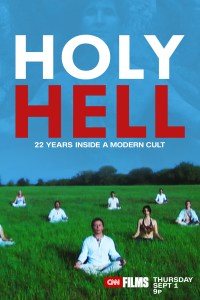 CNN Films will premiere HOLY HELL on Thursday, Sept. 1 at 9:00pm and 11:00pm Eastern, the network announced today.  The film reveals the compelling story of life inside Buddhafield, a mysterious spiritual community that originated in the 1980s in West Hollywood.  The film is directed by Will Allen, himself a member and the unofficial documentarian of the sect for 22 years.

The close-knit Buddhafield aspired to an artistic utopian communal life, led by an enigmatic, charismatic guru, Michel.  Buddhafield members pursued his vision for fulfillment while living together, exploring nature, and performing together.  Gradually, several Buddhafield members came to grow disenchanted with Michel, including Allen, and allege emotional manipulation and even physical abuse by Michel.

Throughout his years among Buddhafield, Allen filmed life from within the group.  After what Allen describes as “many painful years” living among Buddhafield, he grew disillusioned, ultimately leaving and taking many of his films with him.

Allen’s resulting film is as revealing as it is terrifying.  HOLY HELL offers a mesmerizing look into how powerfully attractive a spiritual sect like Buddhafield can be, and how alluring a powerful personality like Michel can be in the universal search for meaning and purpose that all humans seek.

In addition to the premiere broadcast, HOLY HELL will encore Saturday, Sept. 3 at 8:00pm and 10:00pm Eastern.  For additional content about HOLY HELL, please visit: www.CNN.com/HolyHell.

HOLY HELL will also stream via CNNgo (via desktop www.CNN.com/go, and the CNNgo apps for iPad, Apple TV, Roku, and Amazon Fire) and will be available after the premiere on demand via cable and satellite systems and CNNgo for subscribers.

HOLY HELL had its world premiere at the 2016 Sundance Film Festival.  Will Allen is also a producer of the film along with Tracey Harnish and Alexandra Johnes.  The executive producers for the film are Michael C. Donaldson, Julian Goldstein, Jared Leto, and Cheryl Wheeler Sanders.