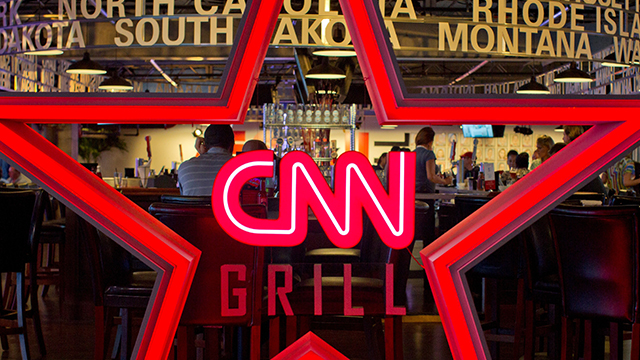 It’s back and better than ever!  For four nights only the CNN Grill will open its doors in Cleveland, OH and Philadelphia, PA for the Republican and Democratic National Conventions.  In cooperation with an all-star lineup of vendors and partners, CNN will offer select convention-goers access to the most tricked out hospitality venues and live broadcast studios in each city.  The ultimate convention destination, the CNN Grill is where lawmakers, celebrities, reporters and politicos meet to make news and make merry.

This year, the CNN Grill has chosen STARR Catering Group to create custom menus for both cities, giving guests a truly unique and unparalleled experience. The CNN Grill will also give visitors a special taste of Cleveland and Philadelphia and shine a spotlight on several top-notch local businesses by incorporating their products into the Grill’s menu.

The CNN Grill at the Republican National Convention

Situated just steps from the Quicken Loans Arena in Cleveland, the CNN Grill will be located at the site of Harry Buffalo.  With the help of experiential marketing & PR agency CIVIC, CNN completely reimagined the restaurant – a two-story warehouse space located on East 4th Street. The Grill will serve as home base for the network with a newsroom and live broadcasts daily, a fully operational restaurant and multiple bars. The Grill will play host to a variety of special events throughout the day and will open to invited guests nightly at 5pm from Monday, July 18th – Thursday, July 21st.

To highlight local businesses on the Grill’s menu in Cleveland, STARR has tapped a variety of hometown favorites:

The CNN Grill at the Democratic National Convention

A prime location in Philadelphia, the CNN Grill will take up residence at Victory Beer Hall at XFINITY Live!.  CNN worked with CIVIC to transform the sprawling space into an unrivaled convention venue for food, fun, festivities, and of course – a broadcast studio for live daily programming. The site boasts soaring ceilings, several bars and a 2,000 square-foot patio complete with a fire pit and a unique panoramic view of the Philadelphia skyline. A variety of private events will be hosted throughout the day and the Grill will open to invited guests daily at 5pm from Monday July 25th — Thursday July 28th.

To introduce visitors to some local flavor, STARR Catering Group has identified several businesses whose products will be featured on the CNN Grill menu:

The CNN Grill first opened its doors across from Madison Square Garden in New York City as the ‘CNN Diner’ in 2004 and has since welcomed convention goers in St. Paul, MN and Denver, CO in 2008 and Charlotte, NC and Tampa, FL in 2012. CNN has also taken the Grill to the SXSW festival in Austin, TX.