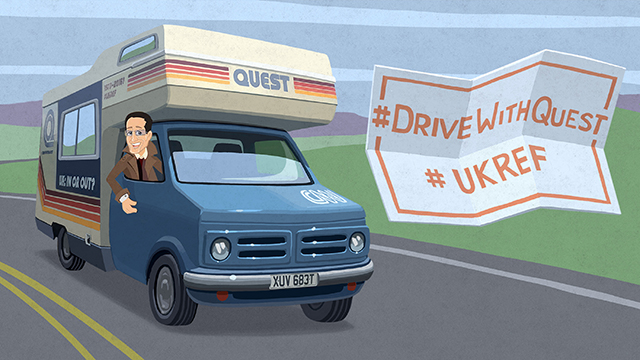 London, 2 June 2016: As the UK prepares to vote on whether to remain in the European Union, CNN will offer a mix of special ‘Brexit’ programming to audiences around the world, across TV and digital platforms.

Leading up to the poll on 23 June, CNN’s most experienced journalists will be getting to grips with the issues facing UK voters, and the implications of their decision for Europe and the world.  The network will take to the UK’s roads, host an interactive debate show, and provide the latest news and reaction as the results come in.

Gill Penlington, Director of News & Event Programming, EMEA at CNN International, said: “There is so much information, misinformation, conjecture and opinion around this vitally important story.  We’ll be talking to leading lights from all angles of the debate, debunking some of the myths, and getting into the minds of the voters whose decision will have implications across the world.”

Following the story will be CNN journalists including anchors Hala Gorani, Max Foster, and Nina dos Santos, as well as Diplomatic Editor, Nic Robertson.  They will be joined by CNNMoney Editor at Large, Richard Quest, and Chief International Correspondent, Christiane Amanpour.

Full coverage of the referendum can be found at CNN.com/Brexit – including explainers, opinion, and the very latest news.

From Monday 13 June, Richard Quest will be taking to the UK’s roads in a 1970s campervan for a week, to get the mood on the ground.  Visiting iconic locations he will talk to voters, as well as leading voices from business, politics, academia and culture.  In addition to updates through the day on CNN International and extensive coverage on CNNMoney, Quest Means Business will also be anchored live from the campervan throughout the week at 9pm GMT/10pm CET.

On Thursday 16 June at 7pm BST/8pm CET, Christiane Amanpour will host an interactive ‘Brexit reality check’.  Recorded at the McLaren Thought Leadership Centre, UK Decides: In or Out will feature a panel of high profile guests from both sides of the debate. Max Foster will be marshalling the studio audience, who will use high tech, interactive voting technology to have their say in real time on the key issues.

On Thursday 23 June, the day of the referendum itself, CNN will present coverage throughout the day.  Then, from the moment the polls close, at 10pm GMT/11pm CET, there will be rolling coverage of the results.  Anchored live from London, with correspondents stationed in key locations in the UK and Europe, CNN will bring up-to-the-minute developments through the night as the votes are counted.  The result will then be dissected the next day, with the ramifications for the UK, Europe and the world put under the microscope.