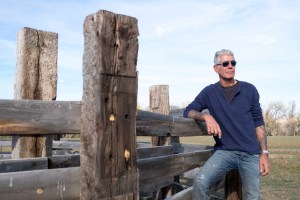 (April 6, 2016) Season seven of the top-rated Emmy and Peabody award-winning CNN Original Series Anthony Bourdain Parts Unknown begins on Sunday, April 24 at 9pm ET/PT with the host’s tour of the Manila, The Philippines.

Airing just prior to the season premiere will be the latest edition of “Prime Cuts” at 8pm ET/PT that reviews such season six delights as, Borneo’s noodle breakfast and an enlightening meal with a journalist in Cuba, plus a taste of things to come in the next eight episodes.

Following are the locations and episode descriptions for season seven of Anthony Bourdain Parts Unknown:

Manila, Philippines (airdate: April 24) In the season seven premiere, Bourdain explores the Philippines during Christmas season and travels through the festive streets of Manila to taste the fast food wonder Jollibee, try the sweet, milky drink, Halo-Halo, and indulge in the classic dish, Sizzling Pork Sisig. The trip continues with the host accompanied by cover band “Keystone,” as they dine on Adobo, a simmered pork-chicken dish. The tour concludes with a family meal of Kare-Kare and the opening of the Balikbayan box.

Chicago (airdate: May 1) Chicago’s iconic Old Town Ale House and its colorful patrons are the gateway to Bourdain’s tour of the “City by the Lake,” which includes the host dining on breaded steak sandwiches at Ricobene’s with music producer Steve Albini, sampling Mapo Doufu at Chinatown’s Sze Chuan with Chef Stephanie Izard, and a home cooked meal with Chicago-raised rapper Lupe Fiasco and his mom, plus a tour of comedy mecca Second City with mainstage performer Paul Jurewicz.

The Greek Islands (airdate: May 8) Life on the Greek islands, home to a fiercely independent and proud population, is relatively secluded, steeped in tradition, and revolves around local food, wine, close friends and family. On the island of Naxos, Bourdain heads offshore to dive to a sunken ship wreck, drink raki with the local residents, and sample cuisine fresh from the fishing boat, including octopus salad, salatouri (skate), and rofos (grouper) with olive oil and lemon. While exploring the island, he meets with politically outspoken musical group, The Stray Bitches, and travels to the mountainous village of Apeiranthos where he attends a traditional celebration in the town square.

Montana  (airdate: May 15) Bourdain traverses big sky country and embraces Montana’s distinctive history and culture with a visit to Crow reservation to watch horse relay racing and feast on buffalo steak, pheasant hunting with podcast host Joe Rogan, dinner at Butte institution Lydia’s supper club (est 1946), and by going underground in the Orphan Boy Mine with state senator Jim Keane. A conversation with his friend, famed writer Jim Harrison, who passed away in March 2016, encapsulates the Montana experience.

Senegal (airdate: May 29) Bourdain explores the distinct culture of the West African nation Senegal, which despite its deep-rooted religious beliefs, is known for its nightlife, global musical influence, vibrant fashion scene, rich food culture and history of tolerance. Featured guides on this journey include Chef Pierre Thiam, NPR Africa correspondent Ofeibea Quist Arcton, and famed musician Youssou N’Dour, for conversation and a taste of maffe, a much loved rich beef stew, popular throughout West Africa.

Cologne, Germany  (airdate: June 5) The 40-day Cologne Carnival celebration sets the tone for Bourdain’s visit to this city that boasts many delicacies (kolsch, mett, blood sausage with himmel und erde, schnitzel), and maintains a peaceful atmosphere and sense of tolerance, despite the recent New Year’s Eve assaults linked to incoming refugees, which the host discusses with the locals.

Buenos Aires (airdate: June 12) For the season finale, Bourdain’s trip to meat-centric Buenos Aires during the hot summer month of February, features a meal with chef Francis Mallmann at one of his favorite local spots, Don Carlito’s, and an after-hours soccer match accompanied by Soledad Nardelli and the kitchen staff of Chila.

Each episode of Anthony Bourdain Parts Unknown will be available On Demand the day after the linear premiere on cable VOD and on CNNgo via iPad, Roku, AppleTV and desktop at www.cnn.com/go.