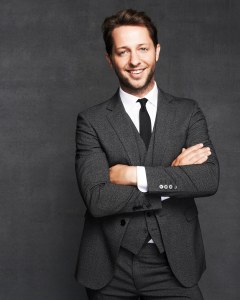 CNN Style is coming to TV screens – 15 years after the iconic Elsa Klensch was last on the network, and on the back of style being reimagined for the digital age in 2015 with the launch of CNN.com/style.

With exclusive access to the biggest names and events, Blasberg will bring the worlds of art, luxury, fashion, autos, architecture and design to life for CNN’s global audience. He will build on the unique legacy of style on CNN – epitomised by the iconic Elsa Klensch who defined style for viewers around the world for over 20 years.

In 2016, CNN Style will be at the definitive events in the style calendar – biennales, expos, fashion weeks, design festivals. The launch episode focuses on the contemporary art world, set against the backdrop of Asia’s pre-eminent international art fair, Hong Kong Art Basel.

In her first major international TV interview in almost two years, the undisputed queen of the art world HER EXCELLENCY SHEIKHA AL MAYASSA BINT HAMAD BIN KHALIFA AL-THANI, sister of the Emir of Qatar and Chairman of the Qatar Museums, speaks to CNN about her role in preserving and growing the family’s extraordinary collection of art. In recent years she has made bold moves to bring some of the world’s greatest contemporary artists to Qatar – Damien Hirst and Takashi Murakami among them. Now, she’s turning the spotlight to China – enlisting the country’s most explosive artist CAI GUO QIANG to curate an exhibition of 15 contemporary Chinese artists in the Qatar Museum Gallery al Riwaq.

From Doha to Beijing, CNN Style travels to discover the art scene in China – with painter LI SONGSONG, who emerges from the same group of trailblazers as Ai Weiwei.

The best of British art is on show in Hong Kong, with TRACEY EMIN (the Young British Artist who changed the face of contemporary art in the 90’s with her Turner Prize entry “My Bed”) opening her first exhibition in Greater China. CONRAD SHAWCROSS, British sculptor whose moving sculptures caught Saatchi’s eye in 2003, is showcasing his dancing robot “Ada Project” in an unexpected location. Pop star RITA ORA is passing through Hong Kong to collect the Chinese Music Award for best international artist – she takes a moment with Derek to discuss how Chinese culture influences her creativity and style. Over a bowl of the best local noodles, CNN Style speaks exclusively to F1 superstar LEWIS HAMILTON about his new found passion away from the track: contemporary art. CNN Style accompanies him around the fair as he looks to grow his collection.

In the coming months, CNN Style will be at New York’s Met Ball, Milan Design Week, the Venice Architecture Biennale and more.

CNN Style isn’t just a monthly TV show – its multi-media content will feature right across the CNN International network, with new segments and reports all under the CNN Style banner. The first of these will be The Invitation – a regular feature that will air in prime time shows CNN Today and The World Right Now with Hala Gorani. Starting on 20 April, CNN invites viewers to experience the personal workspace and headspace of the world’s most celebrated creatives, the homes they design, the runways they furnish, the exhibition spaces they fill.

The return to TV follows the successful launch of CNN Style on digital in July 2015. Since then, cnn.com/style has become a global destination that has collaborated with guest editors from Olivier Rousteing to Daniel Libeskind and Glenn Lowry, commissioned stylised content for CNN digital platforms and direct to social media, attracted a range of luxury advertisers and built a large audience with an average of 5.5 million unique users every month.

Ellana Lee, Senior Vice President, CNN International, said; “We are taking inspiration from CNN’s rich past in style and reverse engineering the DNA from our hugely successful digital product to bring CNN Style to TV viewers worldwide. With Derek Blasberg at the helm, our mission is to interview the most interesting people at the definitive events. This will be a surprising and elegant journey through the concepts and worlds of style.”

Derek Blasberg said: “Style is so much more than getting dressed, or looking at pictures on a wall. Artistic expression comes in a variety of mediums and is an international, multi-billion dollar a year industry. What I’m excited about with CNN Style is peeling back the layers of the worlds of art, architecture and design, and taking hard looks at the fashion, luxury and automotive industries to show how they affect the world at large. My career has introduced me to creative people from all walks of life, and it’ll be a pleasure to bring them to viewers around the world.”

CNN Style is on digital at CNN.com/style, with episode one of the new monthly show airing on CNN International at:

Derek Blasberg is a writer, editor and New York Times best-selling author. He is Vanity Fair’s ‘Our Man on the Street’ and a senior staff member at the Gagosian gallery.

Derek was born in St. Louis, Missouri, and moved to New York City in 2000 to attend New York University. He graduated in 2004 with two degrees, Dramatic Literature and Journalism, and began his career as an assistant at Vogue. In his career, Blasberg has contributed to editions of Vogue, Vanity Fair, and Harper’s Bazaar around the world, as well as W, Glamour, WSJ. Magazine, The New York Times, and The Sunday Times.

In April of 2010, Blasberg’s first book, Classy: Exceptional Advice for the Extremely Modern Lady, a collection of humorous essays about modern etiquette, was released by Penguin Publishing. The book was on the New York Times best sellers list for several weeks; it has since been translated into several languages and published in countries in Asia, South America and Europe. In 2012, a sequel, Very Classy: Even More Exceptional Advice for the Extremely Modern Lady was released. In 2015, he published Harper’s Bazaar: Models, a photographic survey of the most influential faces that have appeared in the publication. As a fashion editor, Blasberg has collaborated with some of the industry’s most iconic image-makers, including Karl Lagerfeld, David Bailey, Terry Richardson and Marilyn Minter.

Derek has hosted several web series for Vanity Fair, including the popular Conversations in the Backseat that has featured Reese Witherspoon, Selena Gomez, Kate Hudson, Naomi Campbell, Rosie Huntington-Whiteley and Gigi Hadid. His TV work includes co-hosting Fashionably Late on Lifetime TV; appearing alongside Alexa Chung on 24 Hour Catwalk and appearing as a culture expert on The Today Show.

Blasberg lives in New York City with his dog, a dachshund named Monster.

CNN’s portfolio of news and information services is available in seven different languages across all major TV, digital and mobile platforms reaching more than 400 million households around the globe. CNN International is the number one international TV news channel according to all major media surveys across Europe, the Middle East and Africa, the Asia Pacific region and Latin America and recently expanded its U.S. presence with its launch on CNNgo. CNN Digital is a leading network for online news, mobile news and social media. Over the years CNN has won multiple prestigious awards around the world for its journalism. CNN has 42 editorial offices and more than 1,100 affiliates worldwide through CNN Newsource. CNN International is part of Turner, a Time Warner company.