CNN ‘MADE IN JAPAN’ EXPLORES JAPAN’S INNOVATION AND CREATION 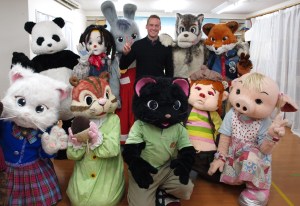 Will Ripley joins a mascot class in Tama, Japan

“Japan Inc”, is a title so distinctively representative of the character of the country. Through a special 30-minute program, ‘Made In Japan’, CNN International’s Tokyo correspondent Will Ripley takes a look at how Japan is innovating and creating for tomorrow, and the evolving reality of what it means to be Made In Japan.

Highlights of the 30-minute special include:

CNN takes a look at how Japan is testing the boundaries of the relationship between humans and technology. CNN’s Will Ripley travels to Hiroshi Ishiguro Laboratories in Kyoto to learn about Dr. Ishiguro’s experiments with humanoid technology. He also visits the Robot Restaurant in Tokyo’s Shinjuku, MJI Robotics, and takes a tour of the world’s first hotel run mostly by robots in Nagasaki.

CNN also looks at the global soft power and the business of characters that are ‘Made In Japan’. Starting locally, Will Ripley visits a mascot factory and joins a mascot class to discover the influence and prevalence of mascots in the country. Then he takes a look at Polygon Pictures Inc. that creates animations for Japan and internationally for Disney, Netflix, and Lucasfilms. CNN learns about the creative process behind these characters and why anime represents a huge opportunity for growth in Japan.

The ‘Made In Japan’ label is known for carrying quality craftsmanship. But it is also a reflection of Japanese society and culture. So where does the label stand today? In a conversation with fashion veteran Tiffany Godoy, CNN looks at the evolution of Japanese fashion and how designers are bringing smart design to the runway. CNN also goes into the studio with designer Kunihik Morinaga and explores how he is mixing fashion and technology through the brand Anrealage. It’s an inside look at how the industry is being redefined and carving a new place on the global fashion stage.

CNN’s portfolio of news and information services is available in seven different languages across all major TV, digital and mobile platforms reaching more than 400 million households around the globe, including over 69 million across the Asia Pacific region. CNN International is the number one international TV news channel according to all major media surveys across Europe, the Middle East and Africa, the Asia Pacific region and Latin America and recently expanded its U.S. presence with its launch on CNNgo. CNN Digital is a leading network for online news, mobile news and social media. Over the years CNN has won multiple prestigious awards around the world for its journalism. CNN has 42 editorial offices and more than 1,100 affiliates worldwide through CNN Newsource. CNN International is part of Turner, a Time Warner company.