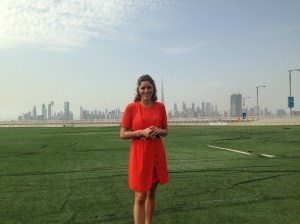 In March, ‘Winning Post’ traces the story of thoroughbred racing in Newmarket, to the heart of the action at the Dubai World Cup. The programme reveals why the Middle East and Dubai in particular have a love affair with racing.

Host Aly Vance (pictured) begins her journey at Cheveley Park Stud Farm where some of the racing world’s greatest, including Dubai World Cup winner African Story, have been bred.

The head groom at Cheveley reveals what is involved in looking after 23 year old prize stallion Pivotal the farm manager explains importance of bloodlines in creating a winning horse.   At the National Horse Racing Museum the programme reveals how thoroughbred racehorses all descend from the Arabian breed, in fact from just three remarkable stallions.

Vance spends time with Roger Varian, one of the world’s most up and coming trainers, at his historic training yard. ‘Winning Post’ discovers what goes into training a champion capable of competing in Dubai and what attributes a horse has to show to prove he has what it takes.

Highlighting the technology and training involved ‘Winning Post’ shows what efforts are undertaken to turn a pedigree foal into a champion racer and what extra preparations are involved for the horses travelling to Dubai.

The programme heads for the glitz and glamour of the Dubai World Cup Carnival. Vance catches up with Roger Varian again with his horse Battersea, about to compete for the second time this year in Dubai. The event organisers give ‘Winning Post’ an insight in to the efforts undertaken to host such a successful event.

In March, ‘Vital Signs with Dr. Sanjay Gupta’ investigates habits, and whether they are not simply a question of willpower, but science.

Habits are all about what’s happening in the brain. From taking control over mindless eating to being more productive at work, ‘Vital Signs’ learns how the brain plays a central role in making and breaking habits. The programme features two figures who have become the authorities on the relationship between habits and the brain.

First up, Professor Brian Wansink, credited for his work on examining human eating habits. Based at Cornell University, Professor’s Wansink’s research has even earned him the title the ‘Sherlock Holmes of Food’. 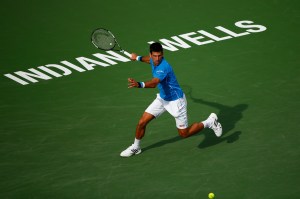 ‘Open Court’ heads to The Indian Wells Tournament this March, a tournament many consider “the fifth slam” on the tennis calendar.

The Indian Wells tournament draws more fans than the French Open –and is California’s premiere tennis event. ‘Open Court’ is at the heart of the action as Pat Cash hosts the show from the tournament.

The programme meets 14-time Grand Slam winner Pete Sampras to discuss the future of tennis in the United States and if anyone can stop Novak Djokovic this season.

‘Open Court’ also meets two-time Grand Slam winner Victoria Azarenka for an interview and a workout at her Californian training base. 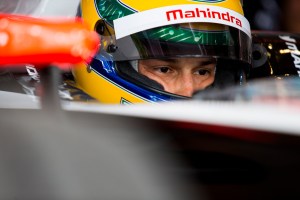 CNN’s new electric car racing show brings viewers all the action from behind the scenes of the Formula E circuit.

Presented by e-power enthusiast Nicki Shields, ‘Supercharged’ shows how cutting-edge technology is powering the cars of the future, building a new sport from the ground up and driving change for good in the wider world.

This month’s episode comes from Mexico City, one of the most congested conurbations on the planet. Shields takes a driving lesson from Aguri’s Salvador Duran on the busy streets, while the programme also looks at what measures are being taken to make Mexico a cleaner greener place.

At the track, ‘Supercharged’ walks the circuit with Mahindra driver, Bruno Senna (pictured). Nephew of Ayrton Senna, Bruno takes the programme to the high speed Peraltada corner where his Uncle suffered a big accident during qualifying in 1991 Mexican Grand Prix.

Away from the race weekend, Shields visits the Williams factory in Oxfordshire to learn how the Formula E battery is made.

The programme returns to the paddock, soaking up the atmosphere behind the scenes on the day of the Mexico E-Prix. 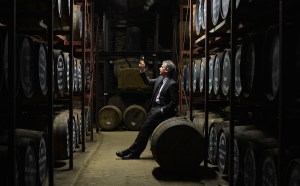 This month’s episode of ‘Make Create Innovate’, a series which explores new inventions and technologies, examines the new sources of clean energy which could power the future.

The programme reports from Edinburgh, Scotland to investigate a new bio-fuel, bio-butanol, which could replace petrol and diesel and it all comes from another essential liquid, whisky.

The by-products of the whisky distillation process are combined with other chemicals and a new fluid is produced – biobutanol – which can be used by a car or truck or plane straight away. This new approach has rejuvenated technology first used in WW2 fighter planes to help the fight against climate change today.

‘Make Create Innovate’ also explores how hydrogen is shaping up to be the power source of the future – with fuel cells being developed that could power everything from a smartphone to a city. 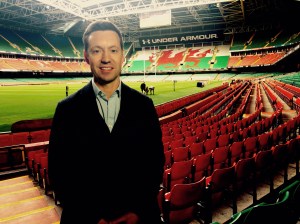 In March’s ‘CNN World Rugby’, turns its attention to North America as the HSBC Sevens World Series returns to Las Vegas, whilst also making its debut in Vancouver.

The programme also meets Admir Cejvanovic, the Bosnian-born refugee who found rugby and is now one of Canada’s rising stars. And, as the Six Nations comes to a close, ‘CNN World Rugby’ looks back at the how the title was won.