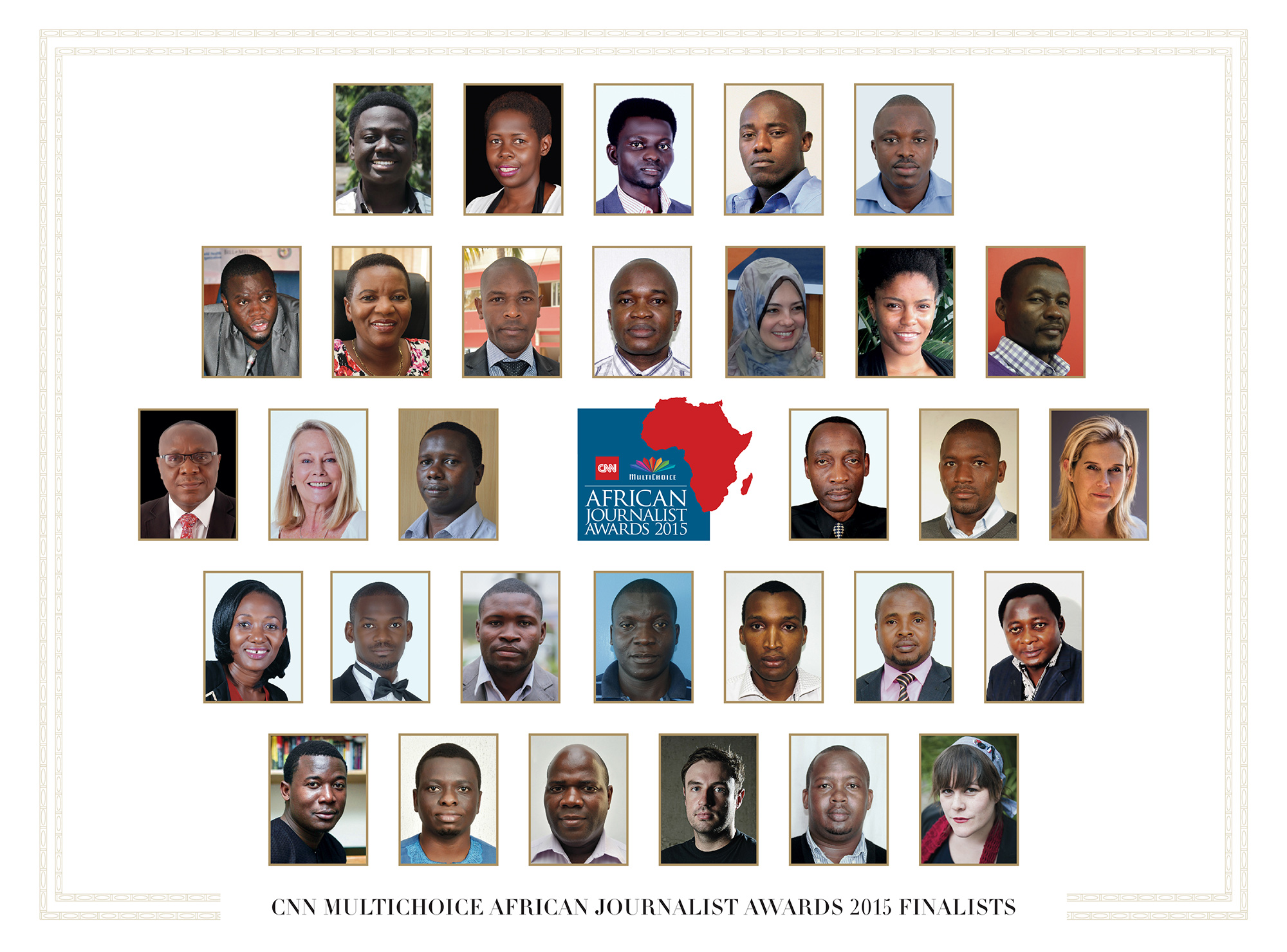 Finalists in the prestigious CNN MultiChoice African Journalist 2015 Competition were announced today by Ferial Haffajee, Chair of the independent judging panel. The competition is now in a landmark 20th year.

This year the competition received entries from 39 countries across the continent, including French and Portuguese speaking Africa.

There are 31 finalists from 15 countries:

Paul Kelemba, Freelance for The Standard on Saturday, Kenya

The competition is once again supported by the following sponsors, who continue to lend their valuable support to the awards: A24 Media, African Development Bank, Dow, Ecobank, GE, IPP Media and MSD (MSD is known as Merck in the U.S. and Canada).

The finalists will enjoy an all-expense paid four day programme of workshops, media forums and networking in Nairobi, Kenya, culminating in a Gala Award Ceremony in October 2015. In addition, winners from previous years will join this year’s finalists for a special evening to celebrate 20 years of the awards.

Tony Maddox, Executive Vice-President and Managing Director of CNN International said: “The quality and breadth of entries in this, its 20th, year is testament to the CNN MultiChoice African Journalist Awards’ position as the most prestigious recognition for journalism across the continent. CNN is privileged to be involved in this important initiative to honor the outstanding work across multiple platforms, topics and journalistic disciplines. I salute the finalists for the great work that they have done and look forward to seeing their future achievements.”

Greg Beitchman, Vice President, Content Sales and Partnerships, CNN International: “This year’s ceremony promises to be a stellar moment in the long history of the CNN MultiChoice African Journalist Awards. A combination of the strong body of work to be showcased at the 2015 awards, the presence of a number of former winners, and the backdrop of the vibrant city of Nairobi will make for an evening that celebrates the very best of African journalism.”

Tim Jacobs, CEO MultiChoice Africa: “We continue to be amazed by the resourcefulness and growth of journalists in the complexity and immediacy of the digital and online age of news and information. That is why we remain committed to nurturing and growing African journalists who have a huge responsibility and role to play and where tech-savvy readers have the ability to follow breaking stories and are not shy to engage in dialogue on a number of different platforms.  The CNN MultiChoice African Journalist of the Year Awards have for the past 20 years provided a voice for credible journalism. As we celebrate this remarkable milestone, we can only commend the journalists for leaving no stone unturned in telling the important stories.”

Imtiaz Patel, Group CEO, MultiChoice: “MultiChoice is delighted to once again be associated with these prestigious awards that give respect to the work done by journalists across the African continent. We congratulate all the finalists on their achievements and look forward to celebrating with the winners in Nairobi in October.”

The CNN MultiChoice African Journalist 2015 competition is open to African professional journalists, whether directly employed or freelancers, working in the continent of Africa who have produced a story which has been made available as a printed publication or broadcast through an electronic medium (television; radio or digital platform) whose primary audience are based in Africa.

Entries were published or broadcast in 2014 for the following awards: