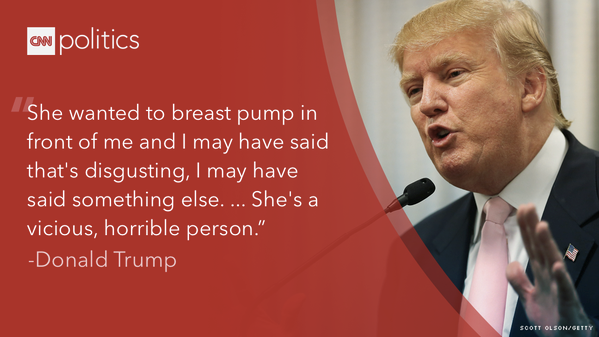 Donald Trump lashed out Wednesday at a female lawyer whom he had called “disgusting” several years ago for requesting a break to pump breast milk in the middle of a deposition, calling her a “vicious, horrible person.”

In an interview with CNN’s Dana Bash, the Republican presidential candidate claimed that the attorney, Elizabeth Beck, had wanted to pump breast milk in other people’s presence. Trump alleged that Beck was now retaliating against him because she was unhappy about having lost that legal battle, and that she had fabricated a story about Trump losing his cool and storming out of the deposition room.

“She wanted to breast pump in front of me and I may have said that’s disgusting, I may have said something else. I thought it was terrible,” Trump said. “She’s a vicious, horrible person.”

Elizabeth Beck described the 2011 encounter — first reported by the New York Times late Tuesday — as Trump having “an absolute meltdown” in an interview with CNN’s “New Day” Wednesday morning.

“She made it up. She made it up,” he said. “She’s saying, ‘Oh, he was so violent and he was so, so wild and she was afraid.’ She was afraid of nobody. She’s a tough killer in Miami everyone knows she’s a killer. They all hate her.”

Well-known for his colorful language and imagery, Trump went on to compare Beck’s interview with CNN earlier in the day to the way people who had never met Michael Jackson discussed the iconic pop star after his death.

“So many people are on television that don’t know me and they’re like experts on me,” Trump said. “You know when Michael Jackson died — I knew him very well — and everybody was talking about Michael Jackson. They didn’t know him, they knew nothing. Some of them never even met him.”

Pressed on how the 2011 incident reflects on how Trump would behave as president — and how he would react if challenged by a world leader like Russian President Vladmir Putin — Trump answered: “Believe me, I’d do very well with him. I get along with people.”