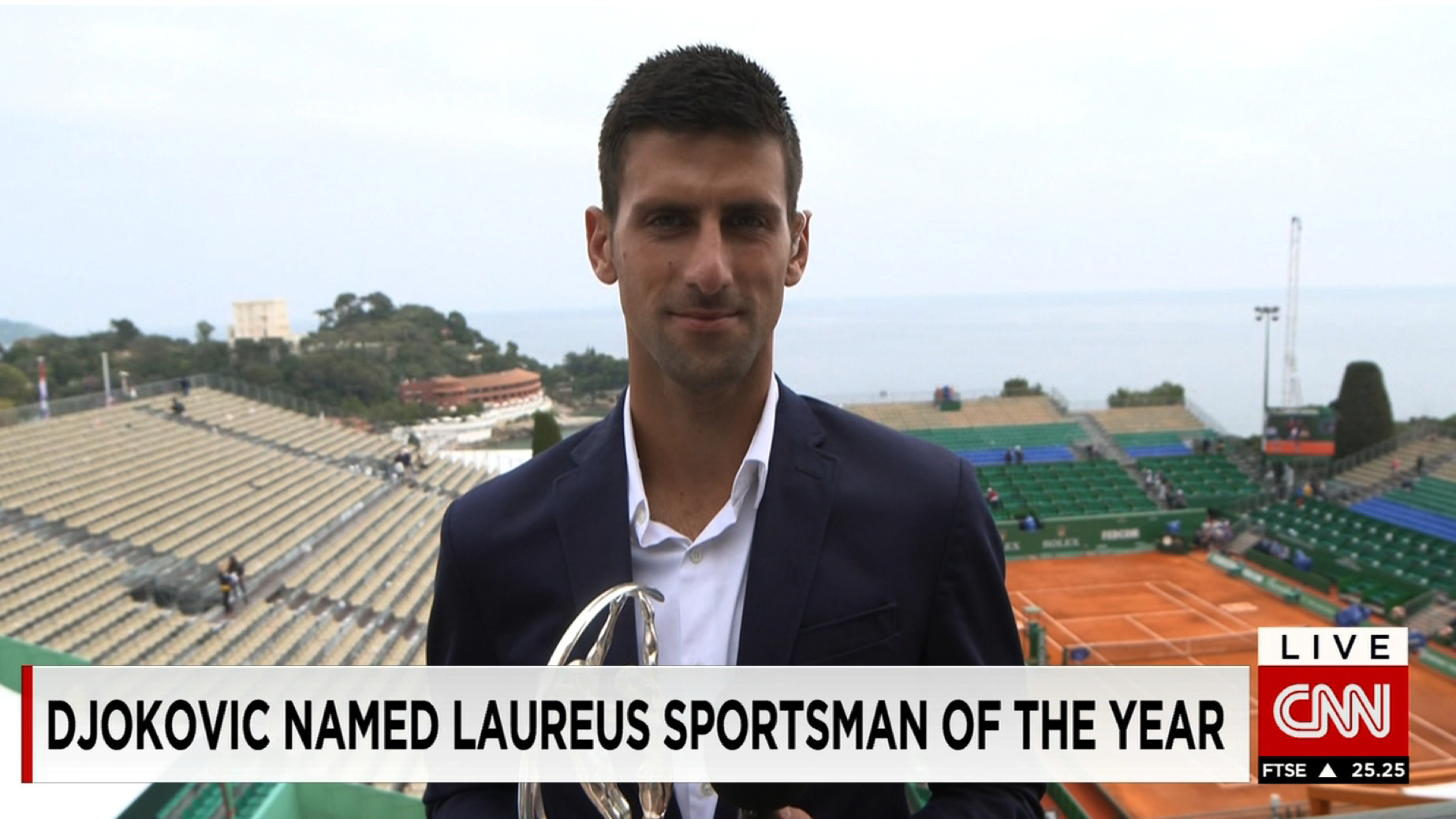 After winning the Laureus Sportsman of the Year award for the second time, world number one Novak Djokovic spoke to CNN’s Alex Thomas about taking the prestigious prize and his prospects at Roland Garros.

“This is certainly a crown for all the achievements I had in phenomenal 2014 season, that’s been highlighted with a Wimbledon trophy and a year end at number one of the world. And most importantly, my wedding and six months ago I had the honour to become a father…so all in all, it’s been the best year in my life so far,” said the 8-time grand slam champion.

When asked about his chances at Roland Garros and whether Rafael Nadal is beatable, Djokovic said: “Nobody’s unbeatable, I can tell you that. But he’s definitely an ultimate challenge on the clay courts.  He’s the king of clay. He has an incredible record at Roland Garros; he’s only lost one match in his entire career there, so — but he’s not the only player that I’m thinking about winning against on this surface. There’s Federer, of course, Wawrinka. I think it’s really a golden year of men’s tennis at this moment and I’m just trying to stay kind of self-disciplined and committed to this sport.”

ALEX THOMAS, ANCHOR OF CNN WORLD SPORT: Hello, welcome back to CNN World Sport. I’m Alex Thomas in London. Time now to speak live to the man just crowned in the last hour, the Laureus Sportsman of the year for a second time, Novak Djokovic joins us live from the Monte-Carlo Masters in Monaco.

Novak, many, many congratulations. As I just said, the second time you’ve won this award. How does it feel to be picked ahead of Cristiano Ronaldo, Rory McIlroy, Lewis Hamilton and Marc Marquez?

NOVAK DJOKOVIC: Well, thank you very much. It is truly a thrilling emotion and I’m very honored to receive this award, knowing that this award has been trusted to me by representatives of the media and of course, members of Laureus Sports Academy, the legends of the sports and people who have inspired me and many other athletes around the world in many different ways. So I want to thank them all and this is certainly a crown for all the achievements that I had in a phenomenal 2014 season that’s been highlighted with a Wimbledon trophy and — a year and No. 1 of the world. And of course, most importantly, my wedding and six months ago I had the honor to become a father of a little angel called Stefan. So all in all, it’s been a best year so far in my life and I can’t thank enough, everybody, for selecting me to hold this trophy.

THOMAS: Novak, seeing as you’ve mentioned Stefan, let’s talk about that. I’m a father of two myself and the amazing thing is, you won more — you kept on winning after the birth of your child, no sense of tiredness. How has it inspired you, becoming a dad for the first time?

DJOKOVIC: Well, honestly, it’s the best day of my life to have this fortune to become a father, to become a parent together with my wife, Jelena. We got married almost a year ago and became parents six months ago so that was probably the best 12 months I experienced in my life privately, but also professionally, as you mentioned, I’ve had quite a bit of success on the tennis court and managed to win Wimbledon and to end the year as No. 1 in the world and to not lose too many matches ever since I became a father, so that definitely gave me a great sense of serenity and peace but also a great motivation and knowing in the back of my mind that I’m playing, not just for myself, but for my family, for my son, and of course, motivates me even more to keep on playing on a high level and of course, this award is very meaningful to me in many different ways and, of course,  it encourages me to keep on doing and be persistent in playing tennis and hopefully I can maintain my level and kind of also be responsible in carrying the light of this sport in the best possible way.

DJOKOVIC: Well, nobody’s unbeatable, I can tell you that.  But he’s definitely an ultimate challenge on the clay courts.  He’s the king of clay.  He has an incredible record at Roland Garros; he’s only lost one match in his entire career there, so — but he’s not the only player that I’m thinking about winning against on this surface. There’s Federer, of course, Wawrinka.  There are many great players, great quality players.  I think it’s really a golden year of men’s tennis at this moment and I’m just trying to stay kind of self-disciplined and committed to this sport, enjoy every moment of it.

And the clay court season just has started.  I’m here in Monte Carlo.  Unfortunately I’m not able to be present tonight at the ceremony gala of Laureus awards in Shanghai, in China, but I wish I could be there.  I think I have a good reason for staying this week in Monte Carlo and playing this very important and big tournament to me.  And hopefully I can start off the clay court season in style, and we’ll see.  Hopefully I can go all the way in Roland Garros.

THOMAS:  Yes, Novak, I’m sure they’ll forgive you for concentrating on your tennis and that’s why you’ve won the award.

Final question from me, what do you want to achieve before you hang up your racquet?

DJOKOVIC:  Oh wow, that’s — that’s a very good question.  Well, in a professional level, I would definitely love to win Roland Garros.  When we mentioned Roland Garros, of course I’d love to complete the Grand Slam and of course win as many majors as possible.  But most importantly keep that flame of passion and love burning inside of me towards the sport.  I started to play when I was 4 years old, tennis, because I loved it.  I loved it with all my heart and I enjoy every moment spent on the court.  And as long as I have this emotion inside of me, I’ll keep on playing and hopefully I can have many more years in front of me.

And privately there are many things that I would like to achieve.  First of all, my main priority is to be the best husband and best father I can be.  And of course to also — to use the success and the achievements that I have so far in my career, and the privilege of being the best in what I love to do, in helping others.  So trying to be as active as possible with my foundation.  It’s been very active, to helping preschool children’s education in Serbia and around the world.  So that’s where I see myself very active in the future.

THOMAS:  A busy, busy man, and both privately and professionally we wish you all the very best.

Novak Djokovic, thank you very much for joining us on CNN.