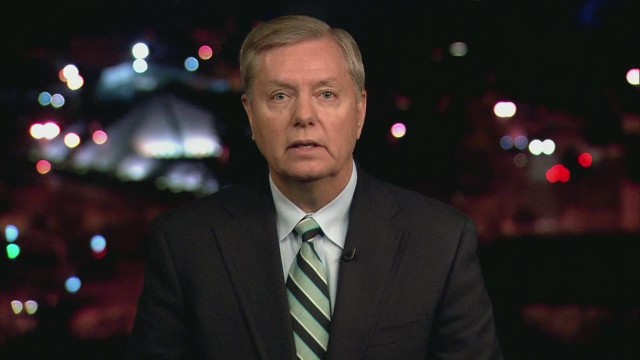 In an interview scheduled to air on CNN’s State of the Union, Senator Lindsey Graham (R-SC) spoke to Dana Bash about the North Korean hacking crisis, the closing of Guantanamo Bay, the nuclear negotiations with Iran, and the Republican playing field in 2016.

On closing Guantanamo Bay: “I don’t think there’s any appetite in Congress to close Guantanamo Bay. I think the American people want to keep it open. And after the rise of ISIS and ISIL throughout the Mideast, most people in the world are more worried about terrorists leaving Guantanamo Bay than they are of the prison being opened.”

On reaching an Iranian nuclear deal: “The Sunni Arabs and the Israelis are of one accord. Both of them fear dramatically the effects of a bad deal. I would like to end the nuclear ambitions of the Iranians peacefully, but the deal needs to be looked at and approved by Congress. They have been trying to develop a nuclear weapon, not a peaceful nuclear power program. And of all of the things that could throw the world into more chaos than exists today, it would be a bad deal regarding the Iranian nuclear ambitions.”
Full transcript after the jump.

TRANSCRIPT
THIS IS A RUSH FDCH TRANSCRIPT. THIS COPY MAY NOT BE IN ITS FINAL FORM AND MAY BE UPDATED.
DANA BASH, HOST: And joining me now is Senator Lindsey Graham of South Carolina, who is also on the Armed Services Committee.

Senator, I want to start right away with North Korea.

They issued a statement through state media on Saturday saying that on the release of the movie, “The Interview,” quote, “Obama always goes reckless in words and deeds like a monkey in a tropical forest.”

What’s your response to that?

And here’s the goal, is to make sure they feel pain from this effort to attack a — an American-owned company — an American company, to censor a movie critical of their regime. So I hope the president will make them feel the pain that is due.

BASH: How does the U.S. make them feel the pain?

What should the retaliation be?

GRAHAM: Put them back on the state-sponsored terror of — terror list. They should never have been taken off. More sanctions. The elite live very well in North Korea. Everybody else lives pretty poorly. And you can’t talk about North Korea without talking about China. You need to have a heart to heart with the Chinese. I can’t imagine anything this massive happening in North Korea without China being involved…

GRAHAM: — or at least under — knowing about it.

BASH: I mean going through China is one thing.

But is there anything even left to sanction in North Korea?

GRAHAM: You know, I really — I know that the regime lives pretty large, but put them back on the state sponsor of terrorism list and, you know, attack their infrastructure. Try to — try to do what we did with — during the cold war. Send a message to the North Korean people. Speak truth to power. Try to infiltrate their media and get the message out about exactly who runs their country and that there’s a better way.

I’d go all in in trying to expose this regime to their own peep — to the North Korean people for the nut jobs they are.

BASH: Now, you have been critical for years of the president’s leadership, particularly on the world stage. This time, he stood up to Sony. He stood up to North Korea and Sony backed down.

What do you say about his leadership now?

GRAHAM: Well, I’m glad that he spoke — spoke up and told Sony they should run the movie. But at the end of the day, have we deterred North Korea?

This should be a wakeup call for Congress. What — what’s happened here, it shows how exposed we are in America to a cyber attack. If North Korea can do this to a major corporation in America, what could other people do to our country?

And I hope the Congress will work with the president to pass some cyber terrorism legislation.

BASH: That was pretty good, Senator. I asked about the president and you turned to Congress. But let me get you back on the president. Again, you’ve been critical of him.

In this particular case…

BASH: — can you give him some kudos?

But it’s not cyber vandalism, Mr. President. This is cyber terrorism. And your response should be consistent with a terrorist attack on American values, not vandalism.

BASH: Senator, let’s turn now to Guantanamo Bay. Last week, you said that we should be filling up Guantanamo Bay with more terrorists, uh, instead of closing it.

GRAHAM: I stand ready with the president and my Democratic colleagues to close Guantanamo Bay.

GRAHAM: I bought — I would close it tomorrow if he’d move the prisoners to a military prison inside the United States. I’m not against closing the prison and transferring them to a new prison. I’m against letting them go.

I’ve tried to work with the president for years to find an alternative to Guantanamo Bay inside the United States, a prison run by our military, governed by the law of war.

BASH: Senator, you say that you’re open to closing Guantanamo Bay if there is a — a military installation in the U.S. to move the prisoners to.

What do you think is a possible option for that?

GRAHAM: I don’t think there’s any appetite in Congress to close Guantanamo Bay. I think the American people want to keep it open. And after the rise of ISIS and ISIL throughout the Mideast, most people in the world are more worried about terrorists leaving Guantanamo Bay than they are of the prison being opened.

Can you give us some scoop on what you guys talked about, particularly with regard to Iran and the possibility of Republicans like you in — in Congress pushing for greater Iran sanctions?

GRAHAM: Well, I — I met with the prime minister and really, all the major party leaders by the time the trip is over. And one thing stuck out to me — Iran, Iran, Iran.

The prime minister of Israel has been the strongest, most clear, certain voice about the dangers of a bad deal with Iran. I think most people in Israel are reassured that the Congress will take up additional sanctions against the Iranian regime. Kirk-Menendez, a bipartisan bill, will come up for a vote in January. And it says simply the following. If the Iranians walk away from the negotiating table, sanctions will be reapplied. If they cheat, if we do enter into a deal and they cheat, sanctions will be reapplied. And also, I have legislation with Senator Corker requiring Congress to approve any final deal with the Iranians.

Every corner of Israeli society politically is very much worried about Iran.
.
BASH: On Iran, let’s just say the Republican Congress can pass stiffer sanctions, can pass legislation saying that the U…

BASH: — the Congress has to approve any deal. You still have a Democratic president in the White House so you — it’s not like he’s going to sign those things, right?

GRAHAM: Well, there’s two ways. He can agree to sign legislation if it’s bipartisanly passed or we can get numbers that would override a veto.

BASH: Do you think you can do that?

I think that’s possible because the consequence of a bad deal with Iran changes the world in the most dramatic fashion. If the Iranians get a deal allowing them to enrich uranium as part of that deal, the Sunni Arab states will want an enrichment program of their own.

They very much fear the Iranian Shia Persians having a nuclear capability. Think North Korea when you think of the Iranian nuclear negotiations. The last time the international community tried to control a rogue regime’s nuclear ambitions was North Korea, where they allowed a small enrichment program to be monitored by the U.N. That failed.

North Korea has nuclear weapons. I fear that any deal between the P5-plus-1 and the Iranians could result in a North Korean outcome and you would set the Mideast on a course to a nuclear arms race.

The Sunni Arabs and the Israelis are of one accord. Both of them fear dramatically the effects of a bad deal. I would like to end the nuclear ambitions of the Iranians peacefully, but the deal needs to be looked at and approved by Congress. They have been trying to develop a nuclear weapon, not a peaceful nuclear power program. And of all of the things that could throw the world into more chaos than exists today, it would be a bad deal regarding the Iranian nuclear ambitions.

Ayatollahs with nukes is not a good deal for anybody.

BASH: All right, Senator, 2016, let’s talk about that. We have a brand new poll to reveal right here, right now, here on STATE OF THE UNION about the Republican 2016 field. Jeb Bush is way far ahead. Take a look at this. Twenty-three percent, Chris Christie is pretty far behind him at 13 percent, Ben Carson in 7 percent and then it goes on down from there on this very long list of potential candidates.

But I you look all the way down, 5 percent say they would support someone else.

Is that someone else you, sir?

GRAHAM: Well, 5 percent is — well, I don’t know. But here’s what I do know, that Jeb Bush would be an excellent candidate. I think he could win in 2016. I believe he could carry Florida. He’s got rational, logical views on immigration. He was a very good governor.

But look at it this way. Seventy-seven percent have chosen somebody else, or at least are open-minded to someone else. This primary is wide open. This is a name ID situation you — you find right now early on.

It’s like pre-season polling in football. You really don’t know until the pads connect.

But I think it’s good news for Jeb Bush, at least initially.

BASH: Your friend and former presidential nominee, John McCain, is so openly saying that he should — that you should run.

Is he trying to bully you into running?

GRAHAM: Well, uh, no, he’s been a supportive friend. And let me just say this about my aspirations. (INAUDIBLE)…

GRAHAM: Yes. I’m going to be the most effective senator I know how to be in 2015. And I will look at the presidential race along these lines. I think over the last several years, I’ve been more right than wrong when it comes to foreign policy, that the next president of the United States has got a world on fire that they must deal with and reestablish ourselves as the hope for freedom and reassure our friends and basically make our enemies fear us, which they have lost all fear of America, and be a problem-solver.

I think I have a unique capability to do things like that.

But at the end of the day, running for president is a monumental task. I think I’m uniquely qualified to deal with some of the issues we face as a nation. Whether or not there’s a pathway forward for — for me, I don’t know. I’ll look at it in 2015.

But our party, if we can get immigration right, we’ve got a good chance of winning in 2016.

BASH: I don’t know, Senator, the way you just laid that out, it sounds like a stump speech to me.

GRAHAM: Well, I think the next Republican nominee for president better be able to articulate leading from the front, not from behind, and the next nominee for the Republican Party better reject self-deportation and talking about putting the country ahead of the party. And if we’ll do those things, we can win. If we don’t, we’re going to lose.

Thank you so much.

Tags
North Korea / State of the Union with Candy Crowley