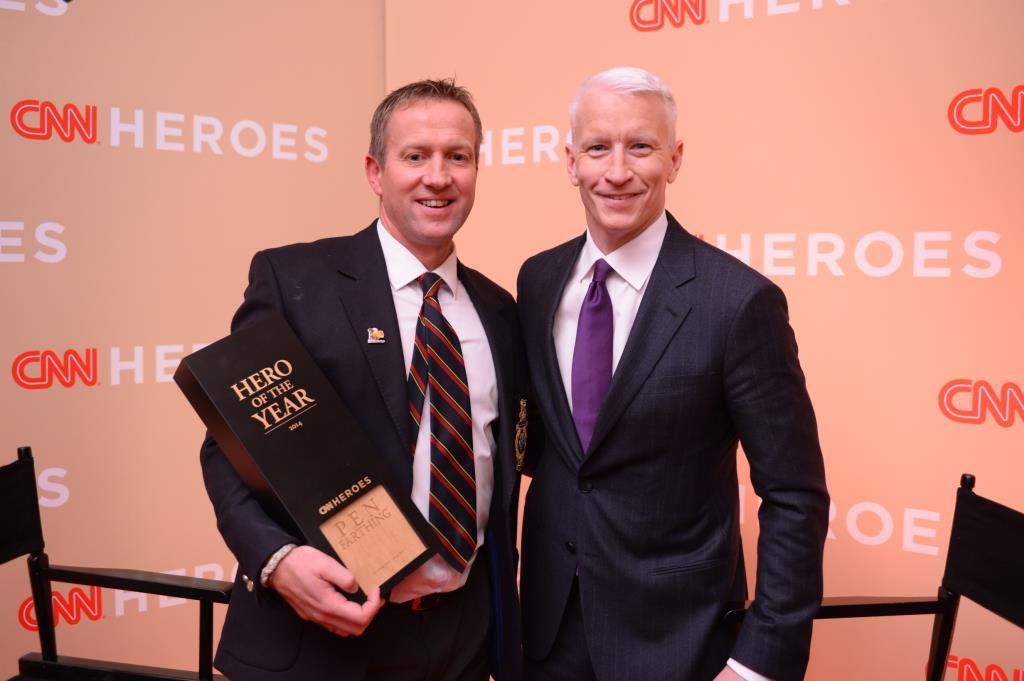 Pen Farthing of Tiverton, England is the 2014 CNN Hero of The Year

Pen Farthing, a former Royal Marine Sergeant, who reunites soldiers with the stray dogs they befriend while serving in Afghanistan, was named the 2014 CNN Hero of the Year by Anderson Cooper at the eighth-annual CNN Heroes An All-Star Tribute.

“I would really like to thank everybody who voted for Nowzad Charity and [for supporting] what we do in Afghanistan and for believing in us,” Farthing said while accepting his award.

Celebrity presenter Benedict Cumberbatch, star of The Imitation Game, presented Farthing with his honor earlier in the broadcast.

Each of the Top Ten CNN Heroes will receive $25,000 in recognition of their work. After winning the global vote, Farthing’s Nowzad Dogs, will receive an additional $100,000 grant to further aid his cause.

The Peabody Award-winning and Emmy-nominated CNN Heroes initiative honors individuals who are making extraordinary contributions to help improve the lives of others.  Since its inception, CNN Heroes has received tens of thousands of submissions from more than 100 countries and profiled over 200 heroes.

About CNN Worldwide
CNN Worldwide, a division of Turner Broadcasting System, Inc., a Time Warner Company, is the most trusted source for news and information. Its reach extends to nine cable and satellite television networks; one private place-based network; two radio networks; wireless devices around the world; CNN Digital Network, the No. 1 network of news Web sites in the United States; CNN Newsource, the world’s most extensively syndicated news service; and strategic international partnerships within both television and the digital media. For more information, visit www.CNNPressroom.com.