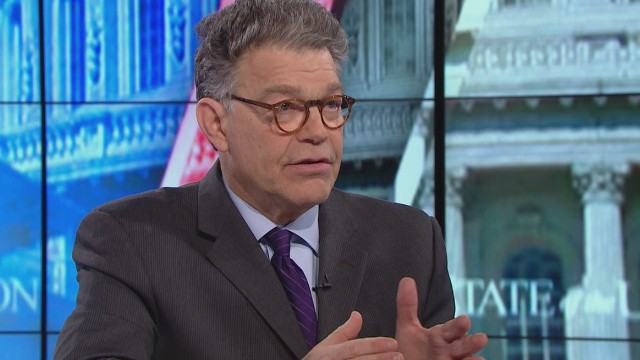 Today on CNN’s State of the Union with Candy Crowley, Senator Al Franken (D-MN) discusses net neutrality, what he calls “the free speech issue of our time.” Senator Franken explains net neutrality’s potential to affect the way Americans access the Internet. He also shares his predictions for the 2016 elections and the challenges in Washington.

Text highlights and a transcript of the discussion are below

Senator Franken on Senator Ted Cruz’s understanding of net neutrality: “He has it completely wrong and he just doesn’t understand what this issue is. We have had net neutrality the entire history of the Internet. So when he says this is the ObamaCare, ObamaCare was a government program that fixed something, that changed things. This is about reclassifying something so it stays the same. This would keep things exactly the same that they’ve been. And the pricing happens by the value of something.”

Senator Franken on Hillary Clinton and the Democratic candidates in 2016: “I very much doubt that she’ll be the only one. I’m sure someone will jump in.”

Senator Franken on Washington politics: “We have a fundamental difference on how we see the economy working best and who it should work for.”

CROWLEY: Good to see you in studio. You are a proponent of what’s called net neutrality.

CROWLEY: No fast lanes, as they say…

CROWLEY: — for the big Amazon or whoever…

FRANKEN: Whoever can afford it.

CROWLEY: Whoever can afford to pay for a fast lane…

CROWLEY: — and broader width. And just a start-up, all treated the same.

CROWLEY: What is it that is broken that…

CROWLEY: So if nothing is broken, why is the government wanting to fix it?

FRANKEN: Well, what’s broken is that the current FCC has suggested going to paid prioritization or fast lanes. So let’s go back to what net neutrality is.

That’s the way it’s been from the beginning. And we want to keep it that way

CROWLEY: If Netflix wants you not to have the little circles in your house when you’re looking at Netflix, it could pay more and get on a — in the fast lane, as it were?

I’ll give you an example with YouTube. Before YouTube, there was this thing called Google Video that Google had. And it wasn’t very good. The guys who started YouTube, there were three guys over a pizzeria in San Mateo, California. They created a superior product, YouTube. And it traveled at the same speed as Google Video and people liked YouTube better.

So YouTube won, because it was better. And a few years later, Google bought YouTube for $1.65 billion. OK, so this was three guys above a pizzeria.

Facebook was started in a dorm room in — at — at a college. We want — that’s the innovation that we have seen in — on the Internet since the very beginning. It’s always been — net neutrality has always been there.

CROWLEY: So what about the argument that this now takes the Internet providers, the Comcasts, the AT&T, and gives them no real reason to innovate, that they will hold back on expanding the band?

CROWLEY: What about that argument?

But this is not going to stop them from — from wiring the country.

CROWLEY: I want to — this has obviously entered the political realm. We saw the president weighing in on it this past week. I wanted to read you something from an op-ed that Senator Ted Cruz wrote about the issue.

CROWLEY: “Net neutrality is ObamaCare for the Internet. It would put the government in charge of determining Internet prices — prices, terms of service, and what types of products and services can be delivered, leading to fewer choices, fewer opportunities and higher prices. Government regulated utilities invariably destroy innovation and freedom.”

Your reaction to that?

FRANKEN: He has it completely wrong and he just doesn’t understand what this issue is.

We have had net neutrality the entire history of the Internet. So when he says this is the ObamaCare, ObamaCare was a government program that fixed something, that changed things.

This is about reclassifying something so it stays the same. This would keep things exactly the same that they’ve been.

And the pricing happens by the value of something.

CROWLEY: I can’t let you go without talking a little bit about some politics. You won your reelection and lost a lot of colleagues on the Democratic side.

What’s the message Democrats should walk away from it with?

FRANKEN: Well, I’m not — I can tell you what I did in my race and maybe we can draw a lesson from that. You know, I got — the first race I won by 312 votes. And there were, I think, a lot of Minnesotans who didn’t quite know what to expect from me.

But what they saw is I worked every day in what I saw as the interests of Minnesotans. And I worked across party lines to find common ground. While I also found common ground I stood my ground. When the powerful would come after the — the middle class or those aspiring to be in the middle.

And they — we have a fundamental difference on how we see the economy working best and who it should work for.

CROWLEY: And finally, if Hillary Clinton should be the only candidate in the Democratic field, should she get in, is that good for the Democratic Party?

Or do you think Democrats really need some sort of spirited primary?

FRANKEN: You know, again, I’m not a — you know, I’m not a political analyst. And I — I very much doubt that she’ll be the only one. I’m sure someone will jump in.

CROWLEY: — viable, as we sort of — and people now are talking, you know, about entitlement and, you know, that’s not good and — and she seems to be the only one now that people are looking to.

And I’m wondering whether you think that’s healthy or whether there ought to be sort of a larger debate.

FRANKEN: Well, I don’t know how you’d make someone else viable. They — they have to make themselves viable.

But I think there’s — I’m — I’m sure that there will be a number of other people in the race.

CROWLEY: We’ll wait and see. We’ll have you back and see what you think of all of them.

Thank you so much for coming by.

FRANKEN: Oh, it’s been a pleasure.