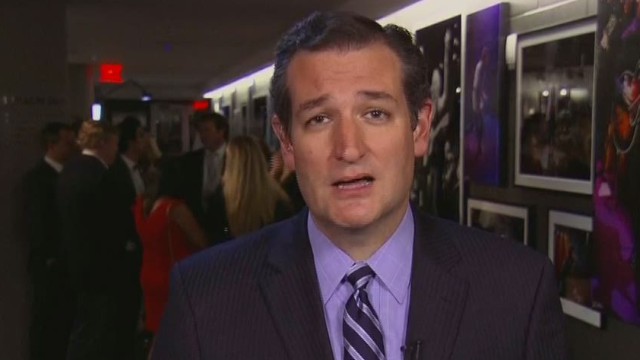 As part of CNN’s Election Night in America coverage, Wolf Blitzer spoke to Senator Ted Cruz (R-TX) about the midterm election results and the future Republican majority in the Senate. While Senator Cruz expressed his enthusiasm for the Republican victories, Senator Cruz would not say whether or not he would support Senator Mitch McConnell (R-KY) as Majority Leader.

Sen. Cruz on his support for Sen. McConnell as Majority Leader:  “That will be a decision for the conference to make and that will be decided next week.”

Sen. Cruz on the results of the midterm elections:  “It was a powerful repudiation of the Obama agenda, the Obama economy, which isn’t working. And now really the responsibility falls on Republicans, now that we have been handed the majority, for us to stand up and lead, and I very much hope that’s what we do.”

BLITZER: Let’s bring in a special guest, Senator Ted Cruz. The Republican senator from Texas is joining us now. Let’s talk about what is going on. Senator Cruz, thanks very much for joining us. Got a big smile on your face. You should have a big smile on your face. The Republicans have done incredibly well. You are now going to be in the majority in the United States Senate. Quickly, will you support Mitch McConnell as your leader in the United States Senate?

SEN. TED CRUZ, R-TEXAS: Well, that will be a decision for the conference to make and that will be decided next week. But I’ll tell you, tonight was a terrific night for Republicans. It was a powerful repudiation of the Obama agenda, the Obama economy, which isn’t working. And now really the responsibility falls on Republicans, now that we have been handed the majority, for us to stand up and lead, and I very much hope that’s what we do.

BLITZER: Well, I know that you don’t want to answer the question, but let me try one more time, because a few days ago you were sort of reluctant to make it clear you would support Mitch McConnell as the Republican, as the majority leader. The Republicans will be in the majority. Can you not tell us now whether you will or you won’t support Mitch McConnell? What is standing in the way?

CRUZ: Wolf, I will give you the same answer I did the first time you asked that question, which is that will be a decision for the conference to make next week. And tonight, what I’m focused on is the results of this election, which is a resounding Republican majority.

And I would point out that, the American people, they’re frustrated with what is happening in Washington. But now the responsibility falls on us to lead with a positive, bold, optimistic, pro-jobs agenda. And I hope we see Republicans unite. Every Republican unite in the Senate and stand together and deliver on the promises that we’ve been making on the campaign trail. I think a lot of voters are skeptical of politicians in both parties, and I very much hope that my party can validate and earn the trust that’s been placed in us. And that we can stand up, listen to the people, and come together for positive, pro-growth economic legislation.

BLITZER: You see an opportunity to now work with the president of the United States in his final two years and get some compromises on some of these key issues that are so important to the American people?

BLITZER: You might be able to pass the legislation in the House and the Senate. You will be in the majority. But he has got that veto. As you well know, he is going to be able to veto that kind of legislation. And you don’t necessarily have a two-thirds override.

CRUZ: No doubt. I think we should stand together. We should use reconciliation, we should pass full repeal. You’re right, the president will almost surely veto it. But then we should start systematically repealing some of the most burdensome aspects of Obamacare. We should systematically pass legislation that provides that you can’t have your health insurance canceled, you can’t lose your doctor because of Obamacare. Honor the president’s promise there. We should change the law so that people aren’t forced into part-time work. Millions of people, especially single moms, have been forced into part-time work. We need to change the law to do that. We need to prohibit insurance company bailouts. We need to pass law after law after law, responding to the American people, and put them up to the president and see if he is welling to veto every aspect of legislation that would protect the American people and provide relief to the people who are suffering.