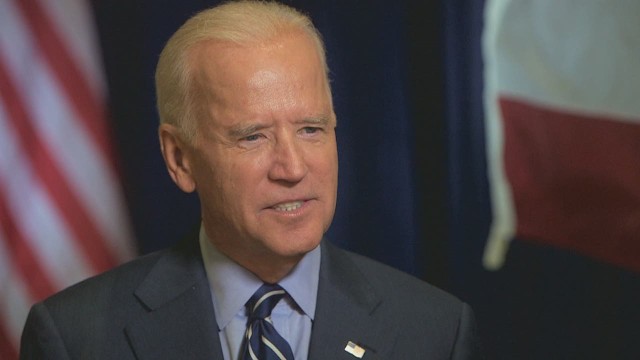 For the Monday, Nov. 3 edition of CNN’s New Day, CNN chief political analyst Gloria Borger interviewed Vice President Joseph Biden. In a television exclusive, Biden talked about why he feels Democrats may defy dire midterm election predictions, why the electorate is anxious, and whether Hillary Clinton’s decision to run for president in 2016 will impact his own decision.   More from this interview will air later today on CNN’s The Situation Room with Wolf Blitzer.

Text highlights and the full transcript of the discussion are below:

JOE BIDEN, VICE PRESIDENT OF THE UNITED STATES: First of all, I don’t agree with the odds makers. I predict we’re going to — we’re going to keep the Senate.

BIDEN: I’ve been in 66, 67 races all told. And I don’t get the feeling that the odds makers are giving.

BORGER: But what if that were to be the case?

BIDEN: Well, I don’t think it will change anything in terms of what we — what we’re about. We — we know we have to get done the last two years, and quite frankly, going into 2016 the Republican have to make a decision whether they’re in control or not in control, are they going to begin to allow things to happen, or are they going to continue to be obstructionists? And I think they’re going to choose to get things done.

BORGER: Will the White House have to change the way that it does business?

BORGER: So here we are out in Florida. And you were here campaigning for Charlie Crist.

BORGER: And the president has stayed mostly back in D.C., largely because Democrats in red states wanted him to stay in D.C. Was that the right strategy, keeping the president off the campaign trail in a large way?

BIDEN: Look, I ran for the Senate sex times. And one of the things I know about Senate races off years and on races, and on years, the same as governor’s races, is it’s all local. It all gets down to what the specific issues in that — in that district or that state is. And each senator makes a judgment about whether or not it will be — he thinks it’s helpful or hurtful.

BORGER: Yes, but this is the president of the United States. You’ve got a lot of Democrats up for reelection. Normally, you’d have a president out there.

BIDEN: Look, we’ve been seeing this a lot. There are lots of places where first term, second term, George Bush didn’t show up, the older Bush, Reagan. I mean, you know, every state is different. And look, here’s the deal. If you look at every single major issue in this campaign, the American public agree with our position: from federal support for infrastructure to minimum wage to marriage equality, every single time.

BORGER: Well, wait a minute. But our polls show voters are angry; they’re fearful. They’re frustrated, not only about domestic policy like a rollout of the president’s healthcare reform but also on the handling of Ebola and ISIS. So you know, the question is, how do you fix that? I mean, the public isn’t with you on that.

BIDEN: Two issues. What the republic — the public is concerned and frightened because it’s a frightening world. A lot has happened. And what happens, Gloria, is on every one of these crisis, there’s all kinds of attention, understandably, from Twitter to major programs like yours.

But what happens is when the follow-up occurs, there’s not much follow-up. For example, when — when the Russians invaded, crossed the border into Ukraine, it was, “My God, it’s over, and things are going to” — you know, “Why’d they do it? To stop an election from occurring. To keep Ukraine from moving west.” But all those things happened. We put it under control. Still a problem.

BORGER; So the public shouldn’t be anxious about Ebola or ISIS?

BIDEN: No. No, I think the public should not be as anxious as they are, but it’s understandable why they are. There is no existential threat to the United States right now. There are fewer than five cases of Ebola in the entire United States of America.

The American public is gaining confidence in the fact — in the way this is being handled, that science does matter.

You look at what’s happening with ISIS. ISIS is not an existential threat to something — happening to someone in the United States of America. It’s a serious problem overseas. But it’s confusing and frightening. And it’s totally understandable. We’ve got to figure out — we, the president and I, have to figure out

BORGER: I need to ask you, of course, where is your head right now on a — on a race?

BIDEN: It’s my job. There’s plenty of time to make that decision.

BIDEN: No, there really is. I mean, look, everybody talks about how, you know, everything is going to be done by the summer. And I don’t see that at all. I’m confident and if I decide and I haven’t made a decision.

BORGER: It’s not about Hillary?

BIDEN: It really is not. I mean, you know me too well. I mean, if I run, I’m confident I will be able to mount a campaign that can be financed, and it will be credible and it will be serious.

BORGER: Would you run if she runs?

BIDEN: Absolutely. That’s not the reason not to run or to run. The question is, am I — am I convinced I am best positioned of anyone else to lead the country the next four years?

BIDEN: That’s a decision I have to make.

BIDEN: Not at all. I mean, it really — I know you know me well. It really doesn’t bother me at all. What I am focused on, for real — I know I sound, more than I say. It doesn’t sound real.

BIDEN: That no, but I honest to God have not made up my mind. It’s just that basic, that simple.