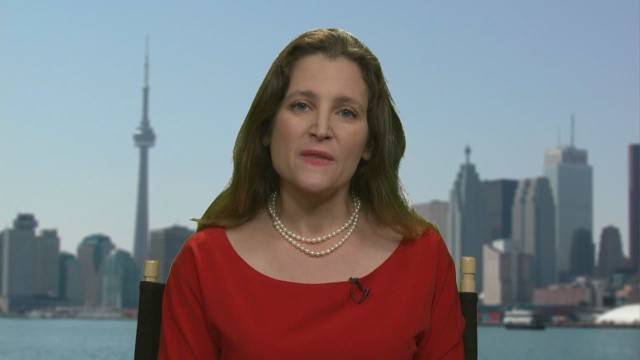 Freeland on the Ottawa shooting

CNN’s FAREED ZAKARIA GPS features an interview with Chrystia Freeland, a member of Canadian parliament who was inside Ottawa’s Centre Block as shots were fired and Michael Hayden, former Director of the NSA and CIA. Freeland and Hayden spoke with Fareed Zakaria about recent lone wolf attacks and how to react to them in the future.

Chrystia Freeland, a member of Canadian parliament who was inside Ottawa’s Centre Block as shots were fired, on being in lockdown on Parliament Hill: “Yes, Fareed, it was really frightening, particularly at the beginning.  Like a lot of people who were inside Centre Block, I heard the shots, and I ran to take cover in a room. For the first few minutes, maybe even the first hour or so, we didn’t know if it was just one gunman, if there were others there, and we were worried.”

Chrystia Freeland, a member of Canadian parliament who was inside Ottawa’s Centre Block as shots were fired, on whether Canada has a ‘jihad problem’ due to large number of foreign-born citizens: “I think one of the things that is under attack is Canadian pluralism and Canada as a diverse society. It’s really important for all of us to stand up and say we’re not going to let that be damaged.”

Michael Hayden, former Director of the NSA and CIA, on the possibility of domestic lone wolf attacks: “Frankly, Fareed, the things we’re now doing in Iraq and Syria — which I strongly support and would even support expanding them — makes it more likely that folks like this are going to be motivated to do these kinds of things.”

FAREED ZAKARIA, CNN HOST: So let’s dig deeper, both on the Ottawa attack and on the problem many have been discussing in its wake, how to defend against so-called “lone wolves”. Is there any way to do it?

My guests: Michael Hayden, who has run both the CIA and the NSA. And Chrystia Freeland, a former journalist, now a member of Canada’s parliament, who was on Parliament Hill on Wednesday when those shots ran out.

Chrystia, you were in lockdown for almost 10 hours. Did it ever get really scary?

CHRYSTIA FREELAND, MEMBER OF CANADIAN PARLIAMENT: Yes, Fareed, it was really frightening, particularly at the beginning. Like a lot of people who were inside Centre Block, I heard the shots, and I ran to take cover in a room.

For the first few minutes, maybe even the first hour or so, we didn’t know if it was just one gunman, if there were others there, and we were worried. I would like, though, to single out how well the House of Commons security officers and the RCMP responded, and also to point out, although we, the MPs, and staffers and visitors to Canada who were in lockdown were scared, Corporal Nathan Cirillo died. He’s going to be buried on Tuesday, and our whole country is really sad for him and his family.

ZAKARIA: Chrystia, you wrote a piece about all of this called “Canada, keep calm and carry on.” And it is striking. I mean, you have lived in the United States for a long time. The difference between perhaps what is sometimes an overreaction to these kinds of events in the United States is that in Canada, there seems to have been a very measured and calm attitude in the face of it.

FREELAND: Yes, I was really, really proud of the reaction of all of Canadian society. I thought the security forces were very calm. They took their time. They kept us in lockdown while they cleared out parliament. I thought the Canadian media behaved really admirably, not hyping the situation, and I was proud to be in parliament on Thursday morning at 10:00 in the morning when we were back at our desks. It was a very nonpartisan moment and we were all there to say we’re going to keep on going.

On Friday night at 8:00 p.m., the speaker sent out a message to all of the MPs saying we’re opening up the grounds of parliament again to the public because that’s how we do things here. That was the right thing to do.

ZAKARIA: And finally, Chrystia, would it be fair to wonder about whether Canada has a kind of jihad problem? Most people don’t realize, but Canada actually has more immigrants, more foreign-born citizens, than the United States does. And so, in that mix, is there a problem there somewhere?

FREELAND: Well, Fareed, I really appreciated your opening remarks and I think one of the things that is under attack is Canadian pluralism and Canada as a diverse society. It’s really important for all of us to stand up and say we’re not going to let that be damaged.

There was a worrying incident on Friday where a mosque in Cold Lake, Alberta, was defaced and someone wrote go home on the mosque, and that was terrible. That’s exactly what we can’t let happen.

But what was really heartening was the community’s response. People spontaneously came out, washed off the mosque, and people brought signs saying, “Canada is your home”, and that’s really our message to Canada’s Muslims, to Muslim Canadians. You’re part of this community. We’re so glad you’re here and we’re going to respond to this together.

ZAKARIA: Michael Hayden, what do we do about these lone wolves, the guys who seem to get radicalized because they are radical or for whatever reason? How does one handle this?

MICHAEL HAYDEN, FORMER CIA DIRECTOR: Fareed, it’s a very, very difficult problem. And it’s not one that we can make go away.

Some of these attacks are going to occur even if the security services in a country do everything they’re capable of doing. I mean, at what point does freedom of speech and freedom of thought cross over into imminent violence? And thereby lets the community intervene? That’s a very difficult line.

And as pointed out already, this may be more about resilience than it is about prevention. What happened in Canada last week was a tragedy. But the resilience of the system, the action of the sergeant-at-arms, prevented it from being a catastrophe.

ZAKARIA: As you point out, in many of these cases, maybe there was some information. In fact, from what we know in one of these cases, the guy who shot the soldier, he was on a kind of a list. But is there much you can do when somebody is on a list but has not actually committed a crime or a terror act yet?

HAYDEN: Fareed, within a year of 9/11, I was meeting with our English-speaking allies at a conference, and one of the members there pointed out that our new dilemma was how do we deal with the not yet guilty? And that’s precisely a definition of the problem we now have. And the answer is, we can only deal with that up to a point. Beyond that point, in order to preserve our liberties, we’ve got to live with some degree of threat.

ZAKARIA: Does all this, you believe, put a different light on the whole issue of NSA data mining and things like that? I mean, presumably, you would argue this is why you need pretty broad powers to look and listen?

HAYDEN: Well, there are different regimes in the United States and Canada. Canada is a bit tougher with regard to what they allow in terms of government surveillance. It’s got a more generous asylum policy.

One of the laws that Prime Minister Harper wants to change is how much information Canadian services can share with American services. Fareed, all free peoples have to balance their security and safety with their liberty and privacy.

I think the Canadians are going to recalibrate a little bit. We’ve calibrated based upon what we believe the threat is here in the United States. But this isn’t the forces of light and the forces of darkness. This is what democracies have to do all the time.

ZAKARIA: And the key issue both of you seem to feel is resilience — the ability to bounce back from these perhaps inevitable problems, right, Chrystia?

FREELAND: Yes, absolutely. I was just going to single that out and say I think the key here is resilience. I think we have to understand this is not something that can be made to go away with a magic wand.

And we have to really be clear that it’s really important to secure our democracy, but it’s also incredibly important not to let these attackers achieve their goal, which is to wreck and warp our democracy from the inside. We have to remain who we are.

And you know, on Thursday morning, Canada was still the same country it was on Wednesday morning. That’s really, really important not to let that change.

ZAKARIA: Michael Hayden, a final quick thought from you. Did anything about this worry you about for the United States? Or are we — you know, are we in good shape?

HAYDEN: Well, we’re in no better shape than Canada. We have this danger that you have pointed out in your opening, Fareed, about the self-radicalized individuals. There’s no communications between any of these people in Canada back to any Islamist groups in the Middle East that we’re aware of.

And so, this is going to be a very difficult challenge for us over a long period of time. And frankly, Fareed, the things we’re now doing in Iraq and Syria — which I strongly support and would even support expanding them — makes it more likely that folks like this are going to be motivated to do these kinds of things.

ZAKARIA: Michael Hayden, Chrystia Freeland, thank you so much.

We will be right back.