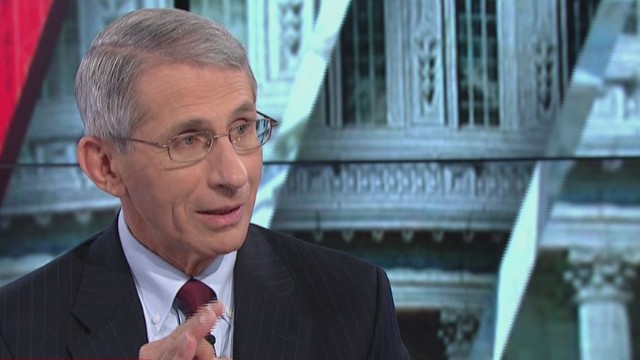 NIH Director “No further cases” of Ebola in US

Text highlights, video, and a transcript of the discussion are below

Fauci on a travel ban: “It would be very, very difficult if you lost control of easily tracking people.  You have got to look at the numbers to look about how many people are really trying to get into the country. We have 36,000 people in two months went to airports to get out of those three countries; 77 were blocked because of a health issue. When they investigated them, none of them had Ebola. A lot of them had malaria.  So, there’s not a lot of people trying to get into the country.”

Fauci on known Ebola cases in the US: “No further cases. Just the two infections. So, we have two infections that have occurred here in the United States.”

CROWLEY: In the interview you just heard, Senator Ted Cruz says, in effect, never mind the doctors who are advising President Obama against ordering a travel ban because of Ebola, because those same doctors work for the president.

With me now, one of those doctors, Dr. Anthony Fauci, longtime director of the National Institute of Allergy and Infectious Diseases.

Like it or not, we’re in a political time, two weeks from a midterm. And the feeling at least expressed by Ted Cruz that the travel ban is absolutely necessary, makes total sense, but that doctors don’t want to — want to tell the president that because he is against a travel ban.

I have never had an experience where a president is telling me to tell him something that he wants to hear. The president and the health officials, Sylvia Burwell and others, ask you what your opinion…

CROWLEY: But no pressure?

FAUCI: None at all. They just ask, what — what is your opinion about this?

And that’s the reason why we give the opinion. We express the — we respect the opposing opinion, but what was just articulated by Senator Cruz, the fact is, it would be very, very difficult if you lost control of easily tracking people.

You have got to look at the numbers to look about how many people are really trying to get into the country. We have 36,000 people in two months went to airports to get out of those three countries; 77 were blocked because of a health issue. When they investigated them, none of them had Ebola. A lot of them had malaria.

So, there’s not a lot of people trying to get into the country. So, that’s the thing that needs to be understood.

CROWLEY: Right. I guess what — what is worried about by a number of people is that one can do a lot of damage if unchecked.

CROWLEY: … and for — depending on where they were — origin?

FAUCI: Well, fever, symptoms, and whether or not they came into known or suspected contact with an Ebola patient.

FAUCI: It’s not just fever. They get questioned. CROWLEY: Right.

But since, first of all, I suppose they could lie about being in…

CROWLEY: And then the question is, what good does it do to check them at the airport if, in 21 days, they could still show that they do have the Ebola virus?

CROWLEY: But it doesn’t really help keep out…

CROWLEY: … those people who may have it.

FAUCI: It has some substantive advantage, that you could catch someone.

For example, someone flies from Liberia to Brussels, maybe not incubating, not a fever yet, gets to Brussels a few hours off in Brussels, flies from Brussels to Dallas or what have you. They could develop a fever during that period of time. So, you shave off a little bit more of the risk.

CROWLEY: Let me ask you, get down to some of those who have unfortunately contracted Ebola.

CROWLEY: How is Nina Pham? She’s under the care at NIH. How is she doing?

FAUCI: She’s doing fine. Her condition is fair. She is stable. She is resting comfortably. Ebola really knocks you out. I had a very long conversation with her. She’s a lovely young lady. I think when the world gets to see her and we hope she’ll be out and we’ll walk out of the hospital with her, you’ll see what I’m talking about. She’s doing fine.

CROWLEY: Do you know anything about Amber Vinson, who of course is the other nurse from the Dallas hospital and she is down at Emory?
FAUCI: No, I actually — Candy, I don’t. I’m taking care of Nina. I know a lot about Nina but not much about Amber.

And let me ask you the — are you using, if we understand, reading the press releases about 10 doctors and nurses to treat Nina…

CROWLEY: …at this point to care for her.

FAUCI: We have two shifts — we have two shifts, they’re 12-hour shifts right now. We have a lead doctor, Dr. Rick Davey, who’s — the person who’s right there in the room with her. We have four or five nurses. They just change shifts. If things have a problem, where we have to do a lot more intensive things we’ll switch it to eight-hour shifts and bring more people in.

CROWLEY: Why then did it take 70 folks at the Dallas hospital to treat an Ebola patient? Mr. Duncan who unfortunately —

FAUCI: I think there were a lot of people, technicians coming in, going out of the room, and getting samples and things like that. We have at the NIH, a very specifically equipped, trained, experienced people who are specifically dedicated only to that type of a situation. So that’s why it’s different.

CROWLEY: But we will be back with you and talk to you on the other side.

CROWLEY: Back now with Dr. Anthony Fauci from the National Institutes of Health.

Today as I understand it, marks the 21st day…

CROWLEY: …for the family members of Mr. Duncan who had been in isolation and those who have been monitoring around him.

CROWLEY: Are they free and clear? They can walk (ph) now (ph)?

FAUCI: When you get beyond 21 days you’re clear. And the people who were actually first saw him in that group in the emergency room, they’re at that 21 days right now.

CROWLEY: So — and family members want to assume after — so that’s just for the first time.

CROWLEY: The second time then we’re two, three days away from that.

CROWLEY: As far as you know, in that circle of those who treated Mr. Duncan, once he was put in isolation, no further cases?

CROWLEY: Right. And nobody is showing a fever or anything that was connected to any of these folks (ph)?

FAUCI: No. They are being monitored at various levels, some quarantine, some active, some passive. They’re being monitored carefully to see if there’s any symptoms, if it is, to make sure that they’re under the proper type of isolation and care. So, there’s very strict monitoring of that.

CROWLEY: I want to show you some pictures we’ve seen over the past week and get your reaction to them.

One of them is Frontier Airlines as you know, transported one of the nurses to Ohio. Now, this is — they gave us this video and this is like what they did on the plane.

CROWLEY: It appears to be steam cleaning. Here’s what we think we know, is that she was not showing symptoms or maybe she was…

CROWLEY: …on this flight. Is this going to do any good? Steam cleaning? I mean, I’ve never met a plane…

CROWLEY: …that shouldn’t have a steam cleaning.

We call that an abundance of caution. You’ve heard that terminology often. Just so they know the context in which that was done. If a person doesn’t have any symptoms they’re not capable of transmitting it. The body fluids that you see physicians and nurses, those are the ones that are in at least a hypothetical and a practical risk.

What they’re doing right there now is on the assumption that maybe there was enough virus in a person when they were sick, to be able to get on sweat to put it on a hand. But we know from a fact that, first of all, let everybody know that there’s no such a thing as zero risk. But when you do relative risk, the chances of someone who is sitting down well to have enough virus to get into a body fluid- like sweat to get on a rail that’s a dry rail, not zero but so vanishingly low, that there are so many other risks you need to worry about. But what they’re doing there is just absolutely make sure that you go the extra step.

FAUCI: That’s what that’s all about.

CROWLEY: And then I want to show you a — something that went viral. And it was bringing, and I believe this is nurse Vinson actually, and it is a picture of a bunch of folks in their hazmat suits and then this guy with a clipboard, right? He is walking along with them. They’re all dressed up in their hazmat and he’s all taking stuff from them and carrying a — this was hard to understand. Like either they’re overdressed or he’s underdressed.

FAUCI: OK. So remember you’re talking about direct contact with body fluid. OK? The risk of that person walking next to him is essentially zero. The perception of people in hazmat here and someone not can obviously be misleading. But he should have, I think just for public relations appearances —

FAUCI: Well, let me just tell you, when Nina came into our hospital, we had people — and this is good for what you said. We had people take her out of the ambulance with the hazmat suit to make sure — and she was someone who clearly had Ebola, walking by over here around and the nurse who works for me said, Fauci, over there. Just move. That’s exactly what we did. It’s just the abundance of caution. Essentially no risk there but bad interpretation.

CROWLEY: And then this cruise ship that got turned away from Belize…

CROWLEY: …because it turns out that a lab worker at the Dallas hospital that handled perhaps some of — a specimen of some sort from Mr. Duncan showing no symptoms, isolates herself and her traveling companion. Belize won’t take her so that she can go someplace else so it has to come back to port. Was that necessary?

FAUCI: I think not. But just — let me explain what went on. When his risk went from self-monitoring to active monitoring, that means he needed to be actively monitored. He had no symptoms. He had no fever. There was no way he was going to transmit it to anybody but the reaction we have a potential Ebola patient here triggered a series of events that medically were not necessary.

He should have just been taken back and go into active monitoring which is where he is. That’s what should have been done. That was not necessary. But Candy, you can understand why it was done because fear is something you need to respect and understand.

CROWLEY: Right. And finally, Ron Klain, have you spoken to him yet? He’s the new Ebola czar.

CROWLEY: Right. Do you need him?

FAUCI: He’s a superb manager. He’s a great organizer. We have coordination at the White House. Remember we had it from (ph) Lisa Monaco and (INAUDIBLE) Susan Rice. They have big day jobs so to have somebody that’s totally dedicated to that, good idea.

CROWLEY: Dr. Fauci, thank you for coming by. You are a busy guy these days. We appreciate your time.

FAUCI: Good to be with you.