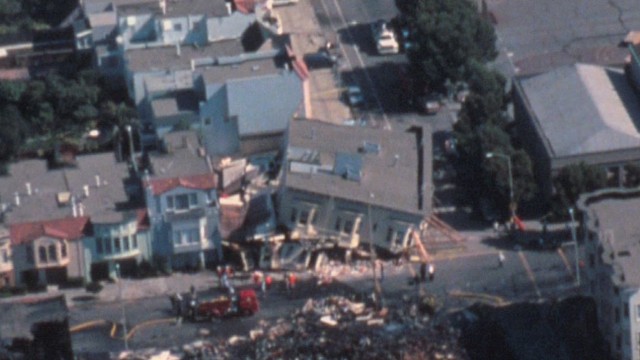 On the evening of October 17, 1989 — as the first pitch was about to be thrown in the third game of the World Series — disaster struck as the world watched live.  It was the most powerful earthquake the Bay Area had seen since the one that devastated San Francisco in 1906.

In a CNN Special Report titled San Francisco Shaken: 25 Years Since the Quake, CNN’s Randi Kaye reports on the aftershocks – of the emotional kind – that can still be felt decades later.

Bill Ray still hears the words his wife whispered to him the last time he saw her, trapped beneath the wreckage of their home. Dorothy Otto remembers the screams of people being burned alive all around her.  And, Desiree Garcia finds stability and sobriety through her Christian faith, after years of battling addiction. She says her problems began the day her father died from injuries he got while trapped in rubble for four days.

In all, the ’89 quake, named Loma Prieta, killed 67 people and caused as much as 10-billion dollars in damage, yet it was only one-thirtieth the size of the 1906 quake. While it wasn’t “the big one” that scientists are certain will come,  the ’89 temblor did teach the region what it needs to do to better stabilize its infrastructure; and to prevent another generation of Bills, Dorothys and Desirees.

Is it happening fast enough? Will the Bay Area be ready? On Tuesday, October 14th at 9pm ET/PT, Randi Kaye will share stories of the past San Francisco can never forget and the future damage they’re working desperately to prevent.