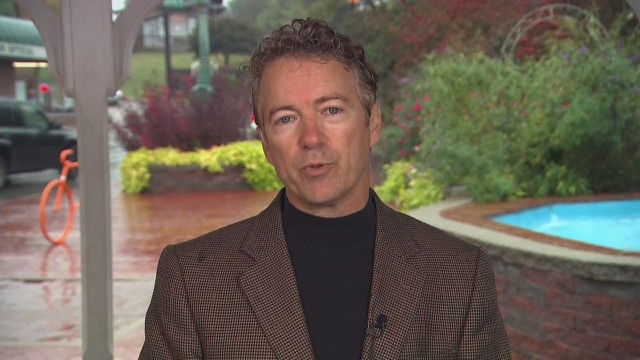 CNN’s Wolf Blitzer spoke with Sen. Rand Paul (R-KY), following the senator’s meeting with NAACP leaders in Ferguson, Missouri. Highlights from the interview are after the jump. Blitzer’s full intv with Sen. Paul will air today in the 5 p.m. ET hour of The Situation Room with Wolf Blitzer.

CNN.com: What Rand Paul thinks is the ‘biggest mistake’ for GOP // http://cnn.it/1EDXCTU

BLITZER: Are you with President Obama when it comes to his policy of trying to degrade and ultimately destroy ISIS?

So I said a year ago that the irony they will have trouble overcoming is that we will someday be fighting the weapons that we sent into the Middle East. And I think that irony is now. I think we do have to do something about ISIS. And I do agree with military action against ISIS. But I think it’s disappointing that we are now fighting against our own weapons.

BLITZER: Did you get a sense they liked what they heard from you?

PAUL: I think it’s a beginning of the conversation. And I don’t want to characterize how everybody else feels about what I said. But I think it was a good opening to the conversation. And I think in the Republican Party, the biggest mistake we’ve made in the last several decades is we haven’t gone into the African American community, into the NAACP and say you know what, we are concerned about what’s going on in your cities and we have plans. They may be different than the Democrats, but we do have plans and we do want to help.

And I think beginning that conversation will change the country if those parties are competing for votes and both parties are bringing alternative ideas to the cities, then maybe some good will happen.

BLITZER: On Ebola, do you have confidence in the way the federal government is dealing with this crisis?

And I ask you also because you’re a physician.

PAUL: You know, the thing is is that I understand people in government not wanting to create panic. And I don’t want to create panic, either. But I think it’s also a mistake on the other side of the coin to underplay the risk of this.

The administration has been saying over and over again, oh, this is only transmitted through direct bodily fluids. They make you think that this is like AIDS and not very contagious.

And then in the next statement they very quietly say, oh, but if you’re within 3 feet of someone, we call that direct contact.

Well, I don’t think many Americans think standing 3 feet from someone is direct contact.

They also say it can’t be aerosolized. But the question people should be asking is can it be transmitted by someone coughing on you? I think the virus can be suspended in cough particles. They call that direct contact. But I think most Americans would think that’s being aerosolized.

So really, I think that we’ve underplayed the risk of this and then we should be careful. I hope nothing bad happens. I hope we’re going to have only very isolated episodes in the United States. But I also don’t think it’s that unreasonable to suspend commercial flights.

I mean, if you want to visit your son or daughter and you’re coming from Liberia, couldn’t you wait a couple of months? I don’t think that that is something so — of such an immediate necessity that the chance for a worldwide contagion, I think it’s not unreasonable.

Fifteen countries, I think, have suspended flights. I think the temporary suspension of flights should be definitely considered.