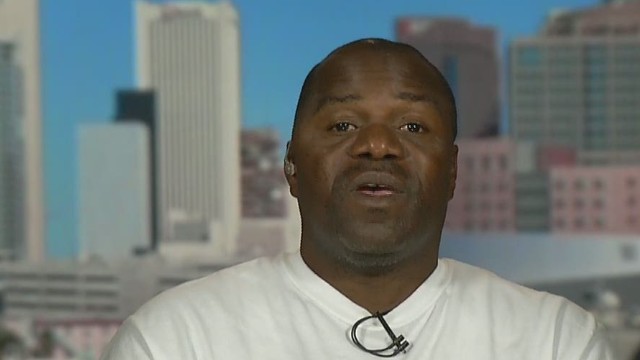 CNN’s Wolf Blitzer spoke with Wilfred Smallwood, half-brother to the Liberian Ebola victim. Highlights from the interview are below and a full program transcript will be posted on http://archives.cnn.com/TRANSCRIPTS/wolf.html.

Mr. Smallwood is joining us now from Phoenix.  Mr. Smallwood, thanks very much for joining us.  First of all, have you been in direct touch with your half-brother?  And if you have been, what are you hearing?  How is he doing?

WILFRED SMALLWOOD, HALF-BROTHER OF EBOLA PATIENT:  Well, as far as we’re concerned, family, after the news of him getting Ebola and then taken to the hospital, we have called the hospital and they would not allow us to talk to him at the hospital.

BLITZER:  He came to Dallas to see his girlfriend, not legally married, but you and he, what, you have the same mother, is that right?

SMALLWOOD:  Eric is my born brother.  We have the same mother.  He was born in 1972 in Liberia.

BLITZER:  This is his first visit, your brother’s, to the United States, right?

SMALLWOOD:  His first visit to the United States, yes.

BLITZER:  And there’s some suspicion, because he had been in contact with a woman, a pregnant woman, in Liberia, Monrovia, just before he boarded that flight for Brussels and then Washington and then Dallas, and this woman had Ebola, that he may have known he potentially could have had Ebola.  He wanted to get out of Liberia and get to the United States for treatment.

You’ve heard that suspicion, to which you say?

SMALLWOOD:  Well, as far as we’re concerned, in Liberia, is a country we help one another.  According to the story, this woman, this pregnant woman was walking and was falling off and then he ran to help her so she can’t drop and hurt herself.  But he never — nobody ever know he had Ebola because Ebola, I think, is in the system, it’s not on the body.

So I think he run to help the person, that’s all.  That’s what all we heard, the information.  He didn’t know the woman, according to the story.  He just helped – she was a pregnant woman.  And what we do in Liberia, our tradition is to help somebody who needs help.

BLITZER:  and he went to help.  The trip that he had to the United States, Mr. Smallwood, do you know if that trip was long-planned or if it was a last-minute decision?

SMALLWOOD:  Well, as far as I’m concerned, it was two weeks to his – I mean, when he got his visa just two weeks before he came, he called and said, oh, I got my visa from the embassy.  The U.S. embassy gave me a visa.  Now I can come there.

So I said, when are you coming?  He said, I may be there next week or week after next, when I get my ticket ready.  We said OK.  We are happy you are coming.  After that, he got some money.  He said OK, I got my ticket already, so I will be there by next week.

And finally he came.  And when he got to Dallas, he call some he already know (ph).  And that was it.  (INAUDIBLE) communicate with him.  Our mother talked to him and we talked to him a lot.  And he was happy here with his family.

BLITZER:  You’ve been in the United States for nine years.  Is it fair to say for the last nine years, you have not seen your brother?  is that right?

SMALLWOOD:  For nine years, I’ve not seen my brother.  We talk on the phone and text messages, that’s all.

BLITZER:  So they can’t leave that apartment.  You’ve heard the news that Anderson Cooper reported.  He spoke with your brother’s girlfriend, who said he had been sick for a while, he was sweating overnight, sweating in the sheets.  He had diarrhea.  Only then did he go to the hospital emergency room, where he was — where he was vomiting.  He had a fever.  They then sent him out.  They said go home, gave him some antibiotics, if you will, some pain medicine, and they just let him go back.

You must be deeply con — your son has been in contact with him.  He’s now being quarantined.  How old is your son?

BLITZER:  What does he say to you?

SMALLWOOD:  OK, when I asked him this morning and yesterday about — before this, before the announcement of Ebola, what happened to your uncle?  He said he been here fine.  We all be OK.  He was even trying to see if he can get a job here.

And then the doctor gave him some medications and said, OK, yes, go home.  And they sent him back home.  When he came home, from Thursday he was OK.  Thursday, Friday, Saturday, and Sunday when he started getting a fever again.  When they looked, he began to start vomiting.  And when went to the bathroom, in the bathroom it was getting the serious. That’s the time they had to call 911 for him.  And there the doctor pronounced he had Ebola.

BLITZER:  How worried are you, Mr. Smallwood, about the potential condition of your 21-year-old son who’s being quarantined inside that apartment which really hasn’t been cleaned up since your half-brother was spending the nights there sweating and potentially leaving some very contagious material in that apartment?

SMALLWOOD:  Well, I think at this issue now, we look to the CDC, who is responsible to get the people out of there and put them on prevention immediate and do the best they can do to that place.  Because we — I’m just hearing from you that this man was in the bedroom sweating and all you’re saying — all we know, the first thing was fever.  He started with fever and went to the hospital and the hospital sent him back home and gave him some medications.  On Sunday is when he started vomiting in the bathroom.  When I asked my son this, my son said he vomited in the bathroom.  He was vomiting in the bathroom and we call 911 for him.  That’s it.

BLITZER:  Yes.  And only now we’re told the CDC is sending medical contractors to that apartment to get those sheets, those pillow cases, remove them, clean up that apartment.  Are you scared about the fate not only of your 21-year-old son but others who are there, including your brother’s girlfriend, and other kids, children who are there?

SMALLWOOD:  Well, yes.  I’m skeptical now because since you describe it this way, everybody is skeptical.  Since it was this way, and we’re hearing the information that he was sweating all along and the house has not been cleaned and they have been quarantined there, that’s a major problem to us, to everybody.  So that worries me now, yes.

BLITZER:  So your brother, obviously, and understandably so, given the spread of Ebola in Liberia, he wanted to get out of there.  And two weeks ago, you say, he got the visa from the U.S. embassy in Monrovia to come to the United States.  And then you say a week later he actually bought the ticket and then he flew to Brussels, to Washington Dulles International Airport, then to Dallas, Texas.

Is it your — I don’t know if you spoke to your brother, but did he ever say to you, I have to get out of here because I’m afraid of Ebola?

SMALLWOOD:  No.  He come — to be fair, he never even said.  I’m happy — oh, I’m coming — my son and my wife helped me, so I’m coming to see them.  I’m coming to be there.  And we know it take him a long time to come and see his family.  So coming to the United States to see the family, he didn’t mention anything Ebola.  He didn’t even mention about any sickness at all.

He just came.  All we know, the family, he’s coming to his wife and his son because they live here. So just regular and normal to visit your family and be with them.  That’s all we feel.

And he was here and happy.  We spoke in love, and talk in love every day.  Hey, OK, you’re here.  Yes, I’m fine. I said I’m trying to find my way and come to see you guys, OK.  I’m coming very soon.  I try to do something.  I’ll come there.  Or maybe you come here too.  But let me get money that you to come to visit me in Phoenix, OK?  We discuss like that.

Unless recently now they said Ebola.  But I don’t think — I don’t think he ever knew he had Ebola.  Because — and the second thing again, coming from Liberia to the United States, you got to go through all the tests.  I think he was tested in Africa too at the same time.  He was tested there and went through the medical test and came to the United States.  And it would surprise me.  If he had been diagnosed for the first time at the hospital and sent him back home with Ebola among the people, so who should be blamed?  Who?  The hospital or — my other concern is how does he get this Ebola?  Is it from here or is it from Africa?  That’s our question right there, because he went to the hospital.