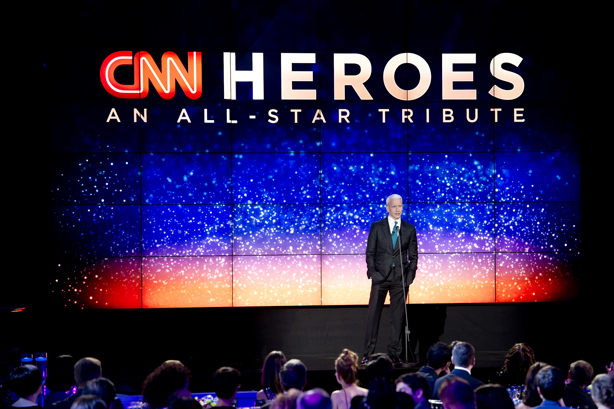 WORLDWIDE VOTING FOR “CNN HERO OF THE YEAR” BEGINS TODAY ON CNNHEROES.COM

CNN, the worldwide leader in news, announced today the Top 10 Heroes of 2014, recognizing everyday people who are changing the world. The network also announced that online voting for the “CNN Hero of the Year” opened today, October 2nd, and will run through Sunday, November 16th, at midnight PT. Voters can log on to CNNHeroes.com to cast ballots for their favorite Top 10 Heroes once a day, every day. Social media users can also share their votes on Facebook and Twitter.

Peabody Award-winning and Emmy-nominated CNN Heroes: An All-Star Tribute will air on Sunday, December 7th, at 8:00pm ET on CNN U.S., and will be simulcast on CNN International and CNN en Español. Hosted by Anderson Cooper, and returning to the iconic American Museum of Natural History in New York City, CNN Heroes: An All-Star Tribute will honor individuals who are making extraordinary contributions to help improve the lives of others.  Since its inception, CNN Heroes has received tens of thousands of submissions from more than 100 countries and profiled over 200heroes.

“It has been CNN’s great honor for the past eight years to shine a spotlight on these remarkable individuals who are making a difference in their communities and the world,” said Jeff Zucker, President of CNN Worldwide. “We are proud to provide a platform for these heroes to share their stories and their important work with our global audiences.”

Each of the Top 10 CNN Heroes will receive a $25,000 grant, and one of the honorees, after global voting, will be named the CNN Hero of the Year, receiving an additional $100,000 grant to further aid their cause. Voting can be done at www.CNNHeroes.com and through the CNN app. Voters will also be able to view the honorees’ profiles on the site.

This year, CNN continues its collaboration with the Annenberg Foundation, a leading supporter of nonprofits worldwide. As part of the prize package, the Annenberg Foundation will provide all of the 2014 Top 10 Heroes free organizational training through a customized version of the Annenberg Alchemy program.  Alchemy offers practical guidance for nonprofit leaders in fundraising, communications, management of volunteers and strategies to build and keep a strong board of directors.

CNN’s Kelly Flynn is the creator and senior executive producer of the CNN Heroes initiative and CNN Heroes: An All-Star Tribute. Said Flynn, “I am thrilled that we are returning this year to the legendary American Museum of Natural History and that, after eight years, we continue to bring attention to these amazing people and their very important work.  All of us at CNN are humbled and heartened by the difference these Heroes are making.”

For the latest information about the Top 10 CNN Heroes, viewers and online users are encouraged to visit CNN Heroes on Facebook, follow @CNNHeroes on Twitter and use the hashtag #CNNHeroes. Additionally, behind-the-scenes CNN Heroes images can be viewed on CNN Heroes’ Instagram account.

The Annenberg Foundation is a family foundation that provides funding and support to nonprofit organizations in the United States and globally. Since 1989, it has generously funded programs in education and youth development; arts, culture and humanities; civic and community life; health and human services; and animal services and the environment. In addition, the Foundation and its Board of Directors are directly involved in the community with several projects that expand and complement its grant support to nonprofits.  Among them are Annenberg Alchemy, Learner.org, Annenberg Space for Photography, Explore, GRoW and the Metabolic Studio.  The Annenberg Foundation exists to advance public well-being through improved communication. As the principal means of achieving this goal, the Foundation encourages the development of more effective ways to share ideas and knowledge.

CNN Worldwide, a division of Turner Broadcasting System, Inc., a Time Warner Company, is the most trusted source for news and information. Its reach extends to nine cable and satellite television networks; one private place-based network; two radio networks; wireless devices around the world; CNN Digital Network, the No. 1 network of news Web sites in the United States; CNN Newsource, the world’s most extensively syndicated news service; and strategic international partnerships within both television and the digital media. For more information, visit www.CNNPressroom.com.