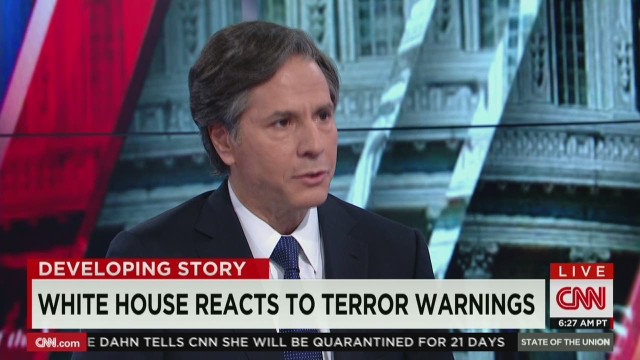 White House Deputy NatSec Advisor on State of the Union

Today on CNN’s State of the Union with Candy Crowley, Tony Blinken, White House Deputy National Security Advisor sits down with Candy Crowley to discuss U.S. security in the face of terrorism. As air strikes increase and a moderate coalition forms, the U.S. ramps up the fight against ISIS.  Crowley gets the White House reaction from Blinken.

Blinken on U.S. efforts in the Middle East: “What we are doing is empowering local actors with some of the huge assets we can bring to this, like our airpower, intelligence, training and equipping, advising and assisting. And we’re not falling into the al Qaeda trap of sending tens of thousands of Americans in, where they get bogged down, tied down, and bled, which is exactly what al Qaeda wants. We’re being smart about this. This is a sustainable way to get at the terrorists. And it’s also a more effective way.”

Blinken on sending U.S. troops to West Africa for Ebola: “The military can play a unique role in logistics, in organizing everything, in setting up a transit area outside of the immediate area of Ebola in Senegal to move equipment and people in, it’s building treatment units, it’s setting up an air bridge.”

THIS IS A RUSH FDCH TRANSCRIPT. THIS COPY MAY NOT BE IN ITS FINAL FORM AND MAY BE UPDATED.
CROWLEY: I’m joined now by Tony Blinken, White House deputy security national security adviser. I wanted to ask you first about the warnings that the FBI and DHS, Homeland Security, put out this week to local law enforcement, said, be on the lookout, because the more we do over here, this may activate lone wolves, you know, those people acting alone, but inspired by what’s going on.

It occurred to me, first of all, duh. But, second of all, what is the purpose of doing that? Because it looks like, let’s just cover our bases here. If something happens, we will have warned people, because what can they do?

CROWLEY: Which is my point, I think.

BLINKEN: But, second, it’s important for people to be vigilant, to have a heightened awareness, and to be able to communicate with law enforcement if they see anything suspicious. That’s a critical tool to in making sure that we can prevent and protect ourselves.

CROWLEY: So, it occurred to me this weekend, someone — I was out of town, and someone, when they heard this bulletin, said, OK, so, this week, we have a guy leaping over the White House fence, the most secure building, one would hope, in the United States of America, and makes it all the way inside the White House, and then they’re telling us, hey, be careful. Lone wolves might want to, you know, slit your throat or blow up — it just seems like there is no real way and no real helpful advice that’s being given to the public.

BLINKEN: No, Candy, look, I think this has to be — and it is — a comprehensive effort across the entire government, and, indeed, as necessary, involving the American public.

But, again, this is just to make sure that people have heightened awareness. No credible active plots.

But it’s very important, as we take action around the world, including in Iraq and Syria, that people are aware and focused.

CROWLEY: And does it — moving to the region now and what’s going on there, airstrikes now along the Turkish/Syrian border, it does seem that, very often, when any kind of Western power, particularly in the Middle East, takes on some kind of military operation, that it creates enemies, as well as destroys other enemies.

And isn’t that what — what those bulletins are about, is, are we making things more dangerous on the streets by doing this or safer?

BLINKEN: Candy, we have to get ahead of this problem.

ISIL presents an immediate threat to people in the region, including to Americans in the region. And it’s been very clear that, over time, if it’s left unchecked, it will present a threat here at home and to our partners in Europe. So we need to get ahead of it. An ounce of prevention is better than a pound of cure.

But keep in mind, we’re doing this in a very different way than in the past. We’re not sending in hundreds of thousands of American troops. We’re not spending trillions of American dollars. What we are doing is empowering local actors with some of the huge assets we can bring to this, like our airpower, intelligence, training and equipping, advising and assisting.

And we’re not falling into the al Qaeda trap of sending tens of thousands of Americans in, where they get bogged down, tied down, and bled, which is exactly what al Qaeda wants. We’re being smart about this. This is a sustainable way to get at the terrorists. And it’s also a more effective way.

BLINKEN: Yes, but look at who is doing it.

We took action in Syria this week with five Arab nations flying with us. We have a coalition now of more than 50 countries from all around the world, including in the region. This is not America against ISIL. This is the international community against a threat that is posed in the first and foremost to countries in the region, but represents a threat to everyone.

CROWLEY: One of the things that our previous guests talked about a lot was Syria being the real linchpin here, that, when you look at it, the one thing that could break apart this coalition is the different feelings about what to do about Syria.

Is there right now a line of demarcation, someplace in Syria beyond which U.S. planes would not go? And vis-a-vis the U.S. and Syria, what are you telling these rebels in terms of, here’s what we want do with your leader, because that’s their main target really?

BLINKEN: Candy, you know, Assad has been a magnet for the very extremism we’re now fighting against.

BLINKEN: We have been very clear that there needs to be a transition in Syria, that as long as Assad is there, it’s very hard to see Syria being stable, and he will continue to be a magnet for the extremists that we’re fighting.

CROWLEY: But a transition is not the same as, we will actively help you bring this guy down.

BLINKEN: The best way to deal with Assad is to transition him out so that the moderate opposition can fill the vacuum.

That’s what we have been working on. The more you build them up, the more you make them a counterweight, the more possible that becomes.

CROWLEY: I want to ask you about one of the things that has — that has appeared in the paper this morning about White House and Secret Service protection.

In it, it talks about an incident 2011 where a gunman opened fire on the White House. It took four days for the Secret Service to realize it actually was against the White House.

Are you aware of that incident? And what actions were taken to secure it? Because these bullets hit in the residence, as you know.

BLINKEN: So, Candy, first, let’s put this in perspective.

You know, I know the Secret Service, the men and women of the Secret Service put their lives on the line for the president of the United States, his family, and folks working in the White House every single day, 24 hours a day.

Their task is incredible, and the burden that they bear is incredible. Director Pierson has been looking at this incident. And then what we saw last week, she reported to the president on Thursday evening when he got back from New York. The secret service is investigating this and they will take any steps necessary to correct any deficiency.

BLINKEN: Well, again, I’ve seen the reports. I saw the reporting in the newspapers this is morning. I know the secret service is on top of this and they will take every necessary step to correct any problems.

CROWLEY: And finally because we have – we have some folks you are coming back from the frontlines in the battle against Ebola, an American doctor, someone who is an expert in viral diseases.

The troops that the U.S. are sending to West Africa, what is their primary duty? How do they stay out of an area that is so rife with — how do they steer clear of getting Ebola themselves?

BLINKEN: So Candy, this is a major effort.

This crisis is something that we haven’t seen before. The president, we were in this from day one, when we saw the first cases of Ebola breakout back in March and we had the CDC — a large CDC mission in there, $175 million, but it quickly became clear that this was taking on a much larger scale and scope. And so the president wanted to make sure that we were doing everything possible.

The military can play a unique role in logistics, in organizing everything, in setting up a transit area outside of the immediate area of Ebola in Senegal to move equipment and people in, it’s building treatment units, it’s setting up an air bridge. These are all the kinds of things that our military is uniquely placed to do. And what we’re also doing as a result of that is leveraging. Many more countries to come in, including on the ground and also with resources to try and get ahead of this problem.

CROWLEY: So they’re saying outside the infected zone at the moment, although as we know that it has expanded and building hospitals or (INAUDIBLE)…

CROWLEY: …setting up. And so you are confident that this is not a danger to those soldiers?

BLINKEN: Look, anyone who is in the area of Ebola, we have to take all of the precautions necessary, doctors, nurses have to be well protected and indeed we have the means to do that. We know how to do this. Every Ebola outbreak in the last 40 years we’ve managed to stop. We’ll stop this one.

CROWLEY: Tony Blinken, thank you so much for coming by. Appreciate it.