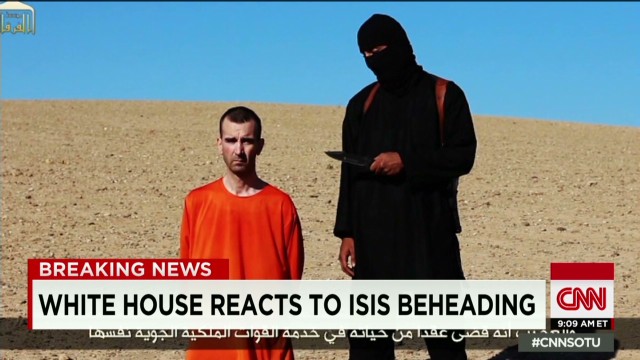 Today on CNN’s State of the Union with Candy Crowley, White House Chief of Staff Denis McDonough speaks to Crowley about the fight against ISIS and efforts to build an international coalition.

McDonough on combating ISIS: “the United States, with this coalition effort, Muslim states, Sunni states, part of that effort will, ultimately, not only degrade this capability with ISIL, but destroy ISIL itself, because it really stands for nothing.”

McDonough on aiding Iraqi and Syrian forces “we’re using our unique capabilities, airpower, intelligence surveillance, reconnaissance, and our training ability to make sure that Iraqi forces on one side and Syrian opposition forces on the other side of the border can take the fight to ISIL.”

THIS IS A RUSH FDCH TRANSCRIPT. THIS COPY MAY NOT BE IN ITS FINAL FORM AND MAY BE UPDATED.
CROWLEY: With me now is White House Chief of Staff Denis McDonough.

Thanks for joining us this morning.

MCDONOUGH: Thanks for having me, Candy.

MCDONOUGH: Well, they’re trying to communicate any number of things, I have to imagine.

But this is what we are going to do, which is we are going to mobilize an international coalition to take this fight to ISIL, to degrade and to ultimately destroy them. That will be a coalition that includes not only our friends in Europe and Asia, but also our partners in the region, Muslim states, Sunni states, working with us to make sure that we make this a multinational effort that’s one coalition.

Two, we’re going to make sure that we’re using our unique capabilities, airpower, intelligence surveillance, reconnaissance, and our training ability to make sure that Iraqi forces on one side and Syrian opposition forces on the other side of the border can take the fight to ISIL.

CROWLEY: Do you think they should be together…

MCDONOUGH: And then we’re also going to make sure that we’re keeping the heat on them, so that the foreign fighters that are going there and want to come home can’t do that and pose a threat to the Americans.

CROWLEY: When you talk about — since you bring up coalition help and a big coalition, number one, has — in any of the conversations that the president has had, Secretary Kerry has had, others have had, has there been a country that has said, we will put combat troops on the ground?

MCDONOUGH: I’m not going to front-run any announcements from any countries or from Secretary Kerry, who is in the region, or from John Allen, who the president will be…

CROWLEY: Right. You don’t need to name specifics. I just mean, has anyone said, yes, we will put…

MCDONOUGH: Again, again, I’m not going to front-run any announcements.

But the president will be sitting down with John Allen on Tuesday morning. Secretary Kerry is continuing to work this in the region. He will be testifying in Congress this week. And we will make sure that we build a coalition that is durable, that is sustainable, and that is focused on the fundamental goal of this effort, which is to degrade and ultimately destroy ISIL.

CROWLEY: Do you need troops on the ground other than Syrian rebels that you can vet and then train and arm and Iraqi troops and Peshmerga?

MCDONOUGH: Ultimately, to destroy ISIL, we do need to have a force, an anvil against which they will be pushed, ideally Sunni forces.

We will do the same side on the Iraqi border with the Iraqis, but, ultimately, Candy, we can bring airpower to bear on this. We can bring ISR and we can bring training capability. It’s going to be Iraqi and other boots on the ground that are bringing this fight to ISIL, ultimately, though, to destroy them.

CROWLEY: So, you will need a — and Sunni forces could include forces from many other countries in that region, because there are — obviously, Saudi Arabia, others could put forces on the ground?

MCDONOUGH: The main thing I want to focus on today, because of the importance of this vote — these votes this week in Congress, is the focus on the Syrian opposition.

The Syrian opposition wants to fight. This is their fight. And we should facilitate them to do that.

CROWLEY: And just last month, the president was talking I think to Tom Friedman, and sort of described Syrian rebels as, you know, former doctors and pharmacists, and sort of — and said it was a myth, a fairy tale — I believed he used the word fairy tale — it was a fairy tale that we could ever arm them and put them up against a Russian-backed Syrian government.

Why are they now trainable and able to push back against what everyone has said is the most brutal fighting force America has ever faced?

And what’s most important here is that the Syrian opposition on the ground fighting ISIL can count on American and coalition airpower to supercharge their effort. That’s important and that’s ultimately going to be what is called for in this strategy.

CROWLEY: What about blowback, which is the other thing that people are worried about? U.S. force used in the Middle East has always seemed to arouse and radicalize other people, that there may be a chance here that, while trying to destroy ISIS, you create other terrorists that come in and take up the fight, that you will make more enemies than you will kill?

MCDONOUGH: Look, our strategy needs to be carried out in a disciplined, thoughtful fashion. That’s exactly what we will do.

That’s also why it calls for a coalition to include our Muslim partners from the region involved in this fight, because this fight is as much theirs as it is ours. This is a fight within Islam, within Sunni Islam. And they want to make sure that they do this.

But I want to just be clear about one thing. We have been reminded again this morning of their inhumanity, of their depravity, of their barbarity. And the fact that we somehow could have made them more so is faulty. When you’re confronted with evil, sometimes, you have to confront it.

CROWLEY: Absolutely. What I’m talking about is others who have yet to join the fight, that, in fact, the U.S. presence has always been a selling point for radicals.

MCDONOUGH: That’s why, again, we’re going to carry this strategy out in a very disciplined fashion.

CROWLEY: Which is why I keep asking if we can expect that they will put troops on the ground, that these — that, throughout the Middle East, there are people who have more at stake in this fight than the U.S. does?

MCDONOUGH: That’s right, but we have a lot at stake in this fight, which is why the president’s made the decision he’s made, is working and consulting with Congress to do this and is working with our allies to make sure that we have a durable, sustainable coalition.

CROWLEY: Confident that you can vet these rebels in Syria, to the extent that you know they’re not going to take the weaponry and use it against the U.S.?

MCDONOUGH: We have been putting this plan together now for some time. We submitted it to Congress earlier — late this spring, earlier this year. So we have taken this very seriously. And we believe we’re ready to go with it. And that’s why this vote this week is so important.

CROWLEY: Can you stage this war or this military action or this counterterrorism plan, whatever you want to call it, without American blood being spilled?

MCDONOUGH: The president said on Wednesday night in his address to the nation that any time our people are in harm’s way, are in an effort like this, there’s inherent risk in that.

That’s why he has approached this decision with the prudence and the discernment that he has done. And as he said to many people over the course of these last many weeks, he will never apologize for being discerning and careful as he is preparing an effort that will put our troops in harm’s way. CROWLEY: You must believe — I think when I saw this — I did not see the whole thing, but when I saw news of another beheading, that we’re now sending another 400 U.S. military personnel into Iraq to help train and figure things out, hopefully stay out of combat, that there has to be a movement within ISIS to grab an American soldier and do the exact same thing they have been doing.

CROWLEY: Is that a concern?

MCDONOUGH: ISIL will do anything it can to strike terror and fear into its opponents, but, ultimately, that’s why we’re going to beat them.

They stand for nothing but what they can destroy, not for anything that they can build. That’s exactly what Prime Minister Cameron was saying this morning. And that’s why, ultimately, the United States, with this coalition effort, Muslim states, Sunni states, part of that effort will, ultimately, not only degrade this capability with ISIL, but destroy ISIL itself, because it really stands for nothing.

CROWLEY: White House Chief of Staff Denis McDonough, thanks for coming by.

MCDONOUGH: Thanks for having me, Candy.