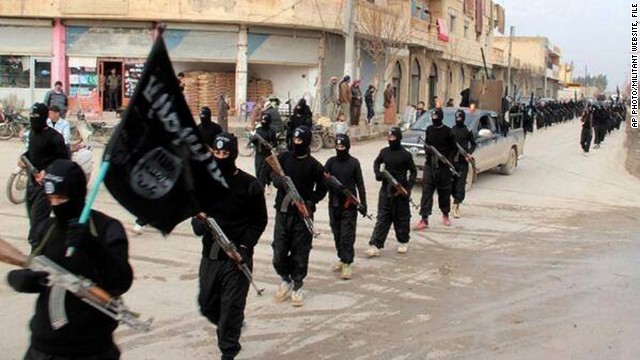 In an interview with CNN’s Hala Gorani, Syrian official Bouthaina Shaaban says Syria is ready to work with the U.S., but warns against any “act of aggression” by the U.S.

“We are ready to be part of any coalition against terrorism, and any strike on Syria without coordination with the Syrian government is considered an aggression against Syria.”

Shaaban, who is the political and media adviser to Syrian President Bashar al-Assad, also says Obama’s strategy against ISIS has “many loopholes” and “leaves a lot to be desired.”

“The strategy that I read by Obama has many loopholes and leaves a lot to be desired. He would benefit a lot from cooperating with the Syrian government against terrorism because we have been truly fighting terrorism for the last four years. The four points he outlined as his strategy will not work simply because they are not based on reality.” Thanks for being with us.

First of all, I want to ask you for your reaction to what the U.S. president has said, essentially saying airstrikes in Syria are a real possibility. What happens if America sends fighter jets in Syria without coordination with your government? What would then the response be from the government of the president there

BOUTHAINA SHAABAN, POLITICAL AND MEDIA ADVISER TO SYRIAN PRESIDENT: Well, our foreign minister has said in a press conference that, A, we are ready to be part of any coalition against terrorism. B, any strike on Syria without coordination with the Syrian government is considered an aggression against Syria. And today, also, Moscow has said exactly the same thing and China. And I think, you know, if we have time, I will say to you how important this is for fighting terrorism to coordinate with people who have been fighting terrorism for the last 40 years, not only ISIL, by the way, but those who are called opposition or moderate opposition.

SHAABAN: — to carry on with what he…

GORANI: — and Bouthaina Shaaban, people will really disagree with you on sort of putting together in the same group ISIS and other — the FSA, for instance.

But let me ask you a precise question and I would like a precise answer, if it’s at all possible here.

Would the Syrian government then, if it considers this an aggression, shoot it down?

But I’m saying, if the objective of President Obama is to fight terrorism, not only ISIL and not to contain ISIL and not just to reduce ISIL, but to fight terrorism, he have to coordinate his efforts with all Security Council members who voted for 2170 and with people on the ground and with people who have been victims of terrorism for the last four years and not just to coordinate with people who have been financing, arming and facilitating terrorism into Syria.

GORANI: So there — is it that you don’t know how the government would react?

It does have anti-aircraft weaponry, after all?

Or is it that no decision has been made with regards to a possible U.S. air strike campaign in Syrian air space?

SHAABAN: Well, as I said, our foreign minister has made it very clear that we are ready to cooperate, but if any strike is done without our cooperation, we will consider it an aggression.

SHAABAN: I’m — I don’t know. I think — I’m — I’m talking about our government. But I’m saying that our government will decide at the time what it’s going to do.

But the natural thing, the normal thing in fighting terrorism and if the U.S. wants to benefit from the mistakes of the past in Afghanistan and in Iraq, it not only should announce no boots on the ground, but it should review the ways to address terrorism in these countries and, you know, the strategy that I read by Obama really has many loopholes and it’s — it leaves a lot to be desired.

And he will benefit a lot from cooperating with the Syrian government against terrorism, because we have been truly fighting terrorism for the last four years.

GORANI: So have there been any discussions at all on any level, to your knowledge, on any kind of coordination with regards to mounting the…

SHAABAN: Not to my knowledge.

SHAABAN: Not to my knowledge.

GORANI: — and to your knowledge, a response from the Syrian government is — is not known at — at this current stage if, indeed, U.S. fighter jets fly into Syrian air space?

SHAABAN: I — as I said, I am not a military person, I am a political (INAUDIBLE), the adviser. Even if there is a decision or discussion, I wouldn’t be part of it, so I can’t answer that question, unfortunately.

GORANI: Well, you are a political and media adviser to the president, who, for years now, has been accused of bombing his own people. We’re seeing video that’s barely three days old from Duma, where you have regime bombs fall on civilian neighborhoods and children and civilians killed and injured.

Why is this still, Bouthaina Shaaban, being done by the Syrian regime against civilians?

And what is circulated in the Western media is very, very far removed from the truth, unfortunately..

GORANI: But you (INAUDIBLE)…

GORANI: And you deny that this…

GORANI: — comes from the regime still, to this day?

SHAABAN: Of course. You know, not only I deny, an American think-tank has conducted an investigation and it published a paper saying this was not done by the Syrian regime. Unfortunately, the Western media only takes what, again, is the Syrian government, but it does not follow up on the attacks to correct the mistakes that it has been doing.

GORANI: — what — what blame, then, does the Syrian government have in all of this, the — the hundreds of thousands of killed, the millions displaced and made refugees?

So I think the West, you know, should take its responsibility for encouraging and allowing these people to exercise terrorism on the Syrian people for the last four years. I think Western governments should get real, should come to Syria, should see the truth and then should address the issues.

GORANI: Well, look, you mentioned Moscow saying that any U.S. air strikes would be considered an act of aggression.

Do you know if there have been conversations between the president, his leadership, and Moscow regarding what the U.S. intends to do in Syria against ISIS?

And if so, what has been discussed?

SHAABAN: You know, you know, most — the Russian Federation is a friendly country and we have many channels of communication with Russia — with Russia. So we — we — we are in touch with the Russians. We speak to the Russians. We talk to them about many issues. And so it’s not the place here to say how and who is talking to whom.

Can you send a message directly from Bashar al-Assad to the U.S. government, to the U.S. president, what would it be?

SHAABAN: Well, I — I will send a message saying that the four points he outlined as a strategy will not work simply because they are not based on the reality. You know, I will give you one example. He said we should not allow these communities of minorities to be driven out of their homes.

GORANI: Bouthaina Shaaban, an adviser to the Syrian president, Bashar al-Assad, joining us from Damascus

Thanks very much for being on CNN this everything.

SHAABAN: Thank you very much.