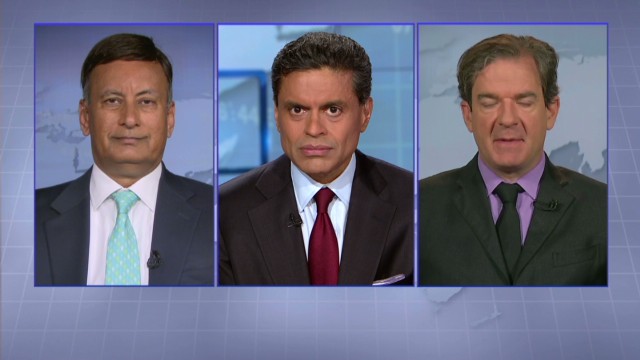 CNN’s FAREED ZAKARIA GPS features an interview with CNN national security analyst, Peter Bergen, and Former Pakistan Ambassador to the US, Husain Haqqani, on the political protests in Pakistan. Over the past week, protests in Pakistan have erupted in opposition to Prime Minister Nawaz Sharif.  While the focus has been on the protesters outside of Pakistan’s parliament in Islamabad, the all-powerful military may still wield the real power in Pakistan.

Peter Bergen on the protests in Pakistan: “we are certainly seeing something that is indicative of how weakened the democratic institutions of Pakistan have become.”

Ambassador Haqqani on the military’s disapproval of Prime Minister Sharif : “the possibility of the military orchestrating these protests cannot be ruled out.”

Ambassador Haqqani on Pakistan’s support of the Taliban: “Whether the Pakistani military supports them or not, the fact remains that the Pakistani military has not done anything so far to stop the Taliban, Afghan Taliban, from remaining a significant factor in Afghanistan. So when the Taliban do make a play, Pakistan will definitely be drawn in. And it’s unlikely that Pakistan will clamp down on the Afghan Taliban.”

FAREED ZAKARIA, HOST: Protests like these have rocked Pakistan over the last three weeks. The rallying cause for this angry mob is opposition to the Prime Minister Nawaz Sharif.

The protesters, who have been camping outside the nation’s parliament in Islamabad, want Sharif to go. Sharif says he’s not going anywhere. The key player to keep an eye on, of course, is the all-powerful military that wields the real power in that country.

Whom do they support and how unstable will things get in this nuclear nation?

Let’s see if we can get some answers.

Husain Haqqani is Pakistan’s former ambassador to the United States.

And Peter Bergen is director of the National Security Studies Program at The New America Foundation and also CNN’s national security analyst.

Peter, let me start with you. Paint the scene for us. What exactly is going on in Pakistan?

PETER BERGEN, CNN NATIONAL SECURITY ANALYST: Well, I mean we’ve seen this movie before sometimes, Fareed, where we’ve seen massive street protests and, you know, the most recent big example of that was in 2007, when, essentially, you know, the lawyers movement allied with popular support eventually unseated General Musharraf.

ZAKARIA: Husain, take us behind the scenes.

What is — what is going on here? What — what kind of a power play are we watching?

HUSAIN HAQQANI, FORMER PAKISTAN AMBASSADOR TO THE UNITED STATES: Fareed, we must understand that these protests and the turmoil they have generated is just the symptom of a deeper, deeper disease. The disease is that Pakistan’s military has ruled Pakistan for more than half its life as an independent country. And in the other half, when civilians are allowed to govern, the military wants control of foreign policy and security policy.

Right now, the military is also upset with Prime Minister Sharif because it’s — he’s trying to put on trial a former military chief and a coup maker, General Pervez Musharraf. So the possibility of the military orchestrating these protests cannot be ruled out.

ZAKARIA: And what seems to be happening, Peter, is that the Pakistani military, following Husain’s line of argument, the Pakistani military is upset with Nawaz Sharif because he wants to put Musharraf on trial. He’s trying to make peace with India, or at least improve relations with India. This was what he was trying to do the last time he was prime minister, which was when he was ousted in a military coup by none other than Pervez Musharraf.

So this is a strange story, you know, of what — what goes around comes around.

And there’s one other issue, Fareed, that in yo — in the laundry list of kind of disputes between the military and the civilian government, which I think is important, is the fact that the military, for the first time in its — in its history, has taken a much more enthusiastic role in fighting the Taliban in the tribal areas of Pakistan, something the U.S. has been demanding for a long time and is actually happening.

And ironically, it’s a civilian government, the Nawaz Sharif government that has sort of been a bit on the fence on this issue.

But that doesn’t necessarily mean that they are, you know, about to launch a coup.

ZAKARIA: Peter, into this mix has entered Ayman Zawahiri, who — the head of al Qaeda – who now says he is going to try to open a chapter or a franchise or however one puts it on the Indian subcontinent.

What do you, you know, what does all this mean?

Why is Zawahiri doing this?

BERGEN: Fareed, I think it’s bloviation and hyperventilation, the idea that, you know, Zawahiri is going to open a branch of al Qaeda in India is just crazy. I mean, yes, there are some jihadi elements in India, but there’s no evidence that al Qaeda has — al Qaeda has a presence in India. And, really, it’s an attempt by — by Zawahiri to have people like us discuss him, because he’s been out of the limelight for so long, it’s all been about ISIS in Iraq and Syria and al Qaeda is very conscious that they’re yesterday’s story.

And if you look at the tape that they showed of Zawahiri, it’s — it’s so boring. It’s him talking in a monologue that goes on for more than half an hour.

And then you look at what ISIS is doing on video, which is very exciting, well-edited, with music and, uh, you know, you can see why this is an — ISIS is a much more appealing media strategy, apart — apart from the fact that also they are being much more successful than al Qaeda has ever been in its history in terms of getting territory, money, fighters and actually establishing a large foothold in the Middle East.

ZAKARIA: Husain, what about this — the issue of what happens once American troops draw down?

Because as that happens, the Taliban is clearly going to make some kind of play for power in Afghanistan, the Afghan Taliban. And historically, they have been supported by the Pakistani military. Do you believe that will happen again?

HAQQANI: Whether the Pakistani military supports them or not, the fact remains that the Pakistani military has not done anything so far to stop the Taliban, Afghan Taliban, from remaining a significant factor in Afghanistan. So when the Taliban do make a play, Pakistan will definitely be drawn in. And it’s unlikely that Pakistan will clamp down on the Afghan Taliban.

In fact, I think that Zawahiri’s attempt to talk about India is essentially to try and get the hard line elements among Pakistani jihadis and even within the Pakistani intelligence service, to think about al Qaeda as a potential ally. That’s his play.

Um, I don’t think he will get much traction. But basically what he’s trying to do is to appeal to the anti-Indian sentiment that is present in Pakistan on any given day and hoping to get recruits for his cause.

So I think we will see problems in Afghanistan and we will continue to see problems in Pakistan. I just wish that the Sharif government would have been able to reach out to India to make peace with it, and, at the same time, to try and get Pakistan out of Afghanistan because the best future for Afghanistan would be one that the Afghans determine without the meddling of Pakistan or of other foreign actors, including al Qaeda. So I think we are not looking to a very positive future in that region.

ZAKARIA: Fascinating insights on a very complicated subject. Thank you, gentlemen, both.