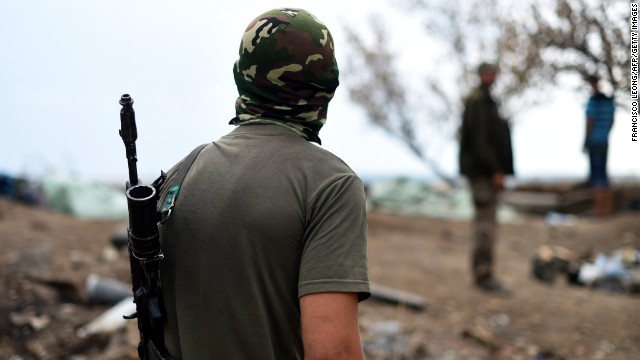 Senator Menendez on CNN’s State of the Union: Russia in Ukraine “is clearly an invasion”

Today on CNN’s State of the Union with Candy Crowley, Senator Robert Menendez spoke to Candy about Russia’s presence in the Ukraine and the proper response to President Putin. Text highlights and a transcript of the discussion are below.

Senator Menendez on Russia’s presence in the Ukraine: “Thousands of Russian troops are here with tanks, missiles, heavy artillery, and are directly engaged in what is clearly an invasion.”

A full transcript is available after the jump.

CROWLEY: Joining me now from Kiev is Senator Robert Menendez. He’s chairman of the House Foreign Relations Committee, obviously on a fact-finding mission in Ukraine. Senator, first, thank you for joining us.

MENENDEZ: Yes, this is a watershed moment, Candy.

Thousands of Russian troops are here with tanks, missiles, heavy artillery, and are directly engaged in what is clearly an invasion.

CROWLEY: So, it is a watershed moment. And I — just to review the bidding for our audience, we started out with some travel bans on individuals, freezing assets on some — some of the elite in Russia, kind of moved to companies and some sanctions there. Then we went to sectors of the economy.

We now have a Russian economy that looks like it’s headed towards a recession and a Putin who is more popular than ever. Nothing has moved him. What’s the next step?

MENENDEZ: Well, I think Putin has sized up the Western and figured that the most difficult sanctions against Russia and the arms necessary for the Ukrainians to be able to defend themselves is not coming from the West.

CROWLEY: Let me ask you about this, as you well know the president has not wanted to provide lethal weapons to Ukraine. He said, obviously, time after time this is not going to be solved in a military way.

Now, I think Russia probably thinks it can be solved in a military way. What do you think of the president’s rationale right now for withholding weaponry and by that I mean lethal weaponry to Ukraine and can it stand?

MENENDEZ: Well, I think that was his initial assessment. And there are those in Europe and elsewhere who says, you know, we don’t want to provoke Putin. Well, Putin doesn’t need provocation. In this case weakness is a greater provocation for Putin act than strike.

And Putin only understands two things and that’s strength either because of the economic consequences that we can levy upon Russia and hopefully the European Union will move with us into more significant sectoral sanctions. And also the costs to Russians as they send their sons and daughters back in body bags to Russia and Russian mothers say, what is happening here?

And that will come if the Ukrainians have the wherewithal — they are more than willing to fight and they’ve showed a tremendous resilience. They’ve also showed a lot of restraint but it’s at a point where a — Russia has come, invaded with thousands of troops, with missiles, with tanks. This is no longer the question of some rebel separatists, this is a direct invasion by Russia. And we must recognize it as that. When I read the headlines back at home that suggests rebels are advancing in different parts of eastern Ukraine it’s not rebels it’s Russian soldiers.

CROWLEY: And so, you want the president, the U.S. to — and other countries, I assume, to provide lethal weaponry to Ukraine. Do you have any reason to believe that the Obama administration will do that?

MENENDEZ: Well, I think that may be very well on the table right now. There’s ability to consider that these are changed circumstances.

Look, Russia violated the international order that we had invited it to since the Cold War, a whole effort was to get Russia and other countries to observe that you don’t solve disputes by invading another country, taking over their territory, and annexing them. Russia has violated that. So, it seems to me that this is a test from my perspective, Putin has a war against Europe being fought on Ukrainian territory. Because everything that he despises about Europe is what he’s concerned about Ukraine moving towards.

These are consequences that flow even far beyond the conflict that is taking place here. And that’s what we have to think about in terms of our national interest security to preserve an international order that ultimately observes the rule of law and doesn’t ultimately violate it by invasions and territorial annexation.

CROWLEY: So, Senator, if I’m hearing you correctly you say the circumstances have changed. Russia is now at war in Ukraine. And the U.S. has to — and the Obama administration has to change its approach to arming the Ukrainian army.

MENENDEZ: I think the European Union, NATO, as well as the United States has to consider this is dramatically different and we have to give the Ukrainians the fighting chance to defend themselves. I’m not suggesting U.S. troops here or NATO troops here…

MENENDEZ: …but I am suggesting that the Ukrainians have the wherewithal to fight for themselves.

CROWLEY: Senator Bob Menendez, in Kiev for us today. He is of course the chairman of the senate Foreign Relations Committee. Thank you so much, Senator.