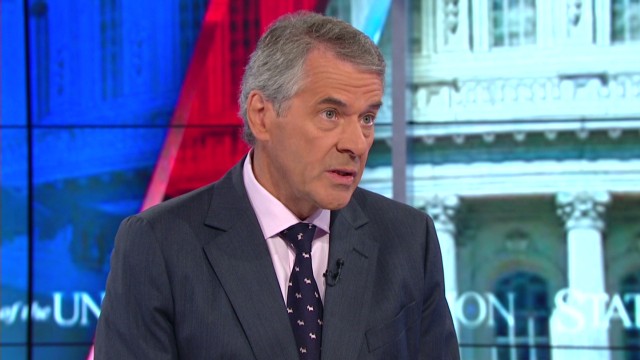 Britain’s Ambassador to the U.S. Peter Westmacott on CNN’s State of the Union “we are close” to identifying Foley’s killer.

Today on CNN’s State of the Union with Candy Crowley, British Ambassador to the US Sir Peter Westmacott spoke to Crowley about the alarming numbers of Westerners fighting in Iraq and Syria.  In light of the revelation that James Foley’s executioner had a British accent, the British government has taken measures to identify the ISIS militant.

Ambassador Westmacott on identifying James Foley’s executioner: “I do know from my colleagues at home that we are close.”

Ambassador Westmacott on jihadists from the West: “People think that maybe as many as 500 British subjects have gone to Syria and Iraq for this cause of jihad. And it’s not a problem exclusive to the United Kingdom. We have got people from lots and lots of Western democracies who, unfortunately, are misguided enough to go to that part of the region and take up a cause which is a betrayal of all our values.”

Ambassador Westmacott on providing lethal assistance to opposition: “what has happened in Iraq and the way in which ISIS has scooped up weapons and money and other support which has been provided initially for the purpose of getting rid of Bashar al-Assad is an indication that that caution shown by my government and the United States government was perhaps well-founded.”

CROWLEY: Joining me now is Sir Peter Westmacott, the British ambassador to the United States. Mr. Ambassador, thank you for coming off vacation, for many reasons, a busy world at this point and a sad one. What do you know about this terrorist who took the life of James Foley?

PETER WESTMACOTT, BRITISH AMBASSADOR TO THE UNITED STATES: I see that the British media this morning are speculating that we are very close to identifying who this guy is.

And you may have seen that my secretary, Philip Hammond, said yesterday that we’re putting out a great deal of resource into identifying this person. I think we’re not far away from that. We’re putting a lot into it. And there are some very sophisticated technologies, voice identification and so on, which people can use to check who these people are. But, of course, the problem goes beyond one horrendous criminal, if you like.

We have got more people than we would like. People think that maybe as many as 500 British subjects have gone to Syria and Iraq for this cause of jihad. And it’s not a problem exclusive to the United Kingdom. We have got people from lots and lots of Western democracies who, unfortunately, are misguided enough to go to that part of the region and take up a cause which is a betrayal of all our values.

CROWLEY: Let me see if I can just understand, just back to the suspect at this point.

We also read in the British newspapers several names. Are those names on target as far as Scotland Yard is concerned? And when you say close, are — do you have a name and you think that’s who it is and they’re doing the final check? Where are you in this?

WESTMACOTT: I can’t say more than this, Candy, at the moment, but I do know from my colleagues at home that we are close.

But forgive me if I can’t go much further than that at this point.

But, of course, we had — initially, the whole jihad thing began with the mujahideen in Afghanistan. We have had issues of al Qaeda and Taliban in Pakistan. We have now got people in Iraq and Syria. They have moved around from many different countries.

But I think that all different Western countries which have got these significant communities of immigrants who have come from that part of the world unfortunately have a very small number who have been misguided enough or radicalized or brainwashed enough to start taking up this cause, which is not what the rest of our Muslim colleagues in our own countries believe in, far from it.

For example, the Muslim Council of Britain has come out very firmly against this activity.

CROWLEY: It seemed to me, looking at the numbers and looking at the geography, that the threat to Britain is every bit as big as it is to the United States. And we’re now hearing about it in apocalyptic terms from both your government and our government.

WESTMACOTT: You’re quite right. It is a threat to us.

And we have picked up 60 or 70 of these people over the last year at our borders coming back from Iraq and Syria, intending to do terrible damage to our own countries and our own societies.

Where is Britain? Well, we’re actually very active. And we are very present. We have done a lot of humanitarian drops. We are shipping arms and equipment to the Kurdish regional government. We have done a lot of support in terms of refueling aircraft. We are doing some intelligence and surveillance which has helped us to target the humanitarian drops, which British aircraft, as well as American aircraft have been providing.

We were involved in trying to help the Yazidis, you remember, who were under threat. We have made an offer to do a number of other things for the KRG. At the moment, the Iraqi government and the KRG are not asking us to do more than what we are doing. But we have responded very positively in a number of ways, with aircraft, with intelligence, with training, with nonlethal equipment.

And so I think it’s right to say that we are present alongside the United States, playing an active role.

CROWLEY: And if it should come to you from the United States, we really think the only way to get rid of ISIS, which is something that the chairman of the Joint Chiefs of Staff said last week, that the only way really to get rid of ISIS is that there would have to be some sort of assault on ISIS in Syria, is Britain in on that kind of — should it come to that, and the U.S. asks for British help in terms of air assaults, would Britain be there?

WESTMACOTT: Well, my prime minister and my foreign secretary have been very clear that we’re not getting involved in another Iraq war.

We’re also not supplying lethal equipment at this point, but, of course, should the Iraqi government or even the KRG ask us to do so, we would be prepared to look at that. We’re not contemplating a direct military action at this point. Of course…

WESTMACOTT: … we are closely engaged with the Iraqi government, which we’re giving a lot of political support.

WESTMACOTT: And, like the United States, we’re keen to see Iraq governed by a new and inclusive and less sectarian administration.

And once that is in place, if the Iraqi government comes to us and asks us to see whether there’s more that we could do, we would be prepared to think about that.

CROWLEY: Your foreign secretary said — quote — this morning in a piece, “At home and abroad, we must choke these barbarians on every front.”

What does that mean if it does not mean, at some point, taking on ISIS militarily with the United States, perhaps with others, in Syria or in Iraq?

WESTMACOTT: We have provided a lot of support, both behind the scenes and in terms of helping to supply military equipment to people in Iraq and Syria, who — and particularly in Northern Iraq, in the KRG, who are taking on, who are pushing back against ISIS.

At the moment, neither the Kurdish regional government nor the Iraqi government is asking us to provide lethal equipment. We have looked at providing assistance to the moderate opposition in Syria, because part of this is also about Bashar al-Assad’s regime, which have been behind, if you like, the situation, which has created so much of this.

We are not at this point providing lethal equipment to the opposition. And, to be honest, what has happened in Iraq and the way in which ISIS has scooped up weapons and money and other support which has been provided initially for the purpose of getting rid of Bashar al-Assad is an indication that that caution shown by my government and the United States government was perhaps well-founded.

But we’re keeping, of course, everything under review and what my prime minister, my foreign secretary this morning has said, which is that, in essence, we are in this together, and we need a joint operation to really push back against this barbaric behavior. We mean what we say on that.

CROWLEY: So that could include, at some point, but is not now included, the use of British force, along with the use of American force in the skies?

WESTMACOTT: It is not now contemplated.

But when I say allies on the ground, remember, this is not just something for the United States and the United Kingdom. There are many other regional governments which are threatened by ISIS which are pleased to see that there is now, fingers crossed, a new government coming into power in Iraq…

WESTMACOTT: … and who themselves, we like to think, will want to become involved in trying to push back against this horrific, barbaric organization which threatens their way of life, as well as ours.

CROWLEY: Sir Peter Westmacott, the British ambassador to the United States, thank you for coming by this morning.

WESTMACOTT: Thank you for having me.