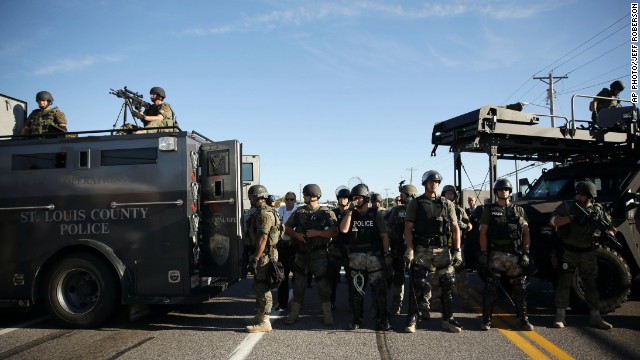 Ferguson’s Congressman Rep. Clay on State of the Union with Candy Crowley: Ferguson police were way too heavy-handed in the way they interacted with peaceful demonstrators.”

Today on CNN’s State of the Union with Candy Crowley, Ferguson’s Congressman William Lacy Clay (D-MO) and former NYPD Chief Bernard Kerik spoke to Crowley about the militarization of police in quelling protests. In an exclusive interview with CNN, Representative Clay stressed the need for the demilitarization of police forces. While former NYPD Chief Kerik diverged from this view, both agreed that police must undergo adequate training to properly use law enforcement equipment.

Rep. Clay on the militarization of local police forces: “Well, and the scenes that we saw in Ferguson, Missouri, this past week, with a militarized police force facing down innocent protesters with sniper rifles and machine guns is totally unacceptable in America. Now, I have gotten word that some of these police departments who have received this equipment have not been properly — properly trained in its use by the military.”

Rep. Clay on lack of diversity within the police force: “a bigger problem here in Ferguson and across this region and across America are that police forces who are in African-American communities are not diverse enough. They do not have enough diversity within their force. They do not have a healthy relationship with the African-American community that they are supposed to police.”

CROWLEY: I am joined now by former NYPD Chief Bernard Kerik and Congressman Lacy Clay, whose district includes Ferguson. Gentlemen, thank you both so much for being here.

Let’s pretend that everything Ferguson had, Congressman, actually came from elsewhere, that it’s not Department of Defense equipment. Attitudinally, there is a difference between a soldier who goes off to war to kill people and a policeman who is there to protect. Is this a question of equipment, or is this a question of attitude?

REP. WILLIAM LACY CLAY (D), MISSOURI: Well, it’s an issue that we need to have a national discussion about, the militarization of local police forces, and then when they are used to quell peaceful demonstration.

Then we have a problem, and especially around this entire case of the murder of Michael Brown at the hands of a Ferguson police officer.

CROWLEY: And, Mr. Kerik let me…

I was just going to have Mr. Kerik jump in, because can you make a case for having this equipment? I’m assuming that, lots of times, police are outgunned and need heavier equipment.

Then you go into a post-9/11 world and the terror threats that we face. Also keep in mind we have seen a substantial increase in the active-shooter scenarios in our schools, grammar schools, theaters, where police have to respond in a capacity that they have the equipment and the resources necessary to fight that threat. It’s absolutely needed.

CROWLEY: So, Congressman, how do you strike that balance? You don’t want your police force looking like they are seeing their citizenry as enemies. On the other hand, you do want them equipped for when they do actually face folks that they might see as enemies.

CLAY: Well, and the scenes that we saw in Ferguson, Missouri, this past week, with a militarized police force facing down innocent protesters with sniper rifles and machine guns is totally unacceptable in America.

Now, I have gotten word that some of these police departments who have received this equipment have not been properly — properly trained in its use by the military. So, that is a question that some of my colleagues in Congress have said that they are going to try to get answers to.

CROWLEY: Mr. Kerik, do you agree with that, that there maybe isn’t the proper training, and sometimes you should leave some of the equipment at home?

KERIK: Well, here’s the thing, that, you know, what we saw in Ferguson was more a riot control scenario.

But the one thing I will agree with the congressman on substantially is the training. You have departments around the country that receive a lot of this equipment from the federal government. They don’t have the real training necessary to use it. A lot of them don’t — they don’t know what they’re getting.

They don’t have the interoperability or intercommunications with the larger agencies. For example, in my state, the New Jersey State Police, the Newark Police Department, Jersey City police departments, they have major special weapons teams that train constantly.

But you have a lot of small agencies in New Jersey, 10, 15, 20 — 20 people on the department, that want a SWAT team. You know, it’s well-intended. Is it the right thing to do? I don’t necessarily think so.

CROWLEY: Congressman Clay, when you look at police actions — and, first, let’s just talk about the Ferguson police — now you have the state police who have moved in to take over.

Where do you think have been — and I’m assuming you do because I have heard you talk about it — the major blunders while trying to deal with both the shooting and the aftermath?

CLAY: Well, as far as major blunders, I think that, in the beginning of this week, Saint Louis County police and Ferguson police were way too heavy-handed in the way they interacted with peaceful demonstrators.

These demonstrators have a right to assemble in a peaceful manner, have a right to be heard. And it was very confrontational, and it shouldn’t have been. I think that, when Captain Ron Johnson came in from the Missouri Highway Patrol, then things began to level out, and he struck a good balance between law enforcement and interacting with these demonstrators.

We have to have a national conversation about how police forces should interact with the African-American community, who happens to be paying their salary, who want to be served and protected, who these officers are take an oath to do so.

Mr. Kerik, let me get you in on this. When you watched this unfold, what struck you? And was there a part of you that just went, wow, that was a huge mistake? KERIK: Well, I think some of the weaponry I saw initially, early on, but, you know, listen, I hate to Monday-morning quarterback these things.

KERIK: There were Molotov cocktails thrown.

There was personal and — or property that was damaged. The police have to respond to that. You can’t let the thugs take over the city. We saw that the other day. The police had to respond. Were they heavy-handed? I wasn’t there. I don’t know. Some of the weapons I saw I don’t think were needed.

Peaceful demonstrations should be peaceful. The police can do their job, but when the thugs try to take over the community, the police have to act and do whatever they have to do to keep the peace.

CROWLEY: Because we have not seen the officer involved in this killing, there has been no one to speak for him. But you — or to say we have got pieces of his side of the story — we have eyewitnesses that say something completely different.

What’s he going through right now? You have been through this sort of thing with officers you have overseen.

CROWLEY: Congressman Clay, I’m going to give you the final word on this.

You have called this a murder. And I understand. And this is an unarmed 18-year-old shot by a policeman. That much, we know. There’s a difference of opinion about what led to that. But the day in court, should it come to that, are you already sort of usurping that by calling it a murder?

CLAY: I don’t think I’m usurping it by calling it a murder.

And I will say this. And I made a commitment and a promise to Ms. McSpadden, Michael Brown’s mother, that I will pursue justice with the family at every avenue, be it on the federal level or at the state level.

Now — and so, you know, what happened Friday with the police Chief Jackson releasing the name of the officer and releasing those photos of Michael Brown were totally unrelated to the incident. We should not lose focus of the incident, but you had an 18-year-old person walking in the street…

CLAY: … who was eventually gunned down after he raised his arms to surrender to police.

So that has to be addressed. And I want the legal system to take its course.

CROWLEY: Congressman Lacy Clay, thank you so much for joining us from Ferguson this morning.

Bernard Kerik, thank you for coming in.

CROWLEY: We appreciate your input.

CLAY: Thank you for having me.