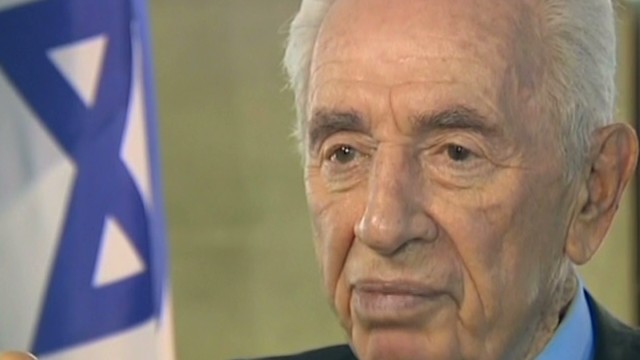 Shimon Peres to CNN’s Wolf Blitzer: “If they continue to fire rockets, they’ll get back rockets.”

CNN’s Wolf Blitzer sat down today with former Israeli President Shimon Peres to discuss a potential cease-fire, the peace process and more. A preview of Blitzer’s interview aired on CNN’s New Day and additional portions will air in the 5 p.m. ET hour of The Situation Room with Wolf Blitzer. Full program transcripts are posted on http://archives.cnn.com/TRANSCRIPTS/.

WOLF BLITZER, CNN HOST, “THE SITUATION ROOM”:  I Just emerged from a lengthy, wide-ranging interview from THE now former president of Israel, Shimon Peres.  This is his first television interview since leaving the Israeli presidency, and he was effusive any of his praise for President Obama, Secretary of State John Kerry.  He also very effusive in his praise for the Palestinian Authority president Mahmoud Abbas.  On that issue, he disagrees clearly with the Israeli prime minister Benjamin Netanyahu.

BLITZER:  How do Israel and Hamas achieve a cease-fire?

PERES:  I mean, first of all, we have to get rid of the problem of the tunnels.  No government, I mean outside (ph) government, can stop the fighting before every mother this country will be sure that, at the night, somebody won’t jump out of the earth and kill her and her children.  That’s impossible.

Now, the second problem is — ones who should answer this one, who is the leader (INAUDIBLE) government of Gaza?  It’s not clear.

PERES:  Hamas was not elected to govern in Gaza, no, sir.  The agreement of peace was signed, Palestinian Authority was signed between the people (ph) and us.  Israel on one side and — I signed on the Israeli side and Abu Mazen on the Palestinian side.

BLITZER:  So let’s say there’s a cease — let’s say they finish, Israel finishes destroying the tunnels.  What do you do next to achieve a cease-fire?

I think Hamas made a priori mistake with the tunnels.  It was a waste of strategy and a waste money.

BLITZER:  What about the rockets and the missiles?

On top of it, we must have a responsible address, because they are not responsible, the Hamas.  They are divided as the military arm.  There is a political arm.  And I think there is a candidate for it, and it is Abu Mazen.

BLITZER:  That’s President Mahmoud Abbas of the Palestinian Authority.  You trust him.

BLITZER:  You think he’s a good partner for peace with Israel.

PERES:  Yes, I know him for 20 years recently (ph), and I’m not a psychologist.   I’m not trying now to analyze his character, but I respect by the way he behaved.  He got the courage, more than any other Arab leader, to stand up and say, “I’m against terror.  I’m against kidnapping.  We have to bring — let the boys that are kidnapped go back.  I’m for peace.”

And then say — in English, in Arabic he said something else.  So he went to Saudi Arabia in front of the Arab League.  He made it in Arabic, clear and loud.  And as so, he builds a force with our permission and with UAE aid (ph) of 15,000 men that are policing the territories which are under his —

BLITZER:  You would like to see the Palestinian Authority led by Mahmoud Abbas in charge not only of the West Bank but also Gaza.

PERES:  Hundred percent.  I don’t think that two countries can bring peace.  Two countries will continue war.  I told Hafat (ph) if you left two guns, we will not have one people.  We cannot have two guns.  There must be trust on government that controls the shooting and build the country.

BLITZER:  And President Shimon Peres, he also insisted that, once there’s a cease-fire, he’s still optimistic that down the road there can be this two-state solution which he strongly supports, Israel living alongside Palestine.

He is grateful, he says, to the leadership of President Obama, Secretary of State John Kerry.  He knows there have been some strains between the Obama administration and the Prime Minister Benjamin Netanyahu government.  He says that’s inappropriate.  He wants to work to make sure that U.S.-Israeli relationship is strong.

We got into a whole bunch of other issues, including the rise of Jewish extremism here in Israel.  He’s very passionate about that.  Much more of the interview coming up later, but as you can see despite the age of 90, he’s still very forceful in his thoughts.  Guys, back to you.

BLITZER:  When you see the pictures of what’s happening in Gaza right now, the enormous number of civilians, children, elderly, women who have been killed over the past three — this is now week four of this war, the criticism of Israel is that it’s reacted disproportionately.

SHIMON PERES, FMR. PRESIDENT OF ISRAEL:  Well, I don’t know in that case what is a proportion.  Imagine that you seat a child on your knees at a terrace and somebody is shooting at your child and yourself.  What is a proportion?  Not to shoot back?

I mean, they put to us an impossible question, but we cannot escape it.  We wish we wouldn’t have to do it.  We have nothing against the people.  We don’t like to see anybody being killed.  It’s not our purpose, but if they put it in the homes, with the children, and there then they plant the rockets and the different weapons they collected, what the can we do?

BLITZER: The White House and the State Department both have said Israel can do more to prevent civilian casualties.

SHIMON PERES, FMR. PRESIDENT OF ISRAEL:  To the best of my knowledge, Israel is trying to do so.  I spoke with many pilots, many fighters.  They’re unbelievably aware of it.  But, you know, their place is dense.  It’s a small place, extremely densely populated, and they made every place a part of their front.  They planted mines.  They put in explosives in houses.  If you touch, the house exploded.  I mean, it’s unbelievable.

BLITZER:  Is the criticism here in Israel of President Obama and Secretary Kerry and their role in this current crisis justified?

PERES:  Look, I know President Obama quite well, and also I know Secretary Kerry for many, many years.  The president is a responsible friend of Israel.  He answers many of the questions about the domain of defense and security.  So if he has a remark, he may have his remark, but we shall not forget that basically is a great friend and a good friend, and I trust him.  And I don’t mind to hear criticism from a friend.  I hope he doesn’t mind to hear too. I mean, friendship is not just that all the time flirting.

But basically I trust him.  I think he’s an outstanding person.  I think he tries to bring an end to all the wars, and carries the sworn friend of Israel.  You know him and I known him for many years.  So I believe America is a friend, and I think friendship is more important than gossips.

BLITZER:  Do you think the current government in Israel led by Prime Minister Netanyahu is still committed to a two-state solution, Israel and Palestine?

PEERES:  Yes, for many, yes.  They think that — I mean what I hear from the prime minister is the things that Abu Mazen is not capable of doing it.  And here are my view, it’s totally different.  I think we should not find a better man to do so.

BLITZER:  You disagree with Prime Minister Netanyahu on that issue?

PERES:  Yes.  I notice that Prime Minister Netanyahu recently also is beginning to change his mind, vis-a-vis Abu Mazen, too.  But I say it with certainly: I know the man.  I experienced — look, I wish that everything would be done in an (INAUDIBLE).  Unfortunately life is more complicated.

I didn’t choose my optimism and I think that Hamas wasted money, wasted goodwill.  It’s not a surprise that they are isolated by the world (ph), not only by us.