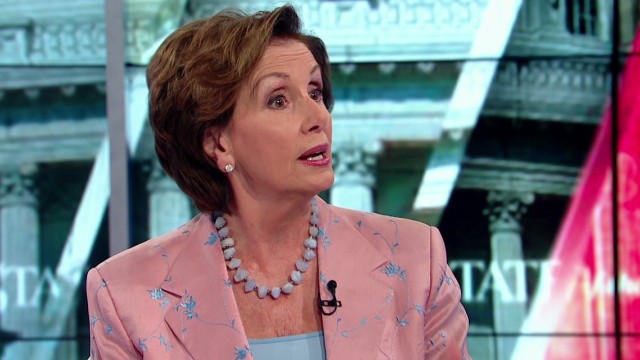 CROWLEY: With me now on a busy Sunday morning, House Democratic Leader, Nancy Pelosi, it’s very good to see you.

CROWLEY: I want to talk about presidential leadership here. You know, growing up, it was always the leader of the western world now we’re the world’s only superpower. And yet the president is taking a lot of criticism at this point for seeming to be sitting on the sidelines. He’s out fund raising and the world seems to be blowing up. I know you were with him at a couple of these fund-raisers.

So, you know, the optics of this and you know, photo-ops matter, optics matter. Have they (INAUDIBLE) on the White House on this?

PELOSI: First of all let me disagree with the — when we were growing up, you after me, but we were in a bipolar word, the Soviet Union and the United States. It’s a much more complicated situation now and the president’s leadership has been strong. And the issues you are dealing with this morning, the president was in the lead on supporting Iron Dome and asking for more resources now to help Israel defend itself, which it has as right to do.

In the lead for asking for humanitarian assistance for the Palestinian people, $47 million to go through the U.N. to help those calling upon others to help negotiate not only a cease-fire, but a peace there. The President and Secretary Kerry’s presence there is a manifestation of the President’s commitment because it’s a sustained high level commitment of the secretary of state representing the administration.

When it came to the Ukraine, the president, early on, called for sanctions. And then last Wednesday, before the plane was shot down, the president asked for sector sanctions, even stronger ones.

CROWLEY: But the notion — the notion that Putin sort of sized up President Obama and said, he backed off on Syria, he’s playing footsy with Iran, he’s a softie. He’s not going to stop me. Has anything happened that should dissuade Putin from that?

Some of what we see comes from insecurity. Putin, for all of his — is insecure about Russia’s role in the world now. What’s happened in Eastern Ukraine, the shooting to begin with, the aggression and then the complicity.

And by the way, the administration early on getting out there and saying we have the intelligence to say that these rockets had a provenance in Russia as well as the ability to launch them. So, nobody is missing in action in all of this.

And as far as Putin is concerned, he’s a KGB guy who happens to be the president of Russia and he’s going to do what he’s going to do no matter who else is in charge any other place in the world. So, I would not judge his actions or his motivations by anything other than he is rooted in the KGB, insecure about Russia’s diminished role in the world. CROWLEY: Right. But certainly closing waves globally at this point.

I want to move you to the Middle East and ask you your comfort level with what you are seeing on television. Again, the headlines versus the ground.

PELOSI: Well again, as we all have said, any country has a right to defend itself when it is under assault and so, too, does Israel. You have been there. You know the proximity. Everything is very, very close to each other. And so, a threat is a proximate threat. It’s there.

Again, I repeat that, thank God for Iron Dome which has diminished the casualties that would have been caused if these rockets or missiles were coming in —

CROWLEY: Have they gone too far? Does it look as though Israel has gone too far? You heard Ben Rhodes, from the president’s — Deputy National Security Adviser, who said, we told them — we think they could be doing more. Should Israel be doing more to protect civilians in Gaza?

PELOSI: Well, we all — war is a deadly thing. And I have many Palestinians who live in my district and I am hearing them regularly about how their families are affected who live in the region. It’s a terrible thing. But let me just say that any missile that comes from someplace has a return address. And if Israel is responding to that address, then that’s a shame that the Palestinians are use — are rumored to be using children and families as shields for their missiles.

Should we all try to, first of all, avoid conflict, the Hamas initiated this. So again, this has to be something where we try to have the two-state solution, that we have to support — we have to support Abbas and his role as a leader there. We have to support Iron Dome to protect the Israelis from the missiles. We have to support the Palestinians and what they need. And we have to confer with the Qataris, who have told me over and over again that Hamas is a humanitarian organization, maybe they could use their influence to –

CROWLEY: The U.S. (INAUDIBLE) organization though, correct, to you?

PELOSI: We’ve had that discussion.

CROWLEY: I have to leave it there. I hope you will come back and we will talk politics and mid-term and all kinds of things going on (INAUDIBLE). I appreciate your time.. PELOSI: I think it’s important to note though, that through all of this, the Republicans are trying to sue the president on a path to impeach the president while we’re trying to create jobs and have stability in our country and in the world. And I’m sorry that we didn’t get a chance to talk more about that.

CROWLEY: We will do that the next time, I promise. Thank you so much.

CROWLEY: I really appreciate it.