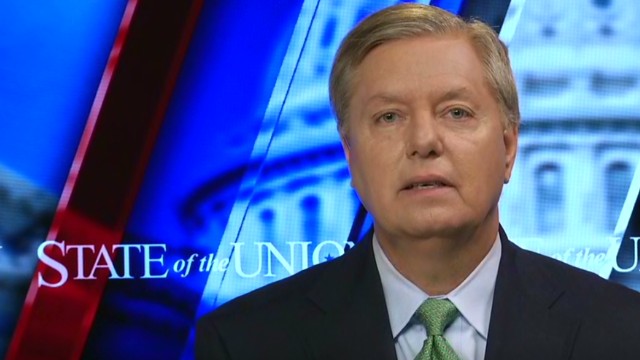 Graham: Obama has been ‘AWOL’

Today on CNN’s State of the Union with Candy Crowley, Senator Lindsey Graham (R-SC) spoke with Crowley about President Obama’s responses to world crises, Vladimir Putin, and the Israeli-Palestinian conflict.

CROWLEY: With me now, Senator Lindsey Graham of the Armed Services Committee.

Senator, it is good to see you and thank you so much for…

I want to talk to you first about this notion of leadership and the idea that the world really has changed. It’s not as simple as the bad guys are in the Soviet bloc and behind the iron curtain and the good guys are in the West. It is now a very complicated world which kind of defies a title of leader of the Western World. How much of this do you ascribe to changing times?

GRAHAM: You know, I think what we’ve learned from these changing times that without American leadership the world disintegrates pretty rapidly. I said last week, America is the glue that holds the free world together. When you see us missing or AWOL as President Obama’s been, you see fracturing on multiple fronts.

Russia is more aggressive, not less. The sanctions clearly are not working. Hamas is demanding open borders. Show me a statement by Hamas leadership that recognizes the right for Israel to resist, then I would consider that request.

These are stark contrast and we’re not responding. Passive responses to naked aggression all over the world is our foreign policy. Look what ISIS has been able to do in Syria and Iraq. Without American leadership, the world gets to be a very dangerous place and our allies, like Israel and Ukraine, suffer.

CROWLEY: Well, you know, I think that the White House would argue, and has argued and said, you know, first of all, it now sounds as though they’ve finally gotten the European allies, including Germany, to agree to stiffen up their sanctions because, in the end, it’s more their problem in their backyard than in the U.S. backyard.

GRAHAM: Well, let’s look at it this way. Russia has dismembered the Ukraine, a neighboring nation. It is intimidating its neighbors. Russia has seized territory from the Ukraine.

Here’s what I fear with this passive response. With the Ukraine, if it could go back in time give up nuclear weapons. This lack of decisive action. The Ukraine has asked for weapons to defend itself for months and we’re still thinking about it. The Europeans can’t lead without America setting the standard. They’re a dysfunctional political organization, Europe is. And without American leadership organizing Europe and the world you see people like Putin who has an economy the size of Italy. He’s playing a poker game with a pair of 2s, and winning. You see Iraq and Syria become safe havens for some of the most deadliest terrorists in the world who directly threaten our homeland. You see Israel under siege. CROWLEY: Senator, what would you have him do? He can’t (INAUDIBLE) — I mean, you want a more aggressive response. He’s been talking to…

CROWLEY: …the European allies. We don’t — no one here I think —

GRAHAM: Can I get a shot at what –

I would when it came to Israel, condemn the U.N. human rights report that holds his role responsible for the activity here. The U.N. human’s right report is a joke. The U.N. has becoming more anti- Israeli, anti-Semitic. I would push back, Congress will do this, Schumer, Menendez and myself, we’re going to push back against this report. When it comes to Syria and Iraq, I would come up with a military game plan in coordination with the regional allies to stop ISIS from growing in strength. I would push political reconciliation in Baghdad but I’d come up with a military plan to stop these terrorist organizations from growing in strength before they hit our homeland.

CROWLEY: Senator Graham, I’m afraid I will have to stop it there before I run into Fareed’s show but I want to thank you very much for taking time out of your day. I appreciate it. I hope you will come back and we’ll be right back.