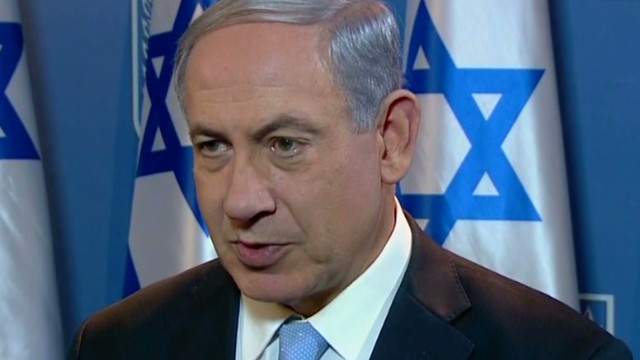 Netanyahu to CNN’s Wolf Blitzer: “I support taking whatever action is necessary to stop this insane situation…”

Today on CNN’s State of the Union with Candy Crowley, Israeli Prime Minister Benjamin Netanyahu spoke to Wolf Blitzer about the ongoing conflict between Israel and Hamas, and the extended nuclear talks with Iran.

Netanyahu on the possibility of reoccupying Gaza:  “Well, I support taking whatever action is necessary to stop this insane situation.  Just imagine — I mean, imagine what Israel is going through.  Imagine that 75 percent of the U.S. population is under rocket fire and they have to be in bomb shelters within 60 to 90 seconds.  So, I’m not just talking about New York — New York, Washington, Chicago, Detroit, San Francisco, Miami, you name it.  That’s impossible.  You can’t live like that.  So I think we have to bring back, restore back a reasonable, sustained quiet and security.  And we will take whatever action is necessary to achieve that.”

Netanyahu on Hamas targeting civilians: “They’re not only targeting our cities.  They’re deliberately firing thousands of rockets.  They have already fired 2,000 rockets in the last few days on our cities.  You can imagine this.  It’s not only that.  And they wanted to kill as many of our six million Israelis who are targeted as they could.”

Quick question.  Your exit strategy from Gaza, what is it?

I mean, we didn’t seek this escalation.  Hamas forced it on us.  They started rocketing our cities, steadily increasing the fire.  I called for de-escalation.  They refused.  I accepted an Egyptian cease-fire proposal backed up by the Arab League and the U.N.  They refused.

I accepted a humanitarian lull proposed by the United Nations.  They refused.  We will stop our operations when we can bring back quiet to our people.

BLITZER:  Some of your Cabinet ministers think the only way to do that is to reoccupy Gaza, which you evacuated from and gave it up back in 2005.  Do you support reoccupying Gaza?

NETANYAHU:  Well, I support taking whatever action is necessary to stop this insane situation.

Just imagine — I mean, imagine what Israel is going through.  Imagine that 75 percent of the U.S. population is under rocket fire and they have to be in bomb shelters within 60 to 90 seconds.  So, I’m not just talking about New York — New York, Washington, Chicago, Detroit, San Francisco, Miami, you name it.

That’s impossible.  You can’t live like that.  So I think we have to bring back, restore back a reasonable, sustained quiet and security.  And we will take whatever action is necessary to achieve that.

BLITZER:  But that includes possibly reoccupying Gaza?  Because a lot of your military planners are afraid of what they would call a quagmire, a dangerous quagmire.

NETANYAHU:  Nobody wants to go to excessive military plans, but what is happening here is excessive.

They’re not only targeting our cities.  They’re deliberately firing thousands of rockets.  They have already fired 2,000 rockets in the last few days on our cities.  You can imagine this.  It’s not only that.  And they wanted to kill as many of our six million Israelis who are targeted as they could.

They haven’t succeeded not for lack of trying.  It’s because we have developed, with American help — and I appreciate the help that President Obama and the U.S. Congress have given us to develop these Iron Dome, fantastic systems.

But some of the missiles perforate.  And they hit our schools.  So we have to stop that.  But, in addition to the rockets, they have got now terror tunnels that they build in Palestinian homes in Gaza.  They penetrate underground into Israeli territory.

Terrorists pop up there, try to murder civilians, kidnap Israelis, as they did with Gilad Shalit.  So we’re taking action right now to neutralize those tunnels.  And we will continue the action as long as is necessary.

BLITZER:  You see these painful pictures, though, of these Palestinian children and these refugees, thousands of them fleeing their homes.  It’s a horrendous sight, what is going on right now, if you look at the images, heart-wrenching.

What goes through your mind when you see that?

What choice do we have?  We have to protect ourselves.  So we try to target the rocketeers.  We do.  And all civilian casualties are unintended by us, but intended by Hamas.  They want to pile up as many civilian dead as they can, because somebody said they use — it’s gruesome.  They use telegenically dead Palestinians for their cause.  They want the more dead the better.

BLITZER:  The argument that your critics make is that you’re overreacting right now, overkill.

NETANYAHU:  Well, look, I want to say this.

I mean, there are very few examples in history of countries that have been rocketed on this scale.  If you look at our response, it’s actually very measured and trying to be as pinpointed as we can.  But I think, when people say that — I appreciate the support we have received from President Obama and many world leaders for Israel’s right to self-defense.

But others are saying, yes, you have the right of self-defense, as long as you don’t exercise it.  What can a country do?  What would you do?  What would the people of the United States do if — if your cities were rocketed now, 2,000 rockets falling in American cities?

BLITZER:  But it is brutal there now.

NETANYAHU:  It is very difficult because Hamas is using them, Palestinians, as human shields.

We try to target the military targets.  And, unfortunately, there are civilian casualties, which we regret and we don’t seek.  They all fall on the responsibility of Hamas.

BLITZER:  The president, President Obama, he urged you the other day to — all the parties to return to the cease-fire that was reached in November 2012.  Are you accepting his proposal, go back to that cease-fire?

BLITZER:  If Hamas were to say to you right now, we accept the cease-fire, would Israel withdraw its forces from Gaza?

NETANYAHU:  That was the Egyptian proposal, which we accepted and they refused.

BLITZER:  If they accepted now — is it too late?

NETANYAHU:  I don’t know.  I don’t want to speak about it being too late.  I think the first thing is a cessation of hostilities, but then we would have to get into…

BLITZER:  Would Israel withdraw its forces as part of a cessation of hostilities?

NETANYAHU:  Well, we would get into — I believe — first, we have to deal with this tunnel business, because we’re not leaving those tunnels…

BLITZER:  So, you would stay until those tunnels are destroyed?

NETANYAHU:  We’re doing that right now, as we speak.

BLITZER:  How long is that going to take?

Gaza, under all the previous agreements, should have been demilitarized.  Instead of being demilitarized, it became basically an Iranian-financed and equipped fortress of terror, with thousands and thousands of rockets and other weapons being smuggled and developed in it.

That has to stop.  Those tunnels have to be shut down.

BLITZER:  I have been here in Israel for, what, 10, 11 days.  And many Israeli friends have said to me they are deeply concerned about what they see in this rise, tiny, but very violent and dangerous Jewish extremism in Israel.

NETANYAHU:  Well, you know, here’s the difference.  We don’t glorify these killers.  We put — we apprehended him in three — three days after the — that tragic killing, immediately put them in custody.

We’re putting them on trial.  They will serve a good chunk of their lives in jail.  That’s what we do with the killers.  We don’t name public squares after them.  We don’t glorify them.  We don’t educate our people, our children in suicide kindergarten camps, as happens in the Palestinian side.

I mean, the Hamas leaders are divided into two.  Those who are under — in underground bunkers in Gaza, they don’t care.  Let the people there, you know, with the rocketeers and with the attack tunnels, let them die as Israel tries to surgically take them out.  But they’re safe underground, the military leaders.

And then they have got the political leader, this guy Khaled Meshaal, who is roaming around five-star hotel suites in the Gulf states, having the time of his life, while his people, while he’s deliberately putting his people as fodder for this horrible terrorist war that they’re conducting against us.

So this has to stop.  And I think many people in Gaza understand that Hamas is destroying Gaza, destroying their lives.  They have taken tons — not tons — tens of thousands of tons of concrete that we enable them to bring into Gaza to build skyscrapers, to build schools, to build hospitals.

You know what they did with that, Wolf?  They put 700 tons of concrete into each one of these terror attack tunnels to penetrate Israel.  Now, we have discovered dozens of them.  So you’re talking about tens of thousands of tons of concrete, instead of going for the benefit of the school, the population, is going for terrorism against Israel.

I think it — I think the international community has to — once this is put in place, we really have to undertake a program to demilitarize Gaza and to change the situation, because it’s unacceptable.  What makes it unacceptable is Hamas and Islamic Jihad.

BLITZER:  We’re out of time, but one final question on Iran.

Now that the U.S., the five permanent members of the U.N. Security Council, Germany, they have agreed to a four-month extension, allowing these talks with Iran and its nuclear program to continue, does that mean a unilateral Israeli military strike potentially is off the table over the next four months?

NETANYAHU:  Now, you know I never talk about — about what Israel will do or not do.

But I think what is important is that there wasn’t a bad deal, because there’s no deal.  And no deal is better than a bad deal.  We will see what the extension produces.  I think a good deal is what was achieved with Syria.

They’re under the threat of U.S. military action.  And with the joint effort by President Obama and President Putin, Syria removed its chemicals and the capability to make chemical weapons.  They didn’t just keep it in place, freeze it, and put it under a lock and put an inspector on it.  They actually dismantled and removed.

That’s not what Iran is holding out for.  Iran wants to keep its capabilities and say, we will put a lock under and you can inspect it.

But the whole idea for them is that, at a certain point, they break the lock.  The inspector will even say they broke the lock.  It will take him a few weeks to put together the wherewithal for a nuclear bomb.  That’s a bad deal.  Don’t make that deal, because if you think the Middle East is bad now, with ISIS, with Hamas, with Hezbollah, and with Iran, wait until Iran, one of the pre — the preeminent terrorist state of our time, has nuclear weapons.

Then I would say the world goes into a tailspin.  Don’t let it happen.

BLITZER:  Mr. Prime Minister, thanks very much for joining us.

Tags
State of the Union with Candy Crowley / Wolf Blitzer