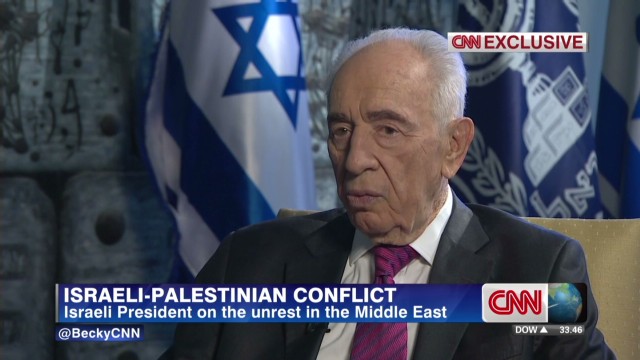 “We didn’t start the war today, they started it already several days ago,” Peres said Wednesday in an exclusive interview with CNN’s Becky Anderson (@beckycnn). “We warned them, we asked them to stop it…we waited one day, two days, three days and they continued, and they spread their fire on more areas in Israel.”

He also said that a ground offensive on Gaza “may happen quite soon.” Referring to rockets being fired from Gaza, Peres said “if they will stop for example tonight, there won’t be any ground entrance – but if they will continue, sooner or later this will be the response.”

FULL TRANSCRIPT:
Becky Anderson: With respect, Israeli strikes have killed 37 Palestinians since Monday, according to Palestinians …under what circumstances do you believe – or do you know – that a ground offensive will begin?

Shimon Peres: If they won’t stop their missiles, there will be a ground attack, I am not going to tell you when and where but that’s the logical conclusion.

BA: The world should expect to see a ground offensive at any time from the Israelis? You’ve called up reservists,

SP: Whatever we can do without ground forces, we shall do. So we waited. We didn’t start the war today, they started it already several days ago. We warned them. We asked them to stop it. Stop shooting. No shooting We waited one day, two days, three days and they continued, and they spread their fire on more areas in Israel.

BA: How long will Israel wait?

SP: Until the moment we shall reach the conclusion that it should be the next step. We shall not [inaudible]. It may happen quite soon.

BA: It could happen quite soon?

SP: I can give you only a general estimate, I can’t and I won’t give you [inaudible]. If they will stop for example tonight, there won’t be any ground entrance but if they will continue, sooner or later this will be the response.

BA: There are those that say that he doesn’t negotiate, and I’m alluding here to Benjamin Netanyahu. That he has four positions: Iran, Iran, Iran, and ‘I don’t have a legitimate Palestinian to negotiate with.” Do you understand those concerns and criticisms?

SP: About Iran, we agreed to the negotiations that President Obama started and he like all of us said that whatever can be achieved without a war, it’s better. If American can reach an understanding with Iran without a war, who wants a war? No body here is crazy to go shooting. When it comes to the partner, I disagree with Mr. Netanyahu, I think Abbas is a partner.

BA: As you retire from the presidential palace, are you concerned that Israelis and Palestinians will forever be stuck in a cycle of violence?

SP: Oh no, oh no, we will reach peace. I don’t imagine Palestinian mothers or Israeli mothers will forever pray that her children will be at war all their lives and they will die [inaudible]. Nonsense, we are all of us human beings. And you know I started the peace negotiation with the Palestinians. Half way we went. I participated or even initiated negotiations with Jordan and we achieved it. And also with Egypt. It occasionally takes a long time. It occasionally takes a short time, because the conditions are different in every place.

BA: The latest ratcheting up of violence here in the holy land has come as a result of the abduction and murder of 3 teenage Israeli boys and the subsequent murder of a Palestinian boy some say allegedly in retribution for the teenagers who were killed – clearly a tragedy to both families, what is your message to the families?

SP: My message is blood divides, tears unites. The very interesting accompanying spirit on that occasion is that the Jewish mothers who lost their children called up Arab mothers who lost their children and vice versa – there was empathy and understanding on both sides. I don’t think that anybody was really happy. Unfortunately we had both blood and tears. And I wish that the amount of blood will go down and the tears will be tears of happiness, not tears of regret and sorrow.